Yachts For Sale In Myrtle Beach

Kings Highway, the main north-south route running parallel to the beach, was originally an Indian trail before European settlement of the “Grand Strand.” The road spanned from Boston, MA to Charleston at its zenith, and had the honor of George Washington traveling on it when he visited the area in 1791. The earliest attempts at exploration and settlement was by the Spanish but failed due to ravaging diseases. English colonists settled the area in the latter 1600s and established trade, which attracted pirates, notably Edward Teach a.k.a. “Blackbeard” and local pirate “Drunken Jack,” to intercept and plunder cargo vessels. With so many coves, islands and inlets, the Myrtle Beach area (and all the lowcountry of South Carolina) provided ideal cover and hiding places. Colonists formed Prince George Parish that became Georgetown in 1730, South Carolina’s third oldest city. Lowcountry Georgetown became the center of Colonial rice commerce. 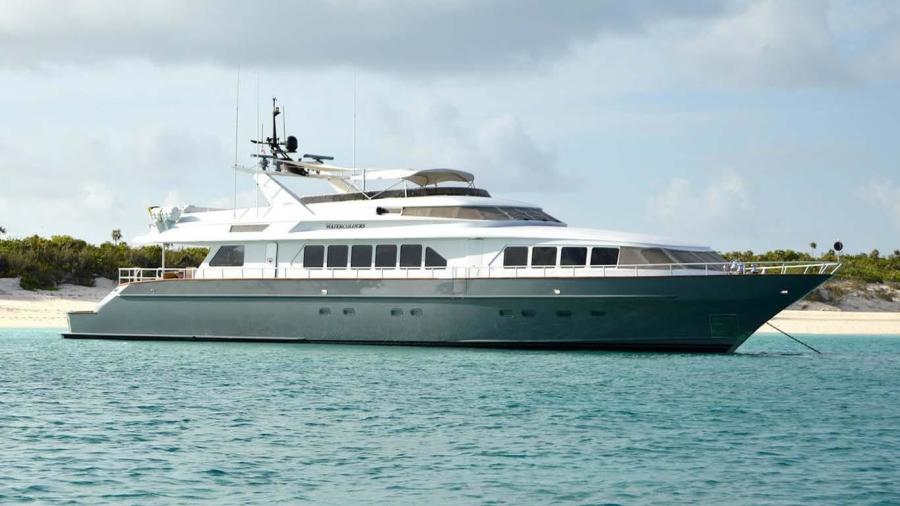 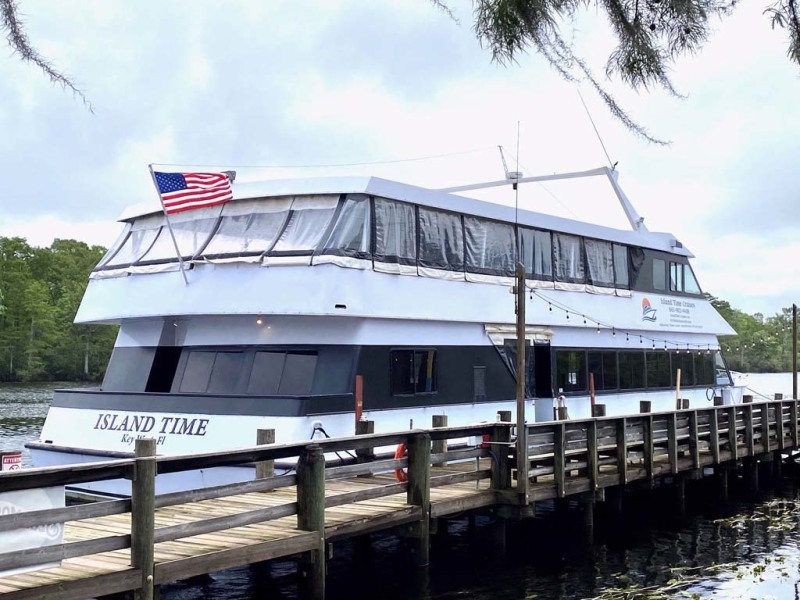 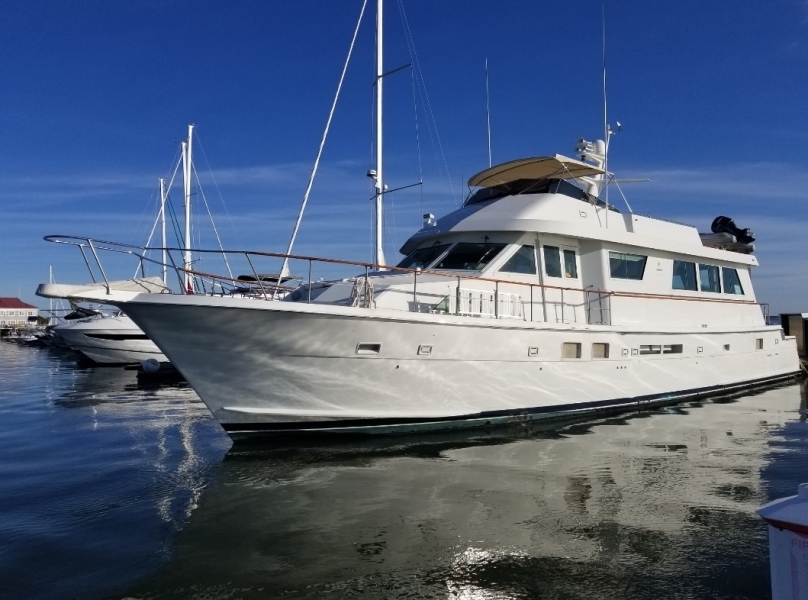 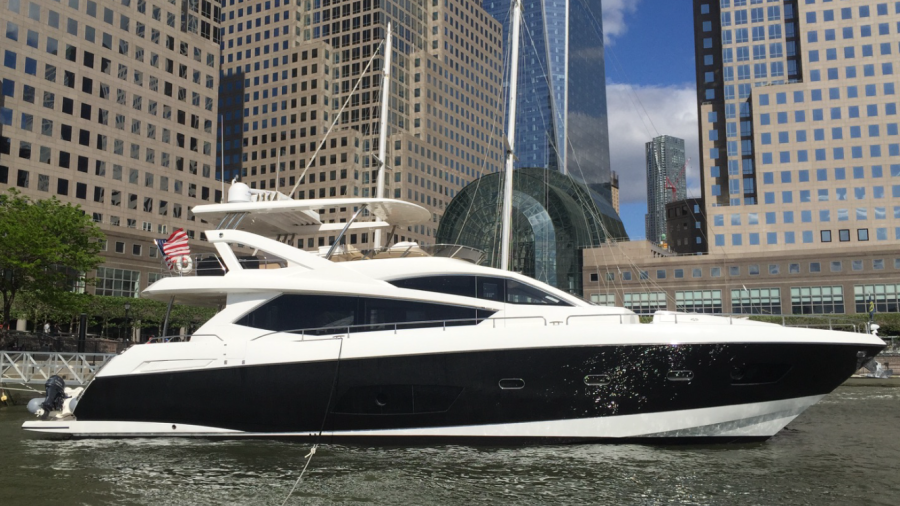 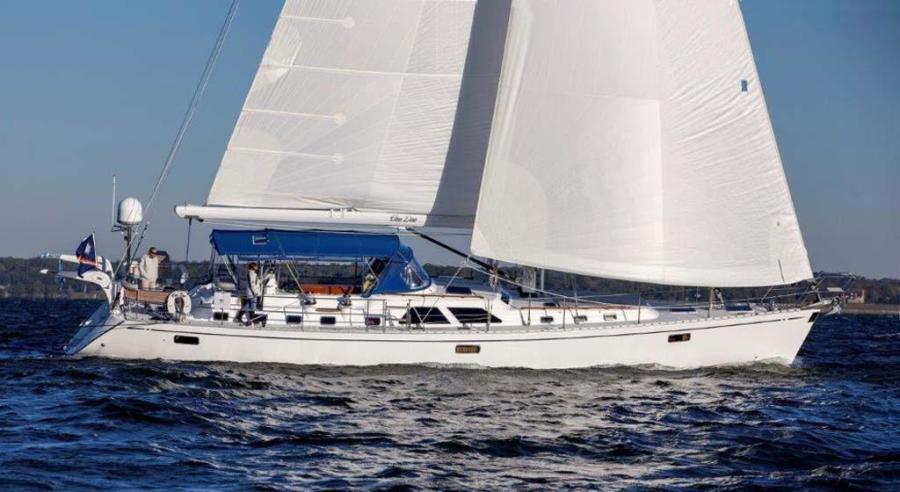 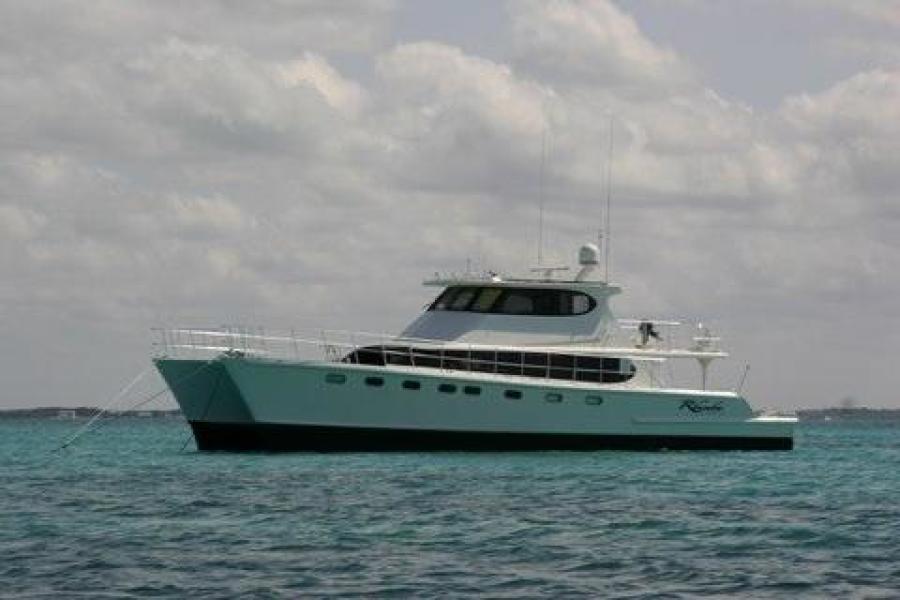 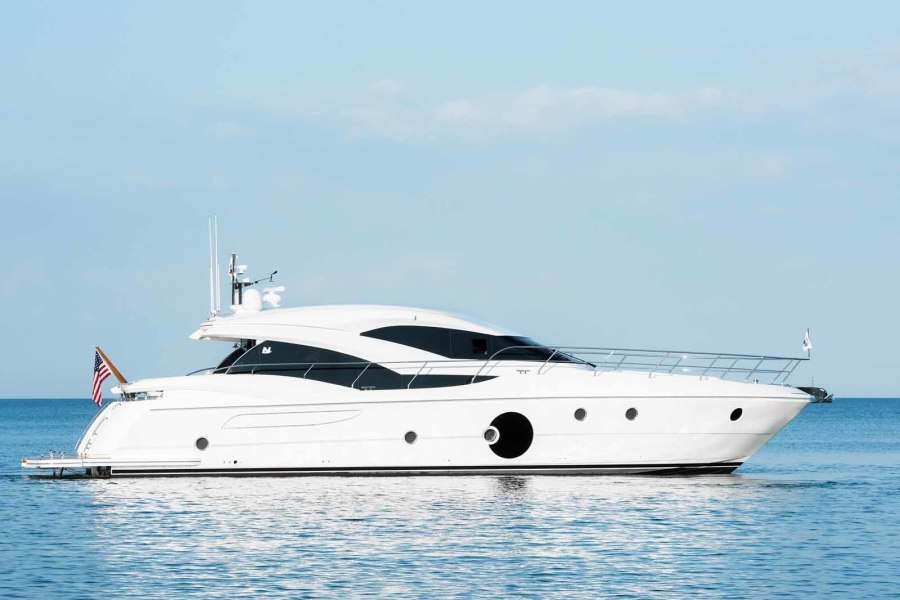 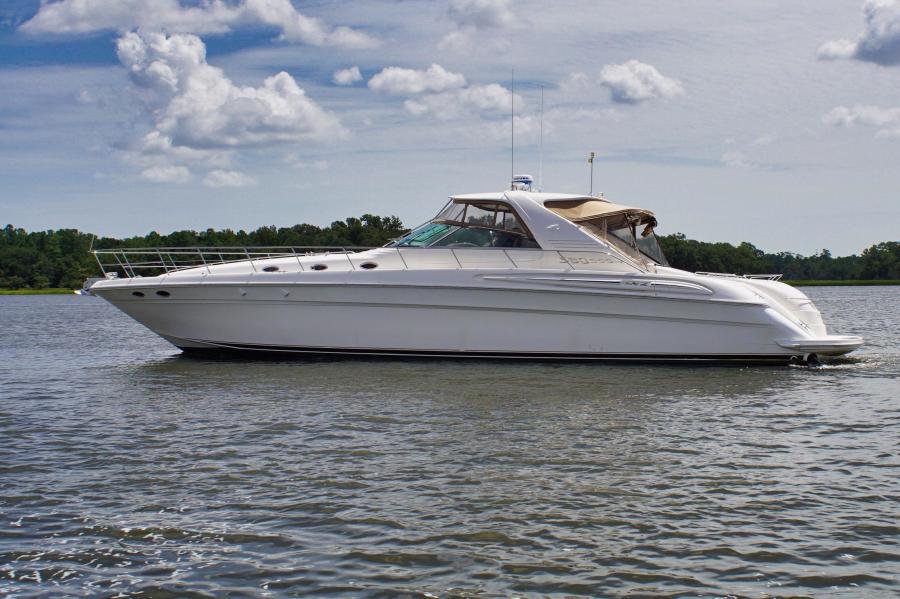 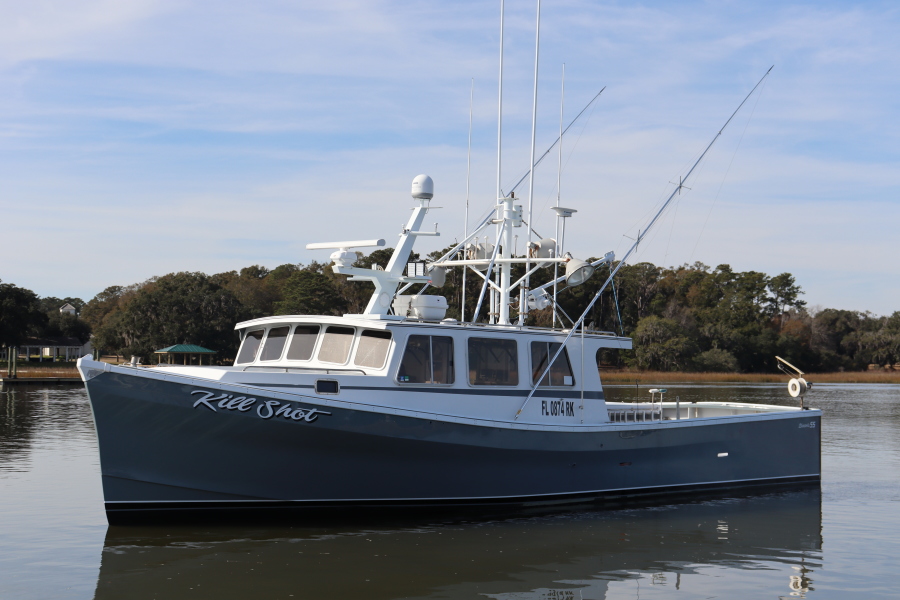 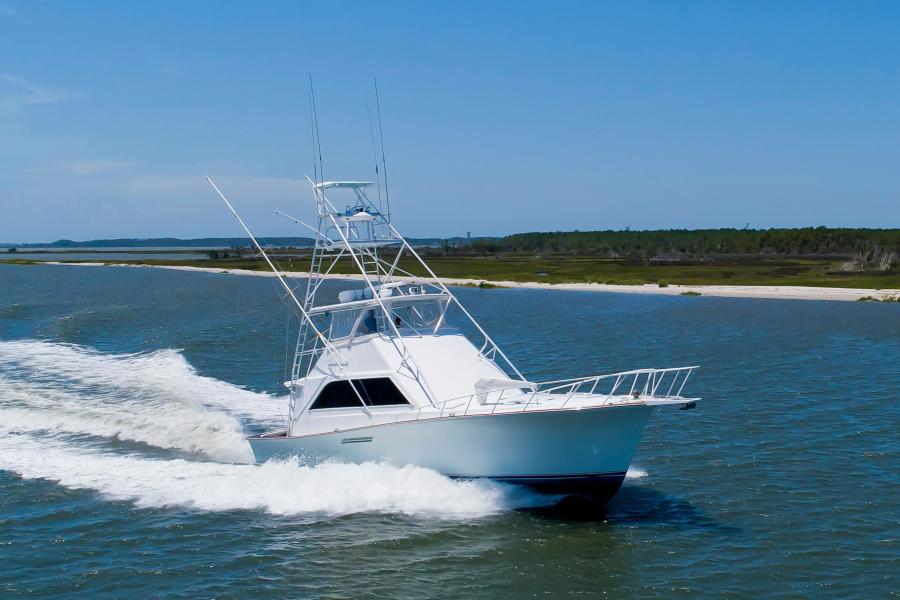 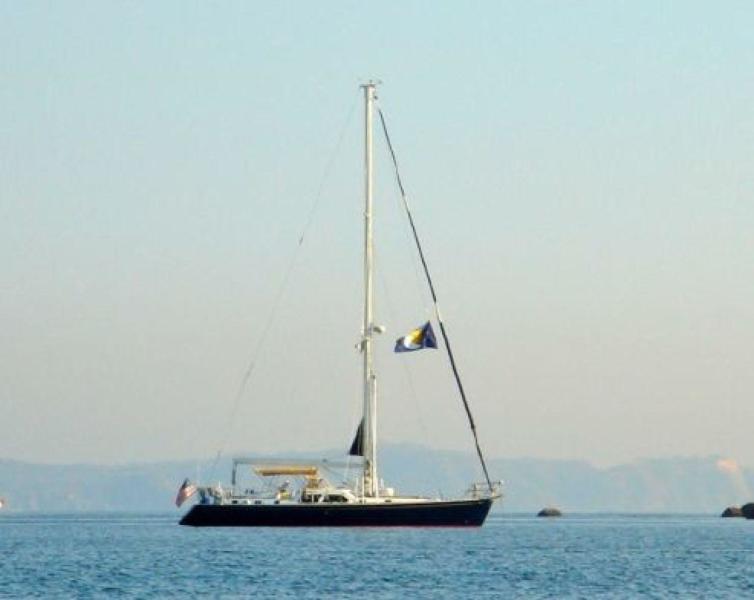 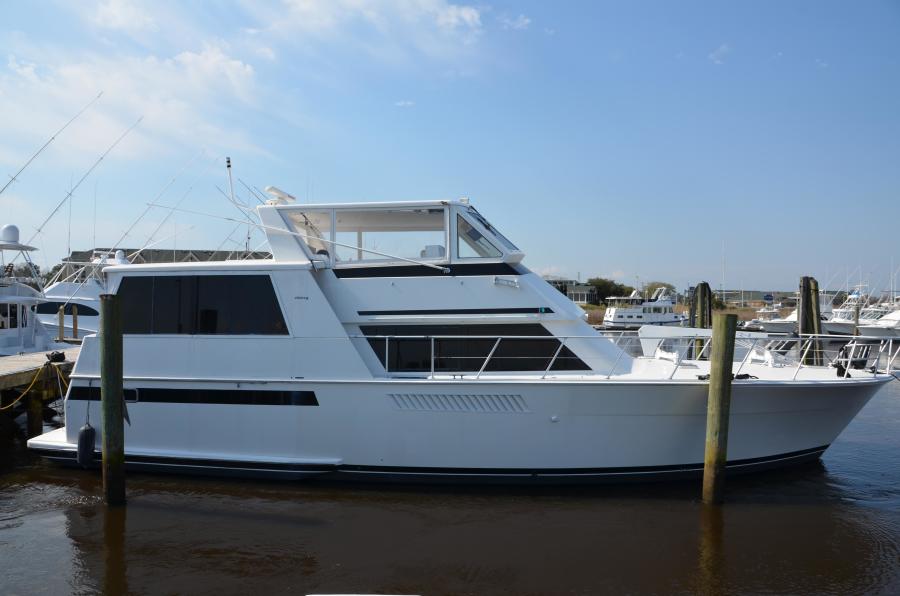 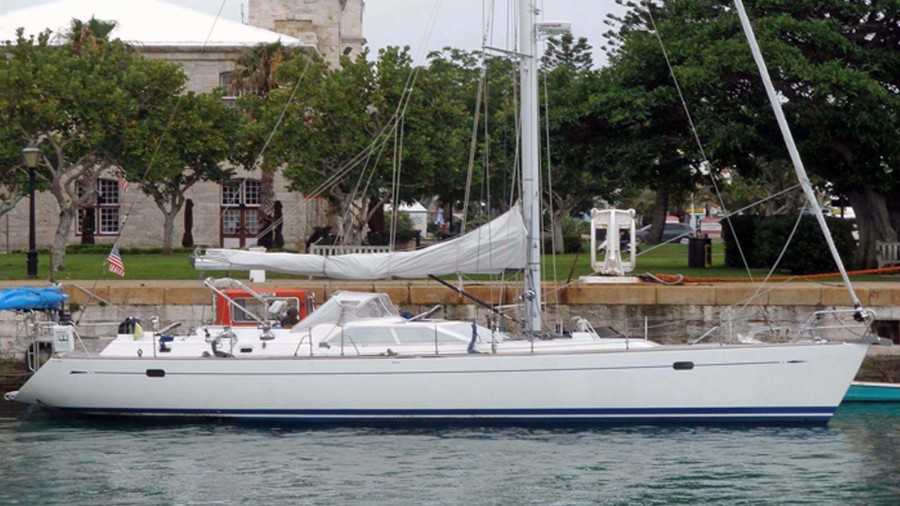 In the early 1900s, lumber mogul Burroughs and partner Collins saw an opportunity to develop the beach as a seaside resort and named it Myrtle Beach for the native wax myrtle growing along the shore. Development expanded in the 1920s with the upscale resort, Arcady & Pine Lakes International Country Club—the first golf club! Sports Illustrated was founded at that time in Myrtle Beach and the Ocean Forest Hotel, one of the first grand beachfront hotels opened in 1930, but the textile magnate who developed it sustained heavy losses in the stock market crash and had to give it up. The hotel fell into disrepair after WW II was demolished in 1974 to make way for residential condos, Ocean Forest Villas. During the 1930s – 1940s, the Atlantic Intercoastal Waterway opened in 1936 to pleasure boat and commercial shipping traffic, and an Air Force base was established in Myrtle Beach for training coastal pilots during WWII.

Myrtle Beach Pavilion was built in 1949 and the nickname “The Grand Strand” was coined in 1949 by the Myrtle Beach News which titled an article with the name and it stuck. Myrtle Beach became a city in 1957. The 1960s saw a golf boom in the US, and during the rebuild from hurricane Hazel’s destruction of Myrtle Beach, new golf courses were built on an annual basis, with over 100 in Myrtle Beach area today! The development of attractions, shopping, homes and other amenities brought waves of visitors and an influx of permanent residents to Myrtle Beach each year. Today over 14 million visitors are welcomed to The Grand Strand each year!

The 60-mile Grand Strand on the Atlantic Ocean offers many options for recreational sailing and boating from Little River (to the north) down to the historic Port of Georgetown (to the south) and the towns/beaches in between, including Myrtle Beach. Visitors can take a casino cruise, charter a Caribbean-style sailing ship, and excursions are available to explore Bird Island, lowcountry ecotours, watch dolphin pods and sea turtles, or enjoy sunset skyline views of the Myrtle Beach area. With so much surrounding water, fishing offshore or inshore, saltwater or fresh can be enjoyed by the recreational sportfish enthusiast. Watersport concessions offer jet skis (PWCs), kayaks, banana boats, SUPs (paddleboards) and more for rental. Visitors can enjoy waterparks and live family entertainment—shows, dance, comedy, concerts, movies, dinner theater.

For the golfer, there are at least 100 championship courses designed by legends like Arnold Palmer, Greg Norman, Robert Trent Jones and others. Nine golf courses in Myrtle Beach area were selected by Golf Digest as “Top 100 Public Courses in America” and the “Best You Can Play” in South Carolina by Golfweek. For shopaholics there is a fabulous array of options—upscale retailers and boutiques, outdoor shopping complexes and two outlet shopping malls. The Common Market, developed in 2008 on the former Myrtle Beach Air Force Base that closed in 1993, includes historical markers informing visitors of the air force base history and its heroes. A shopaholics dream, “Uptown Downtown” features popular specialty stores and boutiques offering top brands, interspersed with restaurants, entertainment and more, seasonal outdoor events and residential opportunities.

Iconic modern landmark, SkyWheel Myrtle Beach soars 200’ above the oceanfront boardwalk for a birds-eye view of the Atlantic and Myrtle Beach skyline. When it opened in 2011, the observation wheel with climate controlled enclosed gondolas, was the first of its kind in the US and is the centerpiece of the Boardwalk. The Myrtle Beach Boardwalk & Promenade built in 2010 along 1.2 miles of oceanfront, features loads of shops, restaurants, hotels, amusements, rides, attractions and entertainment. The Boardwalk is known as the heart of Myrtle Beach. Broadway at the Beach is another shopping center and entertainment complex, owned and operated by Burroughs (same family that developed the first Myrtle Beach resort) & Chapin. Named “South Carolina’s favorite travel destination” and Myrtle Beach’s “most popular place to eat, shop, enjoy live entertainment and nightlife,” Broadway at the Beach is set on 350 acres in the heart of Myrtle Beach with nightclubs and hotels surrounding the 23-acre Lake Broadway. It includes 3 theaters, 100+ specialty shops and 20+ restaurants.

Some popular annual festivals and events are the Little River Blue Crab Festival that draws 50,000 to the small fishing village just north of Myrtle Beach, Carolina Country Music Fest at Myrtle Beach Boardwalk (June 2021), Myrtle Beach International Film Festival at the Common Market, plus many other cultural and seasonal events, such as A Grand Strand Holiday at Christmastime.

For those visiting by boat, there are many excellent marinas in the area. Check dockwa.com or SnagASlip.com for a more complete list, details and to make reservations. Here are a few marinas that offer transient dockage.
Marina at Grande Dunes offers protected harborage for vessels up to 120+ feet. If features 126 wet slips and 1200 linear feet of lay-along floating docks. The full-service marina is open to the public with fuel, maintenance, marine store, facilities. Amenities include pump-out, water, power, dock carts, wi-fi and more. The marina is the trailhead for future scenic walkways along the AICW (Atlantic Intracoastal Waterway).
Harbourgate Marina Club, “Voted Best Marina of the Grand Strand,” is a premier marina that underwent major improvements in the past few years. It features 100 wet slips on 3 floating wood docks, fuel dock, ships store, facilities and onsite Filet’s Steak, Seafood, Sushi Restaurant and Tiki Bar. Slips range from 37’ to 50’ and one 82’ T-head dock with 8’-10’ draft throughout. A 200’ face dock is available for fueling and mega yachts. Transients are welcome for overnight and extended stays. Amenities include power, water, cable TV, wi-fi and more.
Osprey Marina LLC is located on a protected harbor 150 yards off AICW at MM 373. The marina features a fuel dock able to accommodate a 90’ vessel, 9’ dockside depth, 128 wet slips with power and water, facilities, Internet, pump-out, ship’s store, and is at 90% capacity year-round.
Barefoot Marina in North Myrtle Beach offers 1100’ of floating concrete docks available for transients. Maximum LOA 150’ x Beam 30’ x Depth 8’. Resort marina services, including fuel, pump-out, water, electric, wi-fi, cable TV, facilities, pool. Restaurant is in walking distance. (dockwa.com)
Myrtle Beach Yacht Club is located on the scenic and protected waters of Coquina Harbor in Little River on the AICW at MM 346. The marina offers easy access to the Atlantic Ocean via the Little River Inlet—with no bridges. Beaches, the Grand Strand, golf courses and world class fishing are just minutes away. The marina features 153 floating docks with slips in 38’, 46’, 55’ and 65’ lengths and 7.5’ depth. Amenities include cable TV, wi-fi, fuel dock, pump-out, power, facilities, onsite restaurant and a 2.5-mile boardwalk.