Front Runner Boatworks are an exciting new center-console line built by boaters, for boaters. Owners Mark Lacovara and Phil Mahn are long-time center-console owners and builders who decided that designing boats the way they wanted them designed also appealed to a lot of other people in the market looking for a similar product. Front Runner Boats feature a big bow flair, stepped-bottom hull, and the best materials a for stellar performance that can be thoroughly customized to fit your needs. Front Runner currently has a 39' center-console built and are currently working on a 36' and a 47'. 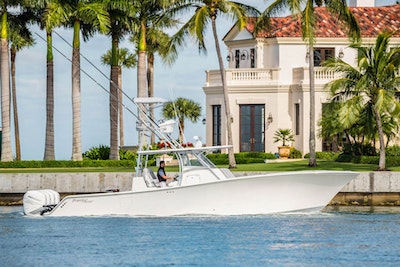 The story behind Front Runner Boatworks is truly an American success story based on ingenuity, experience, and passion for being on the water. Front Runner founders Mark Lacovara and Phil Mahn partnered in a boat almost a decade ago, fixed it up how they wanted, and ended up making a bit of money when they sold it. The duo eventually started a re-powering and re-wiring business that grew into a full-fledged service center in northern Florida. With continuing success, Mark and Phil realized that they had the ability and the will to create a new breed of center-console that could successfully compete in quality with other top manufacturers.

“It got to the point where we were doing everything but the fiberglass, so we thought, ‘why not just build boats,’” said Lacovara in an interview with Trade Only Today. The Front Runner 39 was the first model to debut at the 2019 Fort Lauderdale Boat Show with a tremendous amount of excitement and interest.

Even more astonishing, there are no big corporate investors, no loans to pay back, and no one above them telling them what shortcuts to take to meet a profit goal. They are simply left alone to build center-consoles the they want to build them. "We can build it better," is a line that is commonly heard when talking to the team.

Each Front Runner model is designed by Erwin Gerards, a highly-regarded naval architect who has worked on major custom sportfish brands like Rybovich, Gamefisherman, Garlington, and others.

As of late 2019, eight of the 39 center-console have been sold, as well as seven of the 36' models. The team is anxiously awaiting the engineering of the 47, which in today's big center-console market, should also do quite well.

"The wiring, rigging, fit and finish is on par with the custom builders," said Lacovara, adding: “We couldn’t just be cheaper, we had to be cheaper and as nice or better in every aspect of the build.” The Front Runner 39 when outfitted with quad 350HP engines will start around $439,000 which includes the running boat, console, hardtop, with a sink and bed down below. The only thing to add at this point is the electronics which can be customized to your preferred brand and equipment.

If you're interested to learn more about Front Runner Boatworks, please contact United Yacht Sales broker Mordy Miltz at (516) 606-1282. Mordy is the nationwide sales representative for Front Runner and is experienced in the center-console market.