Power Catamarans, or "Power Cats" as they are often referred to, are one of the fastest growing segments in the marine industry. Sailing Catamarans have long been the preferred choice of sailors in the Caribbean because of the advantages of having two hulls and a wide beam. For a family enjoying a catamaran experience though, sailing becomes more of a hassle for some. For this reason, many of the yacht charter destinations now offer just as many power cats as sailing cats in their selection. This progression of how the catamarans are used spurred many of the catamaran manufacturers to start producing more power cats. 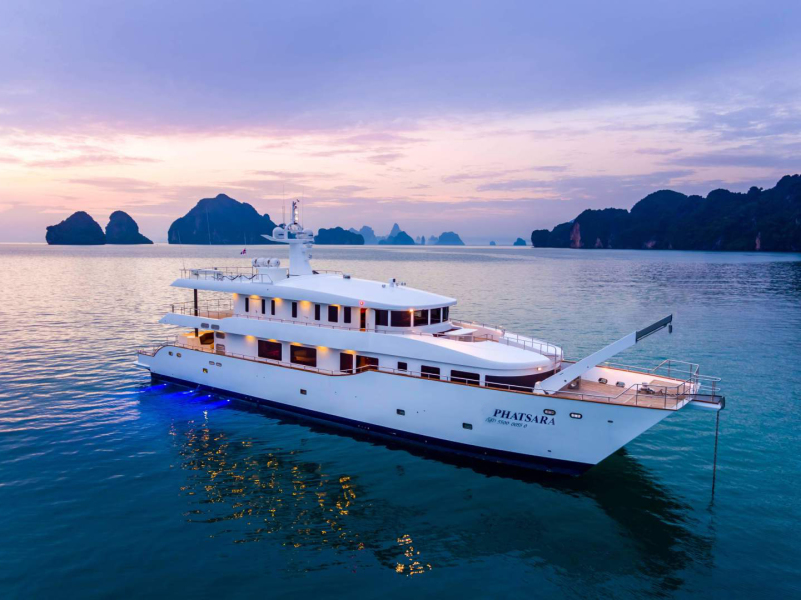 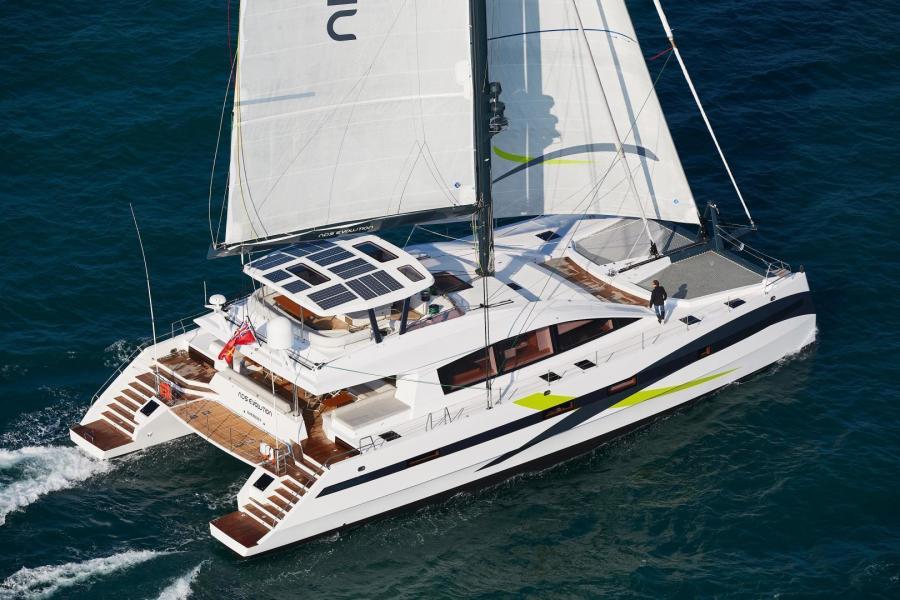 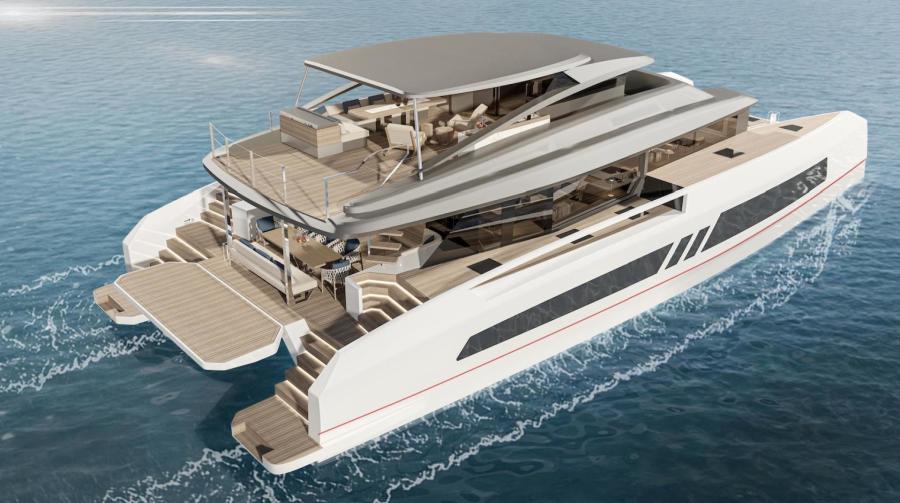 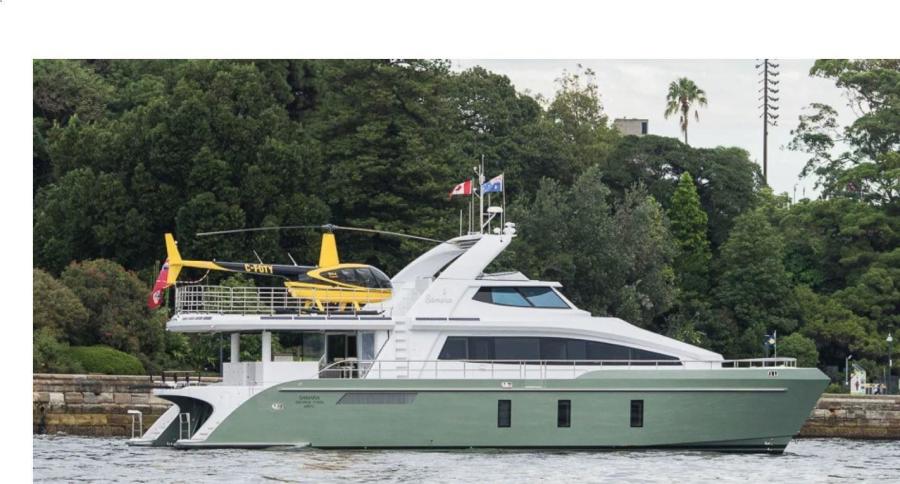 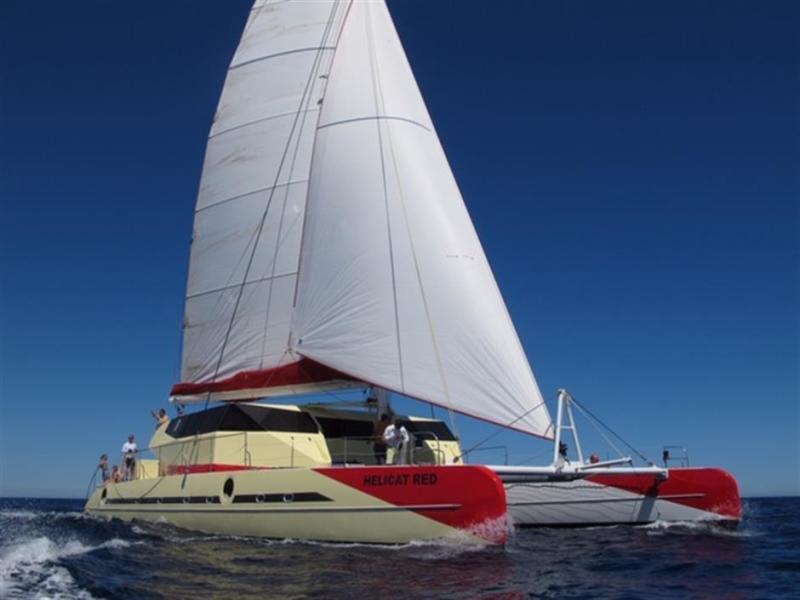 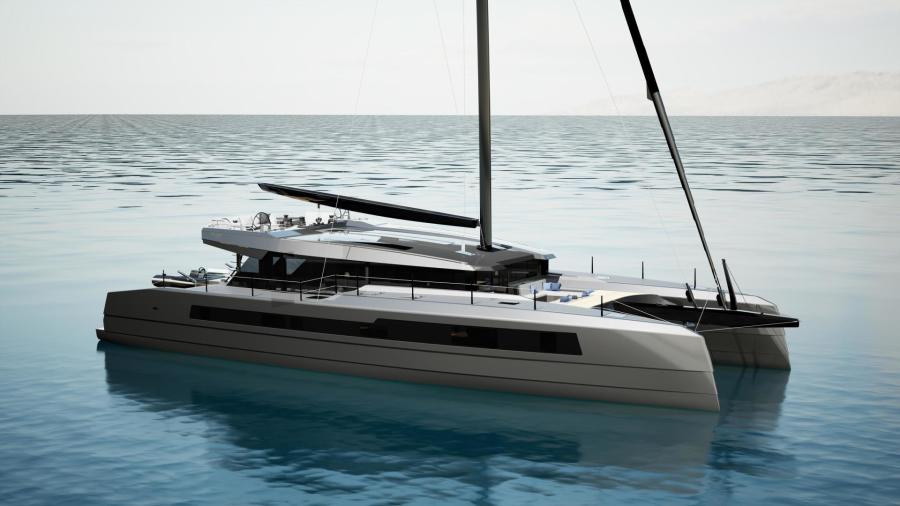 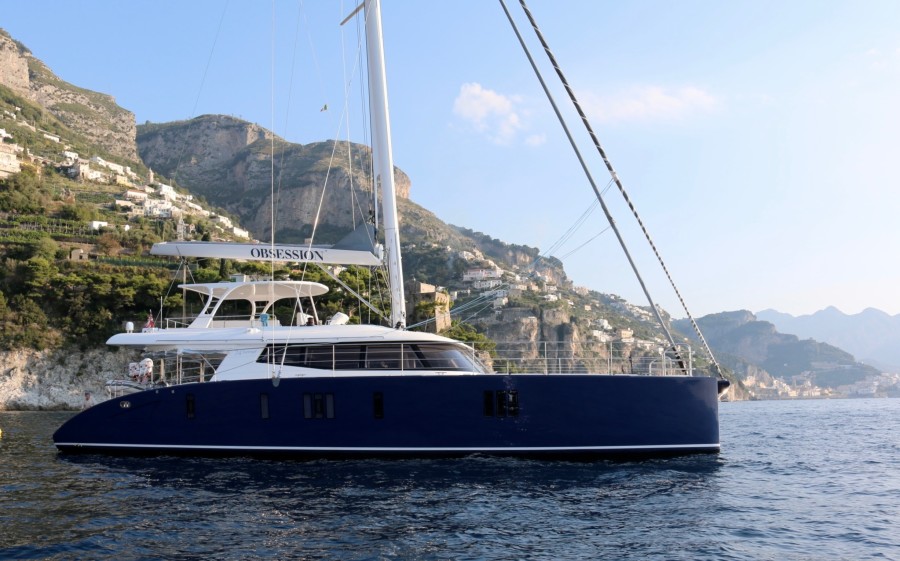 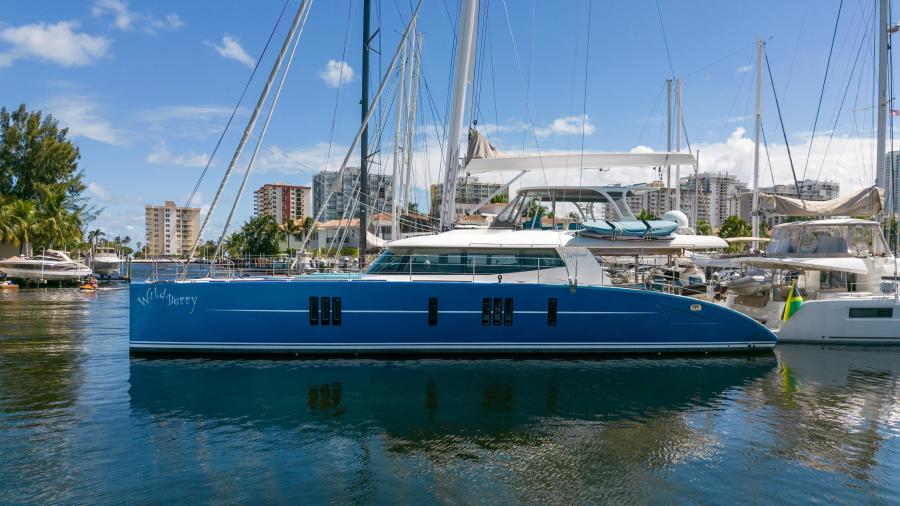 When we hear someone has the bug for a power catamaran, it’s a gleaming opportunity for us to elaborate on their wonderful advantages. Different from the benefits of sailing, of course, there’s lots to entice a buyer with from expanded living areas, stability, storage capabilities, and fuel efficiency.

Far from being known as a new trend, the catamaran design has been around since 5th Century India. Sailing catamarans have been a popular choice for cruisers for years, but adding full power to it has really become popular in the last decade.

Below are some of the most well-known power catamaran brands on the market today:

Here are some frequently asked questions regarding buying a power catamaran

What is a power catamaran? 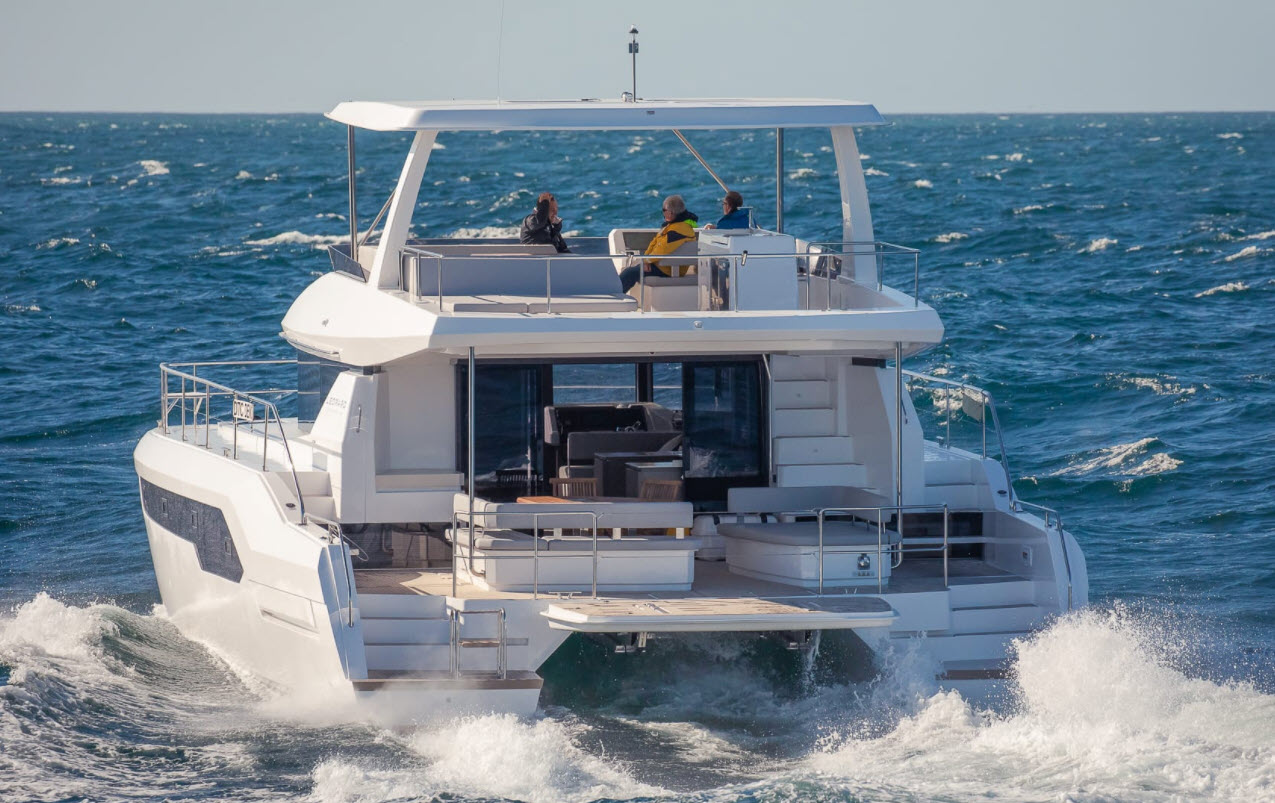 Who invented the catamaran boat?

Catamarans originated with Polynesian people who built catamarans and outrigger canoes to travel to distant islands of the Pacific and Indian Oceans and by fishermen in Tamil Nardu, India for their stability in various sea conditions. Western development of a catamaran vessel began in the mid 1600s, to allow faster sailing in shallower waters and lighter wind, but didn’t meet with commercial success, and it wasn’t until the 1800s that further development led to the filing of a US Patent. Power catamarans were developed in the early 20th century as submarine salvage vessels and high-speed military transport vessels. The more recent development of the recreational power catamaran combined the best features of a motor yacht - luxurious living and deck area with the stability, speed, and efficiencies of a catamaran. One of the most popular examples is the 43ft Lagoon. 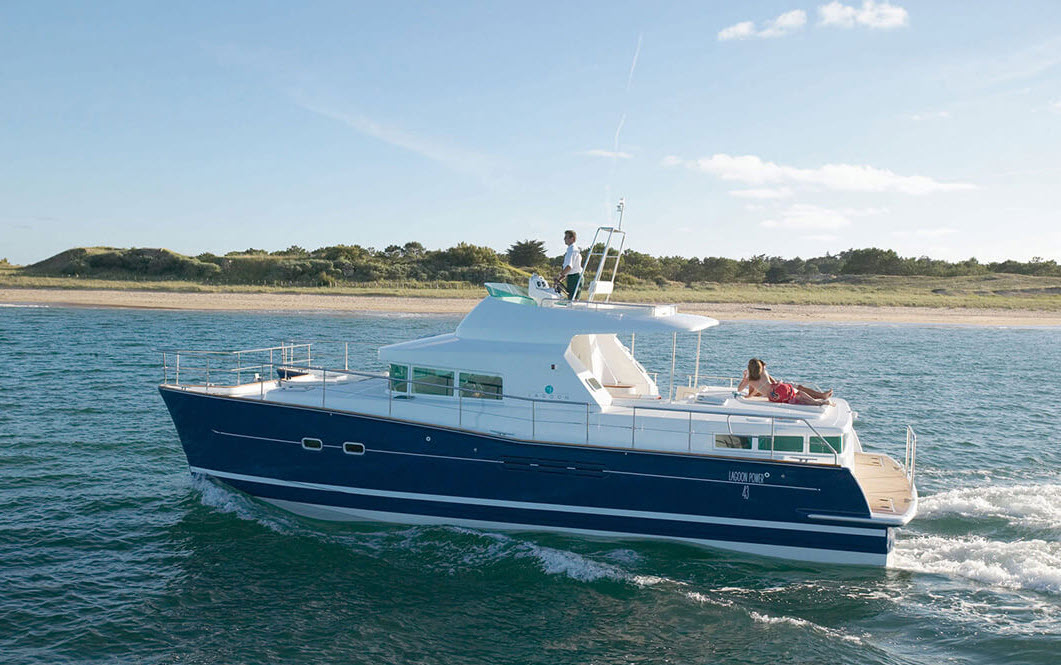 What are some types of catamarans?

What is the difference between conventional, wave-piercing, and SWATH catamaran hulls?

Traditional catamaran hulls are more banana-shaped, designed to ride on top of waves, with the geometry of the vessel creating stability, whereas the wave-piercing hulls extend forward and are reversed—longer at bottom than top/bow and sharper, allowing them to slice through waves for greater speed and less pitching, due to their lower buoyancy. More racing catamarans are built with wave-piercing hull technologies for speed advantages. Cruising catamarans in the superyacht category are utilizing wave-piercing hulls for the smoothness and performance advantages. Large passenger ferries and military catamaran ships utilize this type of hull for its speed and smooth ride through waves; the bridge deck may be configured like a regular v-hull, allowing it to penetrate wave crests. The SWATH (small water-plane area twin hull) catamarans employ tubular, submarine-like hulls that are completely submerged and connected by pylons to the bridge deck using a small cross section at the waterline. This type of hull was invented in the mid-1930s and is used for large research vessels and military craft for running in heavy seas as displacement volume is completely below waterline. This enables the ship to resist pitch and heaving, as there is no possibility of hull planing. Today’s builders of cruising power catamarans utilize the best hull technologies for increased efficiencies and safety.

Is a pontoon boat a type of catamaran?

Depending on boat size, pontoon boats ride on 2 or 3 aluminum flotation tubes called pontoons, that support and are covered by the open deck, and are not accessible from the deck; they serve to float the boat. A railing with fence paneling or seating upholstery runs along the deck perimeter, and they are typically outfitted for lounging and entertaining (nicknamed “party barges”), though many today are luxurious, and as speedy as runabouts and used for watersports. There are two types of pontoons: recreational and houseboats. Catamarans differ greatly in that the main deck rests on 2 or 3 (trimaran) hulls that are accessible living and/or storage space, and catamarans can be built with a flybridge deck. The catamaran hull is built for cruising/running offshore and inshore waterways, whereas the pontoon boats are open deck boats primarily designed for lakes, bays, rivers that are quieter waters. Catamarans tend to be wider and larger than pontoon boats, but each is a distinct category with its own purpose and market. Pontoons tend to serve the entry-level family recreational market. Both have seen an increase in popularity in the recreational boating industry.

Catamarans offer more deck and interior space per foot than monohulls, meaning a 40ft powercat can have as much space (in and out) as a 50ft monohull powerboat. Even a smaller powercat can have easily accessed 3-4 cabins with opening ports in hull windows for ventilation and light, plus the greater privacy of separate hull space, an ideal feature for charters. Inherently, the wide-apart hull configuration provides a more stable platform while underway or to stay level at anchor, unlike a monohull that can roll. Having twin engines and propellers set wide apart allows catamarans greater maneuverability and a shallower draft for island cruising—some catamarans can be beached! Having two hulls creates inherent redundancy with engines, props, water pumps, and extra space for additional equipment like generators, watermakers, and more. Catamarans with wave-piercing hulls have even greater efficiencies.

(Seen below: The living areas on a catamaran offer great space inside and out.)

Of course, there are some disadvantages, as with any category of vessel. One drawback is the cost to store and maintain a catamaran is higher, as marina dockage isn’t always accommodating of the catamaran’s greater beam and with two hulls/engines, maintenance and detailing costs may double. Haul-out costs are higher as well. The preference of one type of boat over another is completely personal; which best meets your priorities and usage plans? Do a cost benefit analysis—does the boat’s features and benefits outweigh any drawbacks?

What are the most popular current brands of cruising power catamarans?

What are the best power catamarans for offshore cruising?

According to the Oct 2020 issue of Passagemaker magazine, the Nautitech 47 power catamaran features load-carrying semi-displacement hulls give the Nautitech 47 a distinct performance advantage for bluewater (ocean) cruising. Other recommended models are the new Leen 56 trimaran long range cruiser designed for Transatlantic voyages. The main diesel engine is in the center hull and electric drives are in the two outer hulls (called amas). The Leopard 53 Powercat can be run from the lower helm with excellent visibility in air-conditioned comfort and features 6’8” and 6’10” headroom! Bali Catspace Motor Yacht (Catana Group) is nearly 39ft of luxurious outside/inside living space. Utilizing the latest innovations, the shape of her hulls and integral deck gives this power catamaran excellent seakeeping qualities. The 60 Sunreef Power is a versatile, modern motoryacht in Sunreef Yachts’ sporty Power line-up of catamarans in 60, 70, 80, and 100ft lengths. These are just a few examples. Fountaine-Pajot has been building catamarans since 1976; latest models are as luxurious and seaworthy as any world-class power motoryacht, with catamaran advantages.

Lagoon, Fountaine-Pajot, Sunreef, Leopard, Horizon, and other power catamarans are extremely popular for island charter cruises as they offer the power catamaran advantages of stability, speed, efficiency, spaciousness (wide beam interiors, private staterooms below deck), and relaxation with lots of deck space and 360-degree panoramic views! With their shallower draft, the swift powercats are great for island hopping in the Bahamas or BVI, and elsewhere in the world with beautiful archipelagos, reefs, and pretty islands to explore!

Read These Other Articles Related To Power Catamarans: