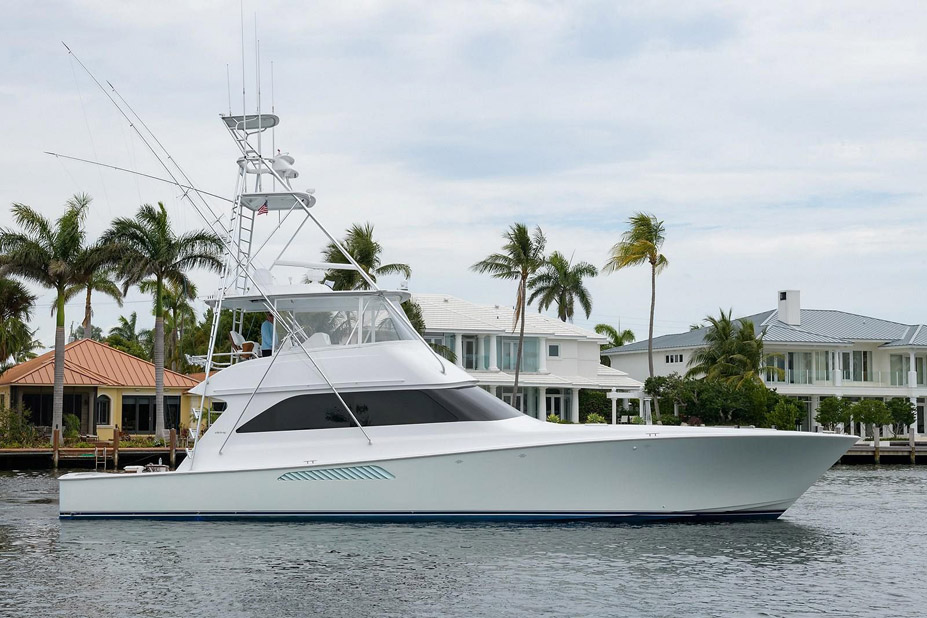 The Viking 61 Convertible introduced in 2001 represents decades of Viking’s state-of-the-art engineering, performance, and luxury. Like other Viking Convertibles of the new millennium, the 61C is built on the tremendous success of the Viking 55 Convertible (1998-2003). The 61C’s hull is fully cored, as are the Viking 65 and 72 Convertibles that preceded her. Though the 61 Convertible shares a resemblance to and features of other Viking Convertibles, she is her own boat. Designed with a deeper, sharper entry, and refined chine angles, the 61C offers a dryer ride and better head sea performance. Propeller pockets were introduced in 2003 to reduce the draft. The 61C’s styling continues the trend to rounded edges and curves for a powerful, sleek look. Low slung deck house and bridge, and long gently curving sheerline amplify the beautiful lines and agile look of the 61 Convertible.

Viking’s outstanding engineering is especially evident in the meticulous, gleaming white engine room with standing headroom and space to maintain and service all of the well-arranged mechanical equipment and auxiliary systems. The air-conditioning compressors are in a separate pump room forward of engines which acts as a sound buffer between the engine room and master stateroom. Engines are mounted on steel I-beams set in special bulkheads to evenly distribute weight (center of gravity) and minimize vibration and sound transmission throughout the vessel’s living areas. The engine room is accessed via centerline section of forward cockpit console.

The 170 sq ft cockpit is arranged for tournament fishing with a full array of gear and amenities that are neatly stowed in compartments in deck or built into the cockpit’s molded-in console along the main cabin bulkhead. The console with preparation center, tackle storage (starboard side), bait freezer, and refrigerated step box, was standard until 2005 when the optional raised observation mezzanine became standard for the 61C. Other cockpit amenities include flush mounted rod holders, a large insulated in-deck fishbox, two storage boxes with the option to convert one into a livewell, walk-through transom door with lift gate, and Glendinning Cablemaster connections, gaff storage, and washdown connections hidden under gunwale. Nothing is laying around to clutter or obstruct in the “business end” of the boat. A built-in mounting plate in cockpit sole could support an optional pedestal mounted full-size fighting chair, rocket launcher rod holder array, or table. Owners could customize the cockpit to their liking, making the Viking 61 Convertible a semi-custom sportfishing yacht.

The 61C’s open flybridge with hardtop is accessed via a sturdy aluminum athwartship bridge ladder from cockpit mezzanine. Viking also offered an enclosed bridge version of the 61 Convertible with an optional spiral stairway to the salon below. The open flybridge features a huge peninsula style bridge console extending from portside with starboard walkaround to the forward and starboard guest seating. The helm console could easily accommodate an array of electronics displays, instruments and storage. Display screens are protected from the elements under clear acrylic covers. Viking offered an optional Palm Beach style helm pod control station with single lever controls flanked by top-opening compartments with electrical switches and other electronics. Viking added a plexiglass notch in the flybridge front for greater foredeck visibility from helm. Visibility all around is excellent. An optional Isinglass enclosure offered weather protection on the open bridge. The console features a large built-in chill box and could accommodate an optional top loading freezer for convenient access to refreshments (or bait storage) on the bridge. Wraparound guest seating is forward and portside of helm console and a long bench seat is on starboard side—both have storage underneath. Owners could have a custom tower installed, along with compartments under the hardtop for additional electronics and electric teaser reels.

The Viking 61 Convertible offers the versatility of a luxurious, comfortable family cruising yacht as well as a competitive tournament fishing boat. The Viking Yacht interiors are well known for beautiful high gloss (or satin) finished hand laid teak or walnut joinery and designer décor and furnishings that are elegantly traditional. The main cabin with open salon, galley, and dinette is accessed by an electronic sliding door from cockpit steps. The standard arrangement features a U-shaped sectional couch with cocktail table to port. There is storage beneath the seat sections for extra rods and gear. Some customized versions of the 61C feature an L-shaped couch to allow two bar stools at an overhang on the end of the galley’s peninsula counter. Directly across from the couch is the built-in credenza with entertainment system and storage. The dinette is forward on starboard side, flowing seamlessly from the credenza. The flatscreen TV is mounted on the bulkhead above the dinette for easy viewing throughout the salon. U-shaped open galley is across on portside. Undercounter refrigerator and freezer drawer units and concealed appliances create an uncluttered, open ambiance unifying the main salon area.

The standard accommodations plan is a 3-stateroom, 3-head arrangement with an athwartship queen berth in portside master stateroom and ensuite head. Forward guest stateroom has over/under berths with double lower on portside and single upper on starboard. An optional centerline queen berth was available. The third stateroom features upper and lower bunks. Each has an ensuite head with shower stall and plenty of storage in cabinets and hanging lockers. The optional 4-stateroom plan has a fore and aft queen berth in master and two port staterooms with upper/lower bunks that share the guest/day head. A laundry center with stacked washer and dryer is on starboard side at bottom of companionway stairs.

Viking’s superb quality of build and style is reflected in the creative use of space and materials and attention to detail from bow to stern. Everything needed for an extended cruise to the islands or distant fishing spot is provided.