The Versatile Gulfstream 52 Is The Best Of Both Worlds

Gulfstream Yachts isn't shy about their motto, "If you can dream it, we can build it." Looking at the design of the new Gulfstream 52, with its unique, climate-controlled center enclosure, it's clear that your dream easily can become a reality. The hybrid yacht is stunningly aggressive in appearance, almost military-like, which is sure to excite owners who want to turn heads at the marina. The most glaring characteristic of the 52, however, is the addition of the enclosure in place of what is normally an open air center-console.

"Gulfstream is a boat for those anglers or cruisers that want something different than the average center-console," said Paul MacCormack, Gulfstream Brand Manager for United Yacht Sales. "Instead of adding another row of seats, Gulfstream has created a new concept for the boater that wants the benefits of a sportfishing yacht with the speed and maneuverability of a center-console yacht. We've had interest from northern boaters who want to extend their season as well as Florida-based owners that want a nice air-conditioned enclosure in the late Summer."

Built to the absolute highest quality, the performance of the 52 is unquestionably superior and must be experienced to truly appreciate. Every Gulfstream model comes in different colors and the 52 has been built in white, red, and grey, although it can be customized to your tastes. For more information on the Gulfstream 52, to talk about designing your own dream, or to find out about availability, please give Paul a call at (772) 812-1182 or by email at PaulM@UnitedYacht.com.

(Seen below: The Gulfstream 52 in black is featured in the official commercial.)

What are the benefits of the enclosure on the Gulfstream 52?

The air-conditioned/heated enclosure offers a comfortable area to drive the boat, along with a salon-like atmosphere for dining inside, or enjoying the views with friends while at cruise. It also provides a dry and pleasant area to run full speed to the fishing grounds in a tournament. A U-shaped leather couch is large enough to easily sit 6 guests around a pedastal table with drink holders. The table also retracts and can create a nice size bed with the cushions placed over it. The large windows allow for excellent visibility.

In an interview with Power & Motor Yacht Magazine, Gulfstream founder Hunt James described his vision to "remedy the flaws he found on other center-consoles" by building a boat just for himself. With a passion for fishing and diving, James conveyed that "his wife and guests enjoyed a boat that allowed them to be active by day, but they hated getting wet by passing showers when they were dressed nicely and on their way to dinner in the evening. James wanted a boat that offered room to fish and stay active, but he also wanted protection from the elements at the helm and a comfortable cabin." Both the sliding doors and the back window open to enjoy the outdoors and ventilation.

(Seen below: The salon seating area inside the enclosure of the Gulfstream 52.) 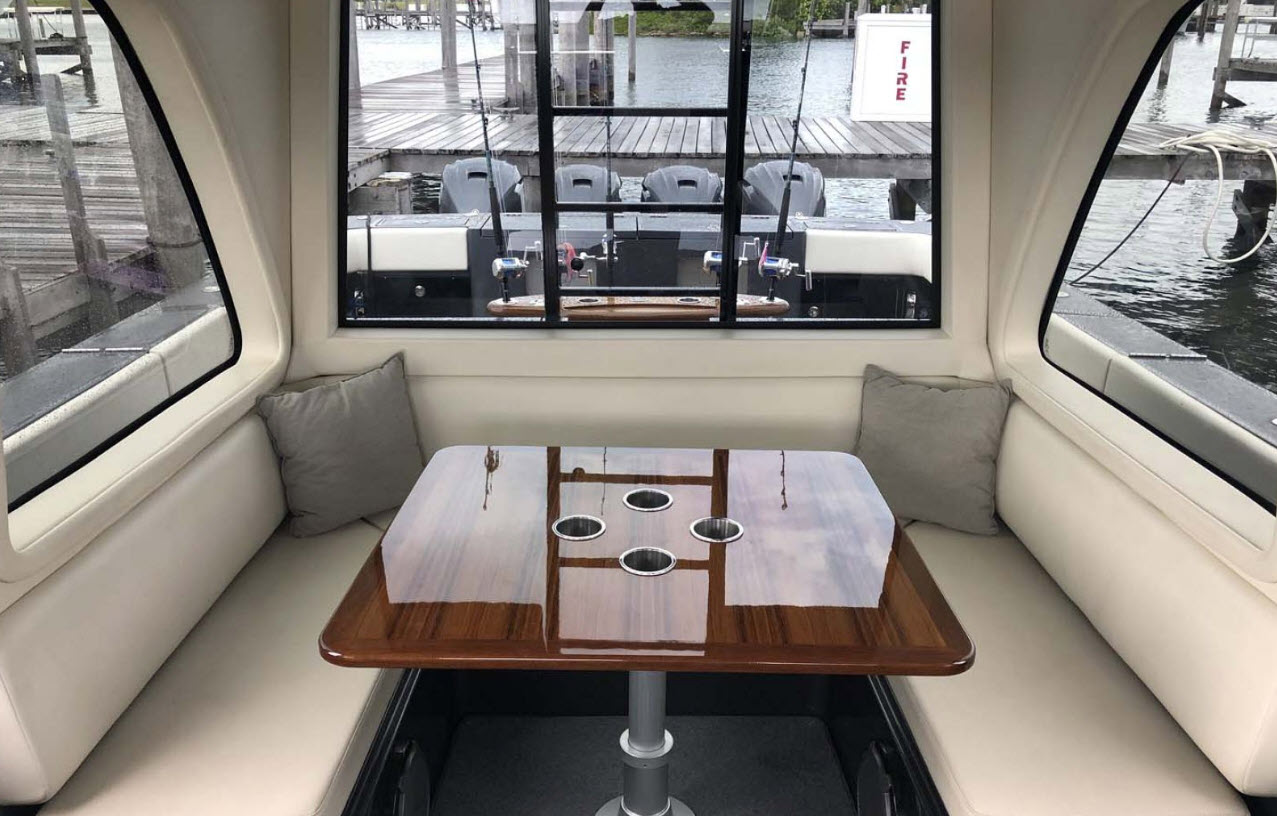 Forward in the enclosure is the helm which feels like you're at the controls of a battleship. In front of the captain are two large screens with an additional display placed on the portside meant to be for the navigator. In between the main controls and the navigational portside display is an opening to the lower deck accommodations. Between its center-console like performance and sportfish-like amenities, being behind the controls of the 52 is indeed a unique experience.

(Seen below: The helm on the Gulfstream 52 offers excellent visibility as well as the comfort of the enclosure.) 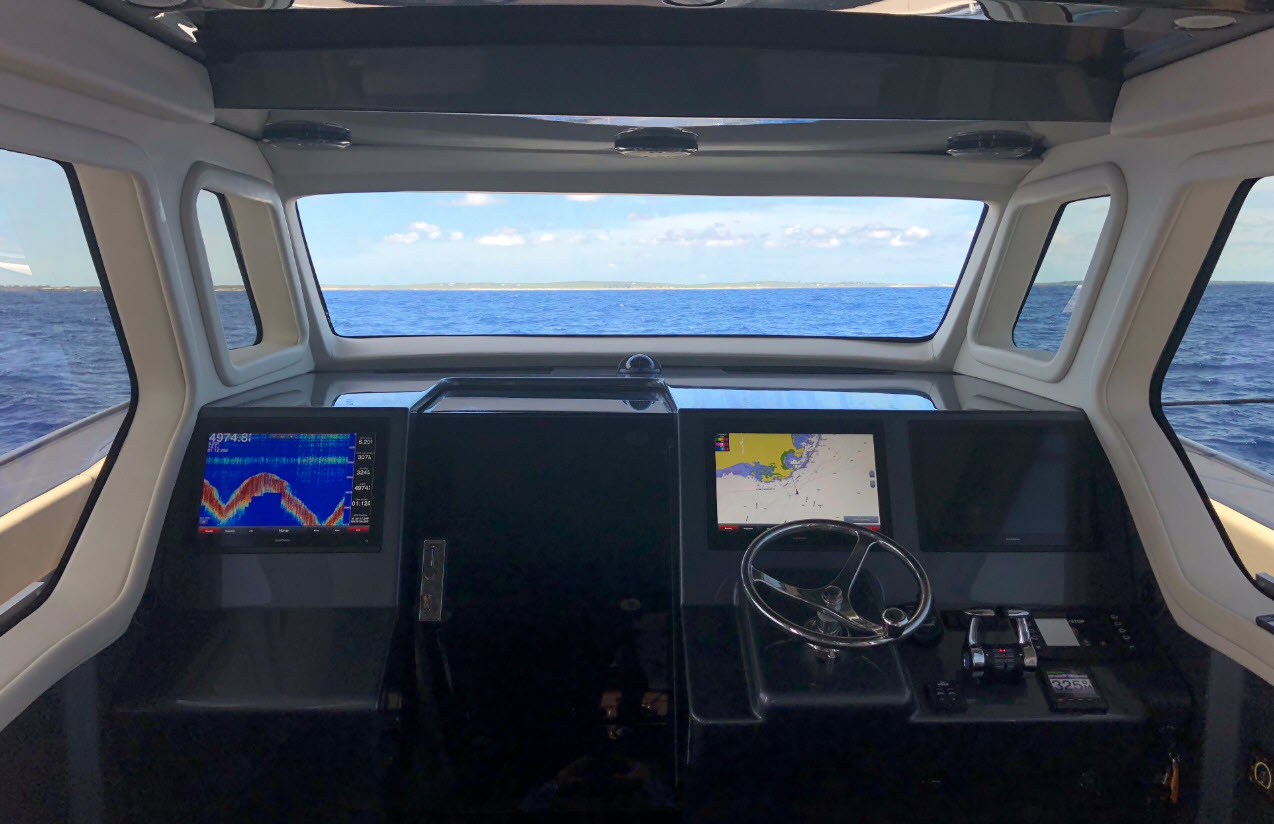 What's The Secret Behind The Top Performance Of The Gulfstream 52?

The look and shape of the Gulfstream 52 is distinctive for many reasons, but you cannot overlook the special design and construction used on the hull. Every hull is foam-filled resulting in a safer, stronger, and more durable hull than similar boats. It also reduces the flex or rattle that is often heard in center-consoles when going through choppy water. Additionally, each Gulfstream Yacht is designed with a Stepped "V" Ventilated Tunnel (SVVT) hull technology which remains the cutting-edge practice in today's high-end yacht builders. The SVVT hull reduces planing time, increases speed, and provides greater fuel efficiency.

(Seen below: The 2020 Gulfstream 52 Tournament Edition is stunningly beautiful and ferociously powerful.) 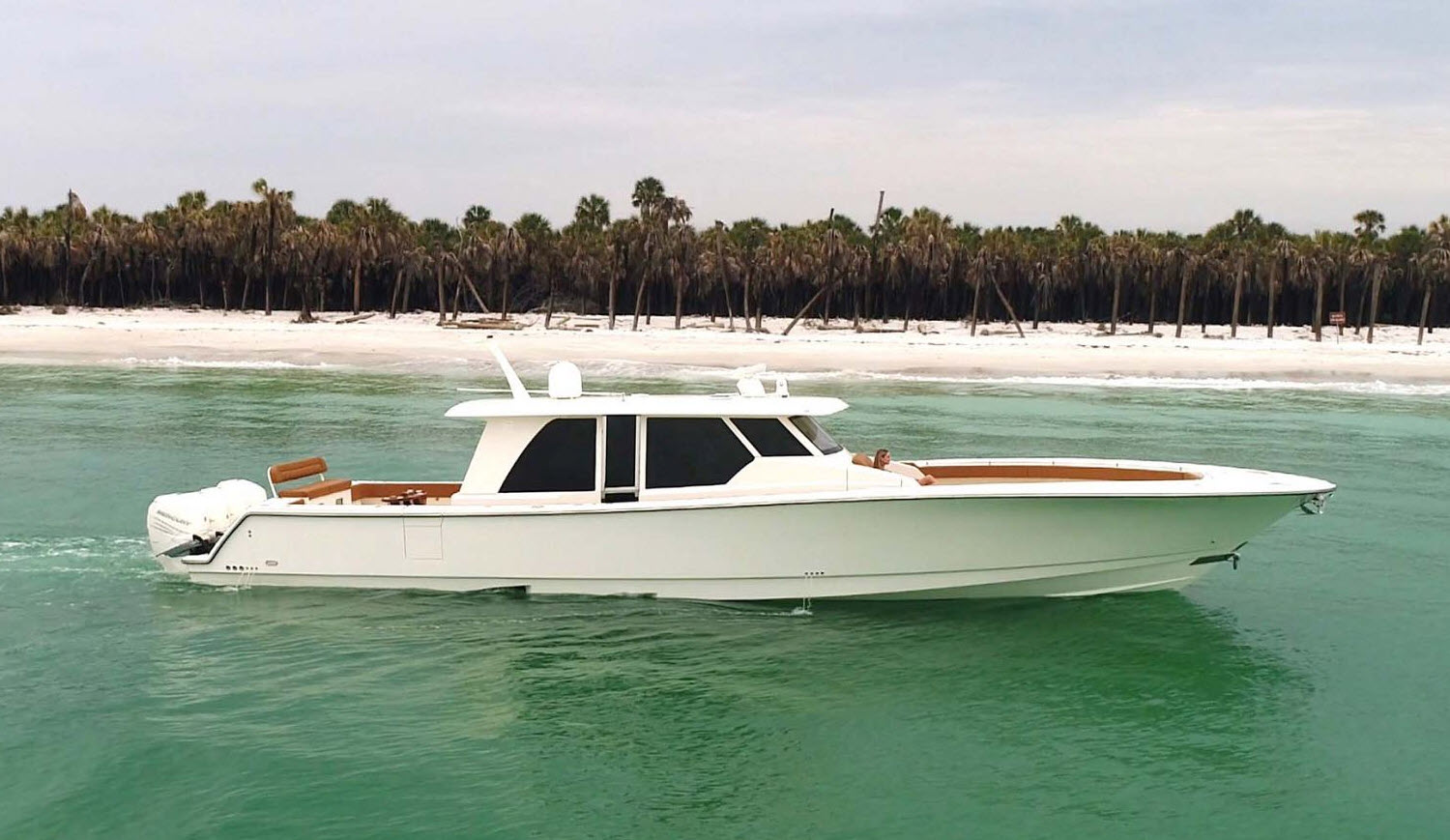 The mastermind behind Gulfstream Yachts is Hunt James, a longtime financial advisor and boating enthusiast that has held numerous positions at the financial firm, Raymond James, that his family started decades ago. James is a serial entrepreneur with multiple other successful companies he's co-founded, along with a number of other philanthropic interests in the community. James' passion for boating, however, has allowed him to embark on a new venture that is driven by his desire to achieve greater performance on the water and better fulfill his lifestyle outside of the board room.

Many boat builders in the industry hire a leading naval architecture firm to help them design their boat to meet today's current demands and keep them at the forefront of boating technology. So what did Hunt and the Gulfstream team do? Not one, but two of the very best yacht designers in the world were hired to create the best performing center-console/sportfishing hybrid yacht possible. Ward Setzer of Setzer Yacht Architects and Michael Peters Yacht Design need no introduction in the world of yachting and were the best possible scenario for Hunt who was elated at the idea of world-renown designers working together on his boat. "You can tell a big difference at 50+ knots on the Gulfstream 52 between the foam-filled construction and the stepped V tunnel hull," continued Paul. This yacht was built in the best possible way imagined with the highest quality materials available and the performance results are really tangible."

(Seen below: The Gulfstream 52 was featured on the tv show Discovering Water on the Discovery Channel.)

What Kind Of Fishing Features Are Found On The 52?

Designed to be versatile for cruising and as a fishing/diving boat, the Gulfstream 52 can be loaded down for the hardcore tournament angler if desired. Being a fisherman himself, Hunt James wanted the ability to troll like a sportfish with all of the same amenities found in a cockpit. One of the obvious advantages is that anglers have the opportunity to fish from a fighting chair in the cockpit, from the deck on the open bow, or from the sides in the deep freeboard.

The Gulfstream is loaded down with fishing features including 5 fish-boxes, 2 56-gallon live-wells, 4 rod holders, cockpit lights, a magnetic tray for tackle and tools, and the list goes on. There is a Murray SportFishing Pompanette rocket launcher that can also be equipped with either a fighting chair or backrest, along with more rod holders. JL audio speakers line the cockpit for an unbelievable sound system and a dive door is installed for easy boarding. Gulfstream can also add on a tuna tower for the true sportfish experience.

(Seen below: With two live wells and ample rod holders, the Gulfstream 52 can be tailored for the serious angler.) 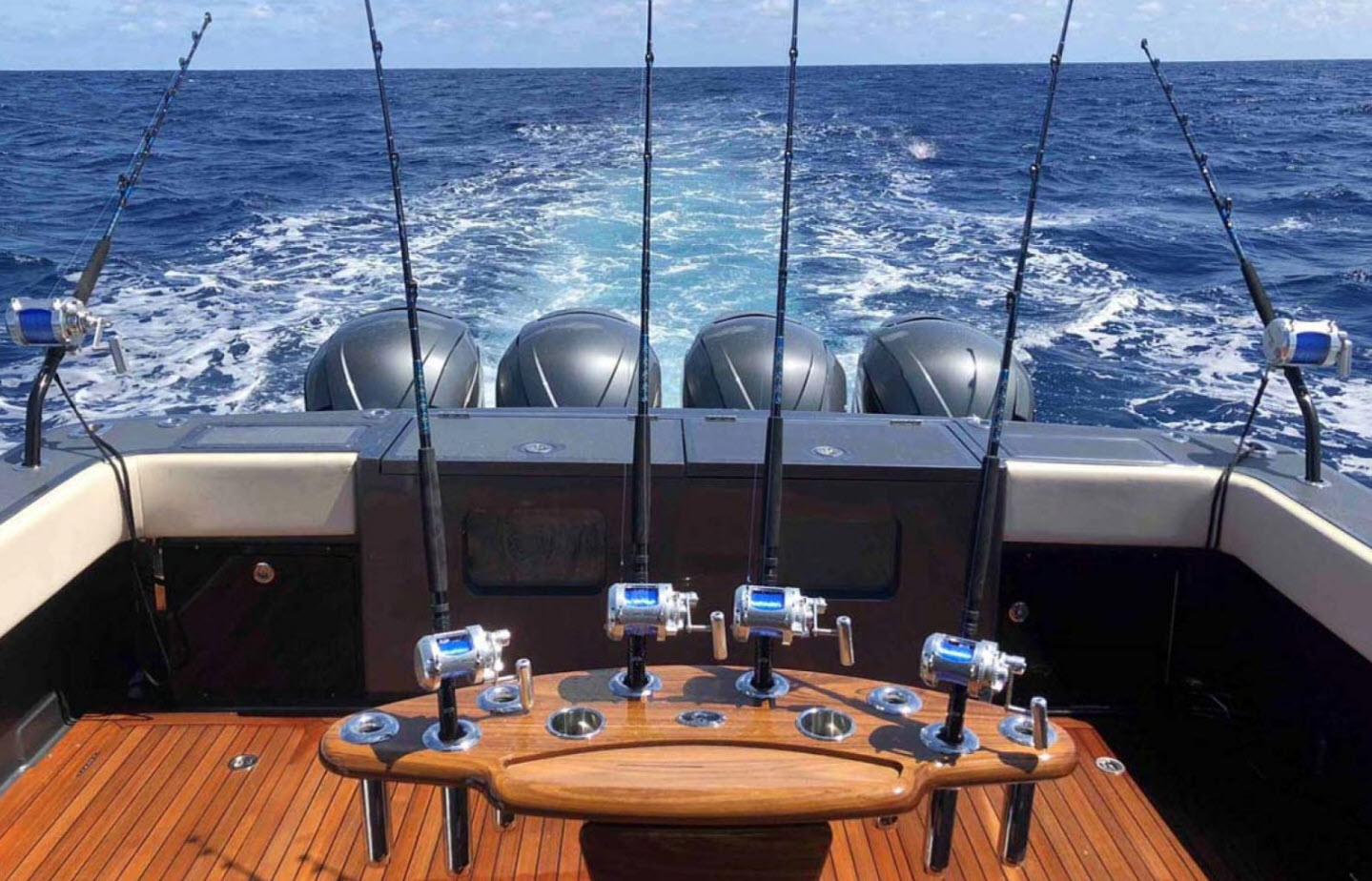 What Overnight Accommodations Are There On Board?

One of the big advantages of a sportfishing yacht is the ability to step out of the elements into the comfort of the air-conditioning, shower, prepare a meal, and rejuvenate overnight for another adventurous day on the water. While the enclosure seating area serves as a salon and can be outfitted with a television, the sliding door near the helm reveals a spacious interior that includes an optional king-sized berth or twin beds. The electrically-actuated table in the salon can also be changed out for a larger table that lowers and provides a queen-sized bed for guests.

With the large windows in the enclosure, guests sleeping overnight on the queen-sized berth want their privacy, particularly if staying at a marine overnight. Gulfstream developed an innovative approach and with a push of a button, all windows except for the windshield turn opaque.

Moving down in the interior accommodations, the amount of headroom is immediately noticeable. With the outdoor galley and grill placed in the cockpit, there isn't need for an additional galley in the cabin although a microwave can be added. There is also an abundance of storage opportunities in the cabin along both sides, in hanging lockers, as well as underneath the berth cushions. There is an entirely separate head, shower, and sink as well. While there isn't enough space for the Gulfstream 52 to be a liveaboard, the accommodations make multiple overnight trips possible and comfortable.

(Seen below: A thorough POV walk-through of the 52 with Hunt James at the Ft. Lauderdale Boat Show. Video Cred: Alfred Montaner.)

How Much Does The Gulfstream 52 Cost And What Is Availability?

The Gulfstream 52 is not your cookie-cutter production center-console and the price reflects the quality construction, high-end electronics, top-performing power options, as well as the multitude of comfort features found on board. Some of the options include a Seakeeper Gyro, up to 3 air-conditioning units, upgraded Kohler generator and much more. While every Gulfstream comes out exceptionally well equipped, the more options you add the greater the price will naturally be. At the lower end, the Gulfstream 52 can cost around $1,850,000. Once you add multiple high-end options like the teak, switchable glass, larger engines,etc. the price can reach just over $2 million.

Currently the demo Gulfstream 52 is available for sale giving potential customers a slightly pre-owned option for less than a brand-new boat. A new 2020 52 is finishing production now and will be available for this summer. For spec/options sheets on both boats and pricing, or to design your own custom Gulfstream Yacht, please contact United Yacht Brand Manager for Gulfstream, Paul MacCormack at (772) 812-1182.

Gulfstream displays at major boat shows around the country. Call for details! 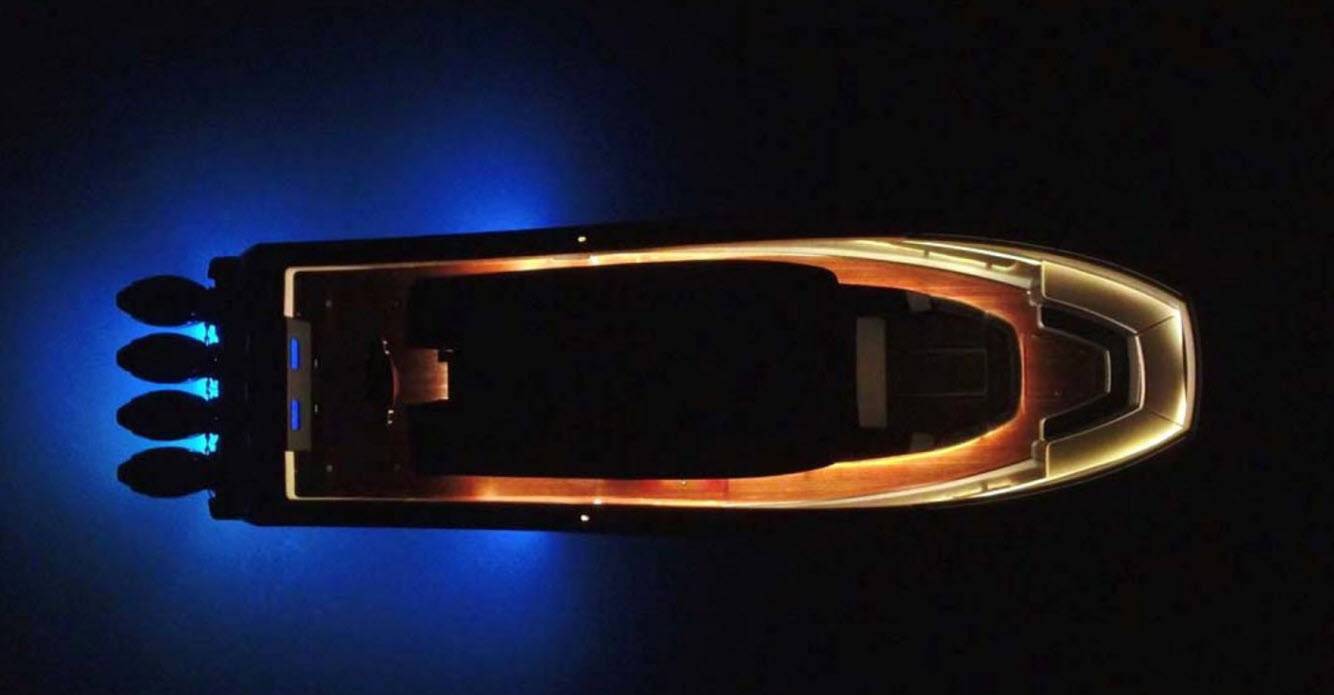 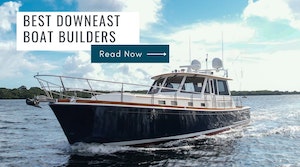 Who Makes Downeast Style Boats And Which Are The Best? 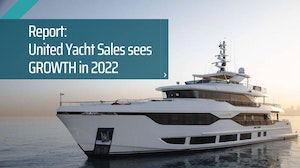 Report: How Many Yachts Were Sold This Year? 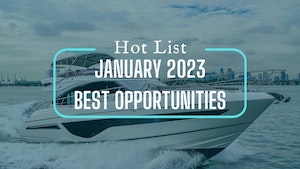 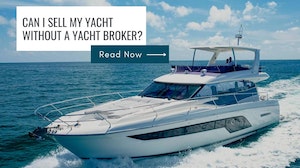 Can I Sell My Yacht Without A Broker?