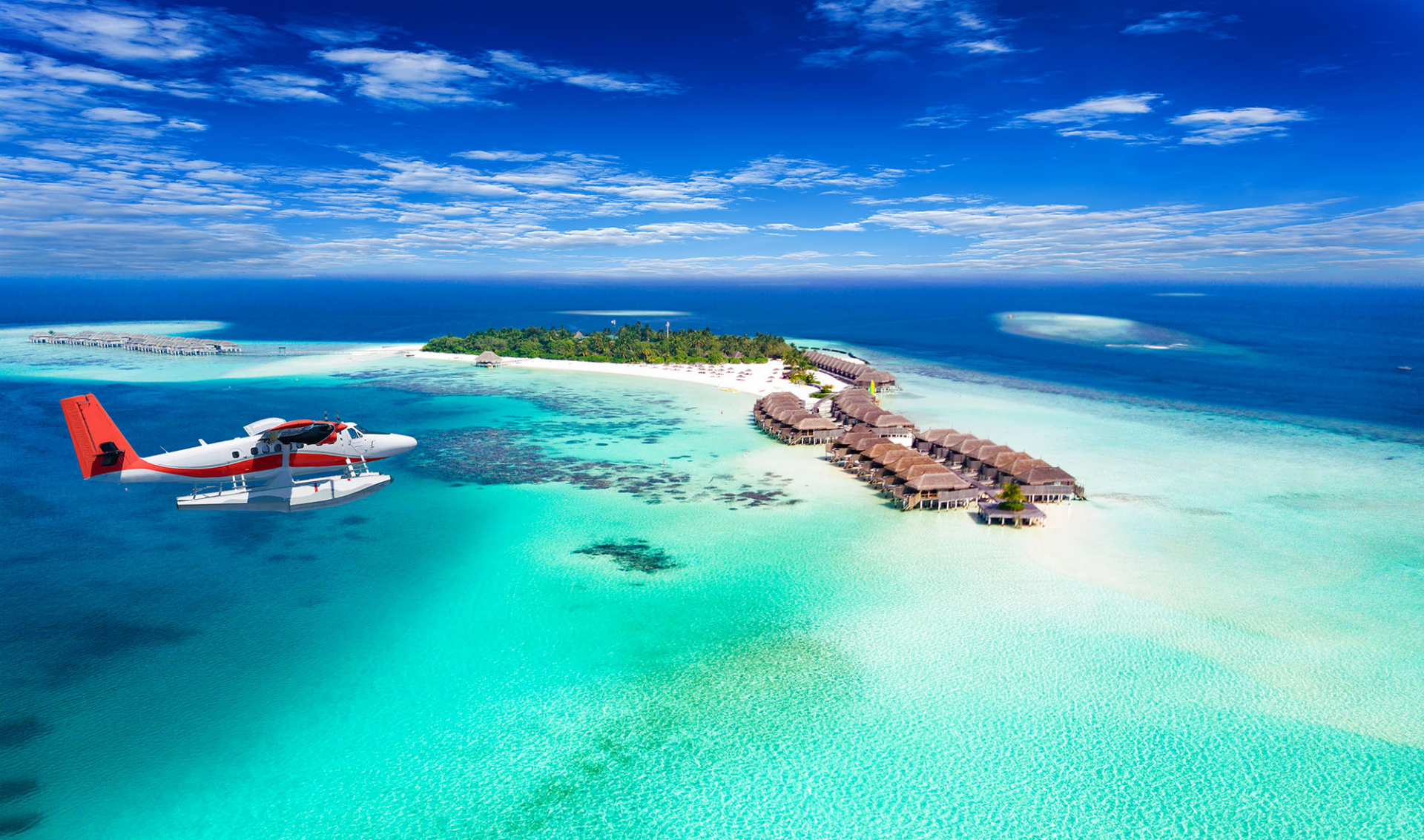 Search Over 35 Yachts In The Maldives & Indian Ocean For Your Luxury Charter Vacation!

Swim with sea turtles, mantas, and whale sharks in this coral reef tropical island paradise! The Maldives is an archipelago of over 1190 coral islands spanning the equator in the Indian Ocean, extending 510 miles north and south, and 80 miles east and west. This paradisical island chain, lying about 370 miles southwest of India and Sri Lanka, was formed from an ancient submerged volcanic mountain range with corals encrusting and building up the sunken craters over the millennia to form lagoons and island clusters (atolls). These palm tree covered islands with powdery white sand beaches include 26 atolls (ring-like coral formations) that make the Maldives a world-class diving destination and ultimate escapist destination! Protected from monsoon damage by outer reefs and fed by Indian Ocean currents, the atoll reefs are dazzling underwater gardens of Eden supporting diverse marine biosystems that are carefully protected as reserves. Of the 200 inhabited islands, most are occupied by extravagant resorts, hotels, and restaurants that defy one’s imagination for luxury and amenities! With its remote, postcard perfect beauty and natural attractions, Maldives is one of the world’s top honeymoon destinations and was named “World’s Leading Destination 2020.” With plenty of deep anchorages around the islands, Maldives is growing as a superyacht destination for a winter alternative to the Caribbean Islands.

An aerial seaplane flies by an island in the Maldives. 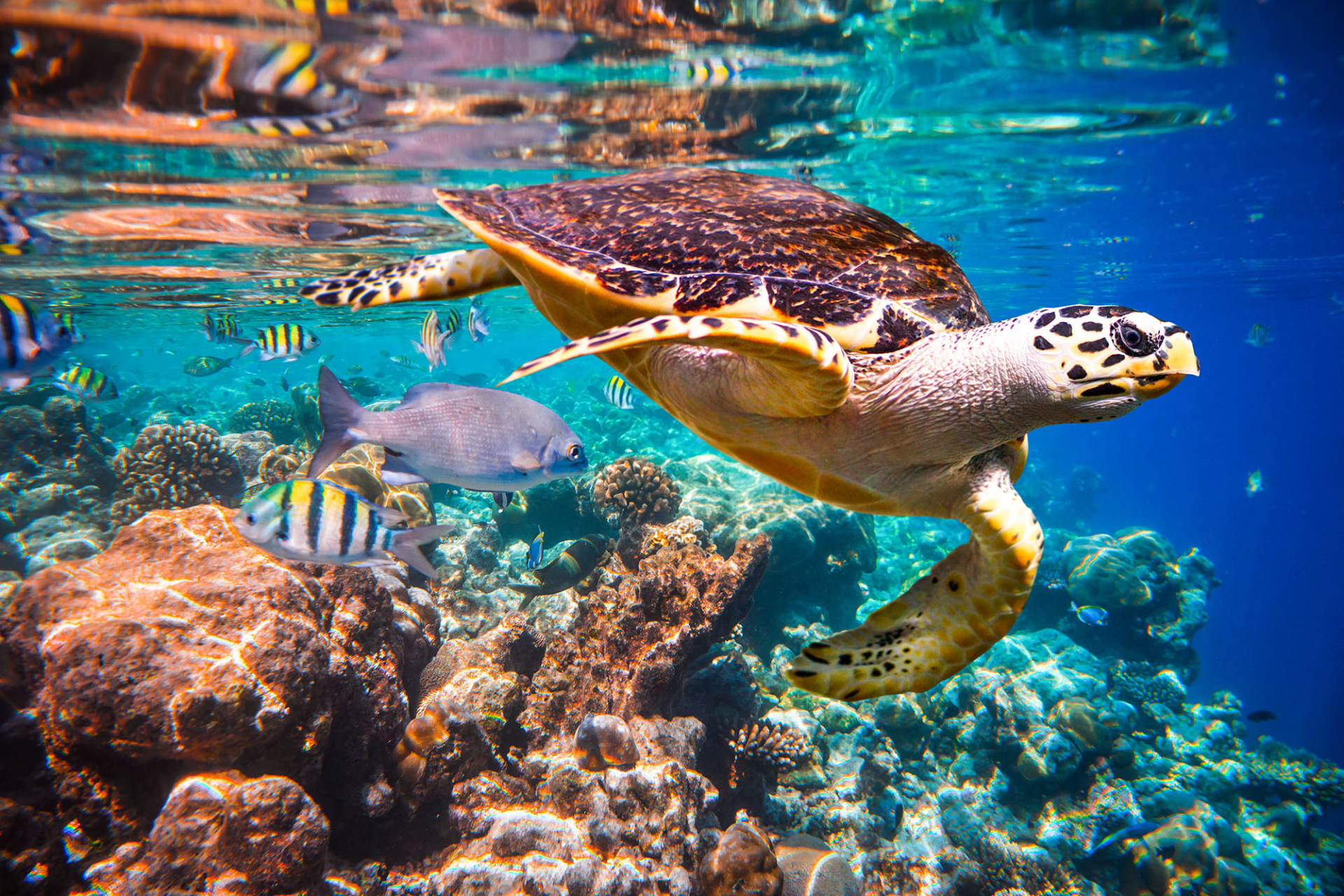 A Hawksbill Turtle swims over a lively coral reef in the Maldives. 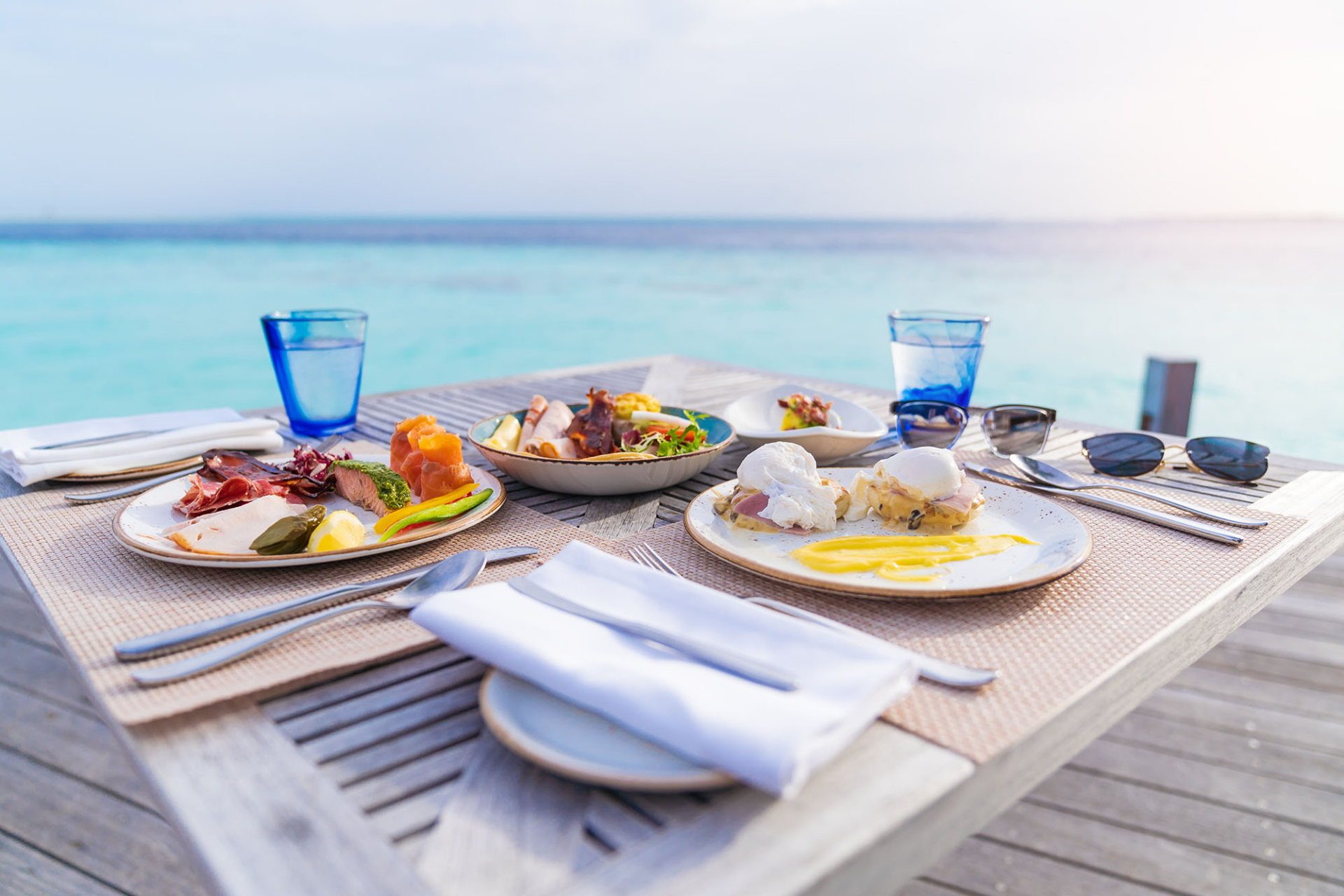 Enjoy an amazing breakfast with an island view every morning. 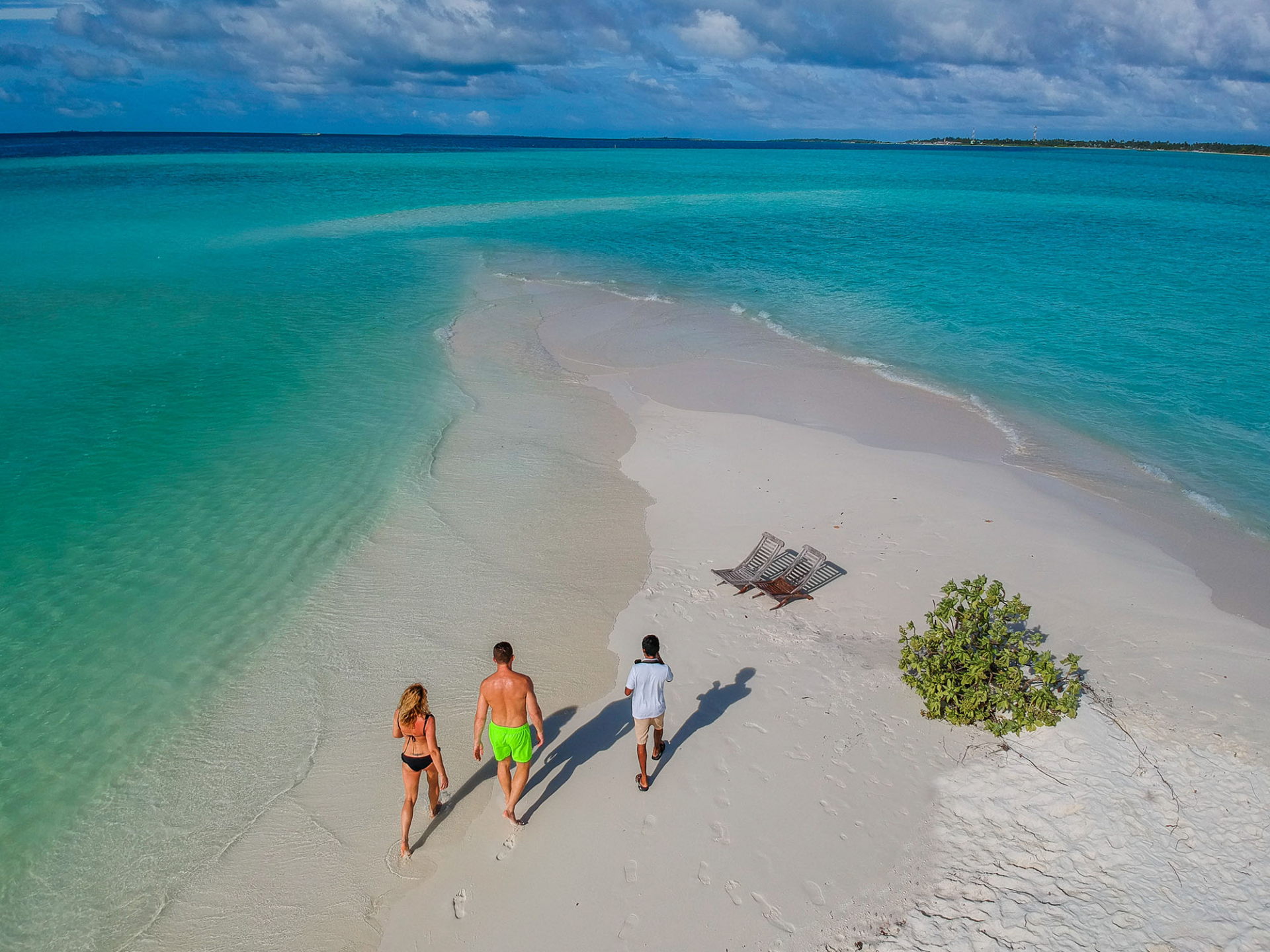 Stroll on one of many deserted islands in the Maldives. 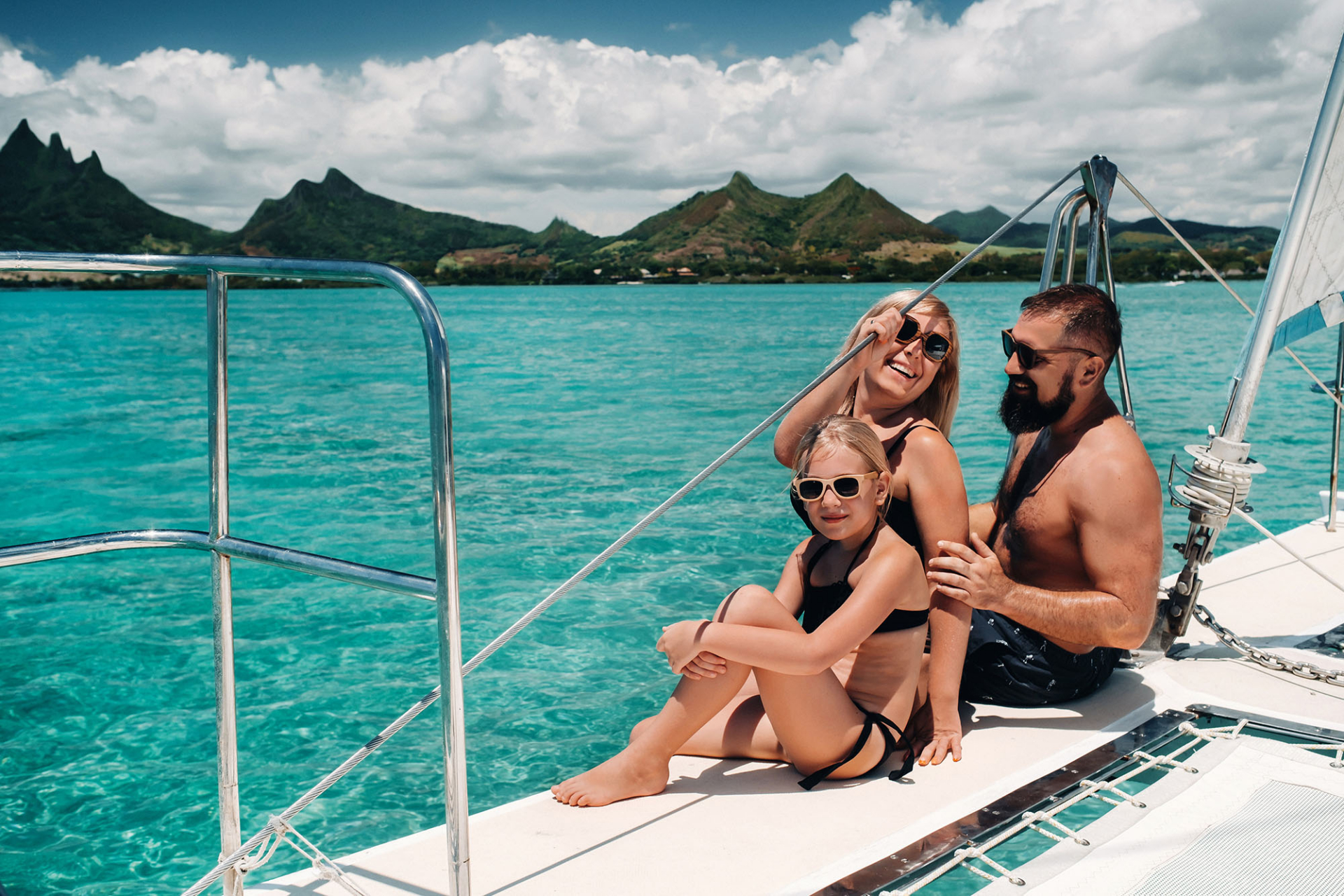 Enjoy sailing a luxury catamaran near the Island of Mauritius.

Part of the vast submarine mountain range in the Indian Ocean known as the Chagos-Laccadive Ridge, Maldives is the world’s lowest lying country with only 17’ above sea level at its highest point. Average annual temperatures range from 76° F to 86° F with SW monsoon winds bringing rain in May-August while the NE monsoon winds in December-March bring dry, mild weather. The perfect year-round tropical climate, with some of the best beaches and best diving spots in the world keep visitors coming back to the Maldives. A luxury yacht charter is an ideal way to experience these remote islands with their secluded, pristine beaches and warm turquoise water lagoons that are great for enjoying your yacht’s water toys: jet skis, kayaks; snorkeling or diving the many coral reefs, underwater caves, and shipwrecks. Island-hop through 26 atolls with over 1000 islands to explore from your private yacht resort!

Although there is evidence of the islands’ inhabitation well over 2500 years ago, very little is known of Maldives ancient history. There have been many cultural influences due to its geographical location as a trading route stopover for people of different ethnicities traversing the Indian Ocean. Over the centuries, there have been waves of settlement from India and the Indian Ocean rim. In 1996-1988 the ruins of a pre-Islamic period (12th century AD) Buddhist monastery complex dating to 7-8th century AD, were excavated in the Kuruhinna Tharaagandu site on Kaashidhoo island, with some artifacts displayed in the National Museum in Malé. Historians found the oldest written records of Maldives, the Isdhoo Loamaafaanu copper book dated 1190AD and written in an ancient script, in the Old Mosque (Laamu Isdhoo) built in 1701. The Old Friday Mosque on Malé is the oldest in the islands, dating to 1656.

Built of decorated coral stone with intricate carvings and Quaraic script, it is still in use today. Visitors must be respectfully (conservatively) dressed to visit the mosques, and cannot visit during prayer times. The modern Grand Friday Mosque’s golden dome is a prominent feature of Malé’s skyline. This elegant white marble mosque was built in 1984, off the main square, Jumhooree Maidan. Conservatively dressed visitors are welcome, but not during prayer times. Malé is the most densely populated island and pulses with the activities of commerce in stark contrast to the iconic sand and palm tree atolls that give the Maldives its deserted tropical island allure. The lively fish market is where the day’s catch is processed—tuna, octopus, grouper, and more. The produce market features homegrown produce such as coconuts, bananas, breadfruit, papaya, mango, taro, betel, chilies, sweet potatoes, and onions.

Most staple items must be imported as farmable land is very limited. Malé is also the political center of Maldives. Tourism is the main source of income for Maldives and the government is very supportive, investing in infrastructure such as marinas and luxury guesthouses designed to blend with the island’s natural attributes and minimally impact the environment.

Superyachts can drop anchor in deep water just about anywhere in the many peaceful anchorages. The North Malé Atoll is frequently the first port of call with its commercial port, small-yacht marina, and airport. Capital city Malé is the gateway (port of entry) to the entire island chain. Cruise northward to the UNESCO protected Baa Atoll for incredible underwater experiences and the amenities of the “world’s finest 5-star islands.” The globally significant Baa Atoll Biosphere is one of the largest groups of coral reefs in the Indian Ocean teeming with diverse marine life that thrill snorkelers and divers of all levels of proficiency. The Baa Atolls nine core areas consist of diverse habitats. Coral reefs, islands, seagrass beds, and mangroves are home to 1,200 marine species, 250 species of stony and soft corals, sea turtles, manta rays, whale sharks and sea birds, including the endangered green sea turtle, hawksbill sea turtle, Napoleon wrasses, and tawny nurse shark.

The Biosphere area is strictly monitored; extraction of anything is prohibited, as is anchoring. The private 5-star Antara Kihava Resort on the Baa Atoll features an award-winning underwater restaurant with the world’s first underwater wine cellar and a dining room completely surrounded by the sea. Guests can watch colorful, tropical reef fish, turtles, and sharks swim by while enjoying contemporary European cuisine, served impeccably. Some menu highlights are lobster salad, Scottish salmon, and sea bass. Antara Resort also features world-class over water Spa treatments and a Sky Bar—a cocktail lounge with the Maldives’ first over water observatory! Guests can star-gaze through a powerful telescope without the dimming effect of ambient city lights.

The island’s reef is known as the Golden Wall diving destination. Corals in varying hues of golden color festoon “the wall” as each drop hosts a variety of sea creatures, schools of colorful fish and endangered hawksbill sea turtles. Luxury Resort Midaidlhoo Island on Baa Atoll is great for snorkeling. Feast on Maldivian lobster, mahi-mahi, and grilled octopus at the Shoreline Grill or Ba’theli, situated over the water at end of pier, for Maldivian cuisine.

The Addu Nature Park on Hithadhoo Island in the Addu Atoll is the southernmost atoll with 5 inhabited islands and offers a range of recreational activities such as cycling and kayaking through scenic Bedhi bay, the second largest wetlands in Maldives. Two species of large fruit bats (flying foxes) fly out of coconut and banana trees at dusk in search of food (fruit, seeds, nuts) and to sip water from the pools. These huge bats with a wingspan of up to 4.5 ft can fly great distances in search of food and are helpful in spreading seeds and pollen to other islands. The Addu Atoll is the only Atoll below the equator and is famous for its many dive locations that accommodate beginners as well as experienced divers.

Gan Inside is great for beginners with its shallower walls and less current, and plenty of marine life. Torpedoed in WWII by a German U-boat, British Loyalty is the largest wreck in Maldives, for a historically interesting dive along with its coral and reef fish species. Other noteworthy dive sites are Shark Point with “shark hotel” where divers can swim with 15-20 docile grey reef sharks that habituate the area, and Turtle Point is frequented by green and hawksbill sea turtles, for a good chance of encountering these gentle creatures. Southernmost Gan island, with its own airport, is a Clearance Port for visiting yachts, besides capital city Malé located near the center of the archipelago on Motu island.

North Malé Atoll was the first site established for tourism. It is well-established and popular with divers for its underwater scenery and abundant marine life. Visitors can swim with mantas year-round in North Malé, and especially from May to October at “Manta Point” where cleaner wrasse “clean” the manta rays of parasites on a coral outcropping about 24 ft below surface. Other popular diving attractions are the Victory Wreck (a cargo shipwreck near Hulhulé), Nassimo Thila with caves and formations, HP reef with caves and crevices, and Banana Reef with lots of fish and sea creatures. The Shipyard in Lhaviyani Atoll features two 40-year-old wrecks covered with corals and loads of fish and is one of the biggest diving attractions of Maldives. One wreck sticks out of the water like a breaching whale!

The South Ari Atoll is the best place to spot and swim with whale sharks that frequent the channel south of the atoll. These gentle giants feed on plankton. Whale sharks can also be spotted near Alifu Dhaalu Atoll; peak time of whale shark sightings is August – November. Hanifaru Bay is a great place to swim with mantas in the bay’s protected environment as they gather to feed on plankton, small fish, and crustaceans especially during May – November season on full moons; it is quite the underwater spectacle! Maldives has the largest reef manta population in the world, and some giant oceanic mantas with a wingspan of up to 12 ft. have been sighted between Addu Atoll and Fuvahmulah Atoll.

Some world-class lavish, fantasy island resorts in the Maldives are Six Senses Resort & Spa, One & Only Reethi Rah, Huvafen Fushi, Cheval Blanc Randheli, Como Maalifushi & Spa, Soneva Fushi (“Castaway Chic”), Park Hyatt Maldives Hadahaa (Huvadhoo is the largest and deepest atoll with some of the best snorkeling), W Retreat & Spa (Marriott Intl.), Gili Lankanfushi (one of the best water villa resorts in the world), Cocoa Island by COMO with Shambhala Spa is on a tiny uninhabited island, Four Seasons Landaa Giraavaru and private island to the south Kuda Huraa, Shangri-La Villingli is a 5-star resort on an island covered by dense tropical jungle, Velaa Private Island (ultra-luxe, extravagant), and Niyama Private Islands in Dhaalu Atoll (features and underwater nightclub). These are just a few of many resorts and luxury guesthouses with excellent restaurants, spas, and other fabulous amenities. Your luxury charter yacht can be your own “private island” in anchorages throughout the picture-perfect islands of Maldives.

FEATURED YACHTS TO CHARTER IN THE Indian Ocean and SE Asia