This Vessel is no longer on the Market

Contact us for more information about what similar boats are currently available.

“Coastal Outlaw” is one of the most extensively upgraded and well-maintained Viking 65’ Enclosed Bridge Sportfish on the market. There has been no expense spared by the current owner in the overall maintenance of this boat. She has been consistently maintained throughout her life by a full-time captain with a keen eye for detail. Re-painted from top to bottom by Viking South in 2012, she stands tall and shines like new. Coastal Outlaw is well suited for extended travel to exotic locals as well as the competitive fishing scene.


United Yacht Sales is pleased to assist you in the purchase of this vessel. This boat is centrally listed by Galati Yacht Sales. It is offered as a convenience by this broker/dealer to its clients and is not intended to convey direct representation of a particular vessel

From the cockpit, you enter the massive and well-appointed salon via Viking’s trademark electric sliding door. As you step into the salon you notice the plush U-shaped lounge seating to port with a custom hi-gloss teak coffee table in the center. Upon further inspection, to starboard, you see beautiful juno teak cabinetry, valances, and lambrequins with a shimmering hi-gloss finish as well as the spiral staircase to the flybridge. Concealed behind and beneath the cabinetry is the main systems breaker panels, and top of the line audio/visual equipment, as well as a custom bar with high-capacity bottle storage. The salon is very well lit by recessed overhead LED lighting and has high-end designer carpeting throughout.

As you move forward from the salon and take a slight step up onto the teak and holly sole you will notice the large dinette with custom upholstered U-shaped seating that surrounds a gorgeous hi-gloss teak table. Located beneath the seating area is ample storage for tackle and other gear. On the forward bulkhead above the dinette you will find a 50” 4K Sony flatscreen for your viewing pleasure.

Moving to port from the dinette you enter the galley, immediately noticing the continuation of the teak and holly sole and hi-gloss finishes throughout. The large galley has ample drawer and cabinet storage for those extended fishing voyages along will all the amenities of home. Expansive corian countertops are located both fore and aft of the galley with an electric Kenyon cooktop and recessed stainless steel sink and faucet. Conveniently located beneath the countertops are double Sub-Zero drawer-style refrigerator/freezers along with a Kenmore trash compactor, and dishwasher. Just forward of the galley located in the companionway, you will also find a pantry/compartment with ample storage.

Moving forward from the galley and into the companionway, just forward of the dinette, you see the custom tackle storage room. In 2016 the current owner converted what was originally the laundry room into a custom tackle room with convenient and ample storage throughout.

Moving on from the tackle room down the companionway stairs to port you see the entrance to the Master Stateroom. As you step into the master you can’t help but notice the sheer expansiveness of the room. Located athwartships you find a king-size bed with custom rod storage beneath that is saddled by teak nightstands. As you move aft past the bed you see the lower parlor area with ultra-leather sofa to port, a work station to starboard, and a large closet with mirrored double doors. Concealed behind the aft bulkhead of the parlor is a custom lockable rod locker.

As you move forward up the parlor stairway and past the king berth you see the large master head with a full-size walk-in shower stall, corian topped vanity with sink and Vacuflush toilet.

As you reach the bottom of the companionway steps, you will see the guest stateroom to starboard. Upon entering the stateroom, there are two large bunks single bunks in the over/under configuration. Forward of the bunks a cedar-lined standup hanging locker with lower drawer storage affixed to the bulkhead. Positioned above the hanging locker is a 24” LED TV with a Direct TV sat box. Aft of the stateroom you find the private entrance to the guest head.

With entrances located from the starboard guest stateroom aft and at the base of the companionway stairs, the guest/day head provides easy access. Once inside the guest/day head you will find a large standup shower stall, corian topped vanity with full sink, mirrored medicine cabinet and vacuflush toilet. All the necessary amenities to make your guests feel at home while at sea.

Located in the bow area of the vessel the VIP stateroom is nicely appointed with a queen island berth, plush carpeting, and hi-gloss teak cabinetry with ample storage space.

Accessed from a spiral staircase located in the salon as well as a ladder from the cockpit mezzanine, the fully enclosed bridge is large and spacious and is perfect for extended traveling all while in a comfortable climate-controlled environment. Located in the forward section of the flybridge is a single captain’s chair straddled by bench-style companion seating to port and starboard with an expansive helm area, with updated Furuno electronics, top-end navigational aids and unimpeded visibility through the large windows. Aft of the helm area you will find L-shaped lounge seating with a custom teak coffee table, perfect for entertaining while taking in the scenery. Aft of the enclosed bridge outside of the enclosure is the aft helm deck area with secondary controls to port along with aft-facing bench seating perfect for watching the spread while trolling.

Located in the forward section of the flybridge is a single captain’s chair straddled by bench-style companion seating to port and starboard with an expansive helm area, with updated Furuno electronics in 2016, top end navigational aids and unimpeded visibility through the large windscreen.

Aft of the enclosed bridge outside of the enclosure is the aft helm deck area with a secondary control station to port along with aft-facing bench seating perfect for watching the spread while trolling.

Recent electronics upgrades in “2016” include:

The massive well thought out cockpit of the 65’ pulls no punches and is equipped for bluewater battle. In 2014 custom mezzanine seating was installed by Viking South adding to the cockpit’s overall comfort and fishability.

Seller’s personal effects, tools, gear, and tender. Vessel name “Coastal Outlaw” will not convey with sale and must be changed immediately after sale has been completed as per Seller’s request.

Very clean and extremely well-maintained Viking sportfish with a plethora of upgrades. It is obvious that the boat has been consistently maintained with an open checkbook policy by an experienced full-time captain with an eye for detail. This boat will not disappoint even the most discerning of buyers. 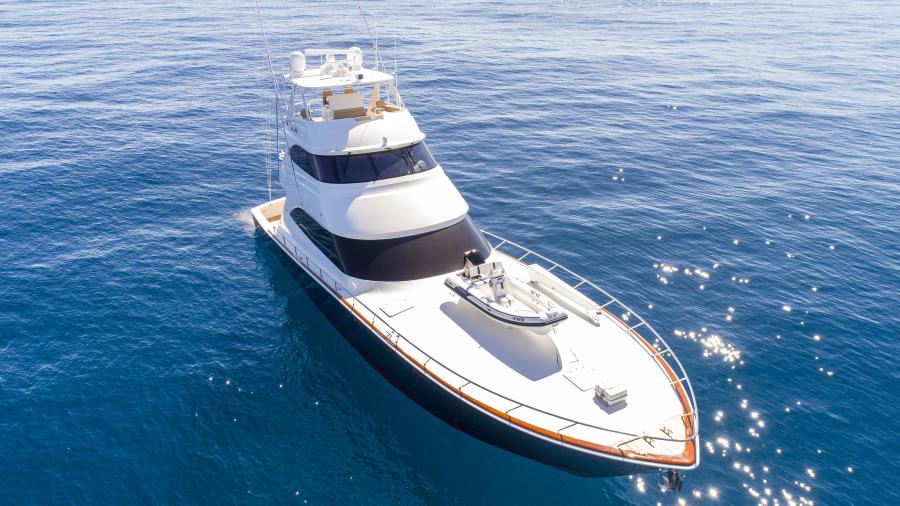 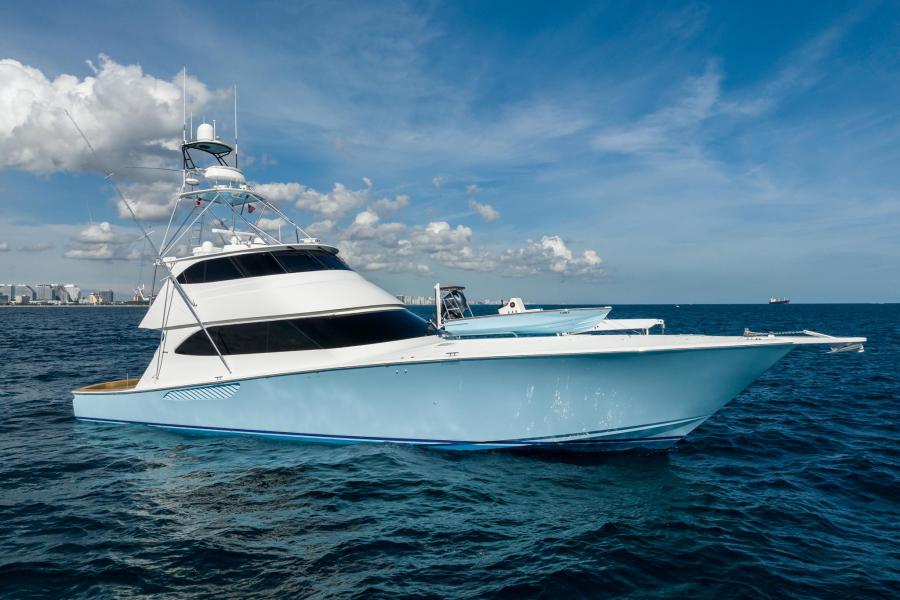 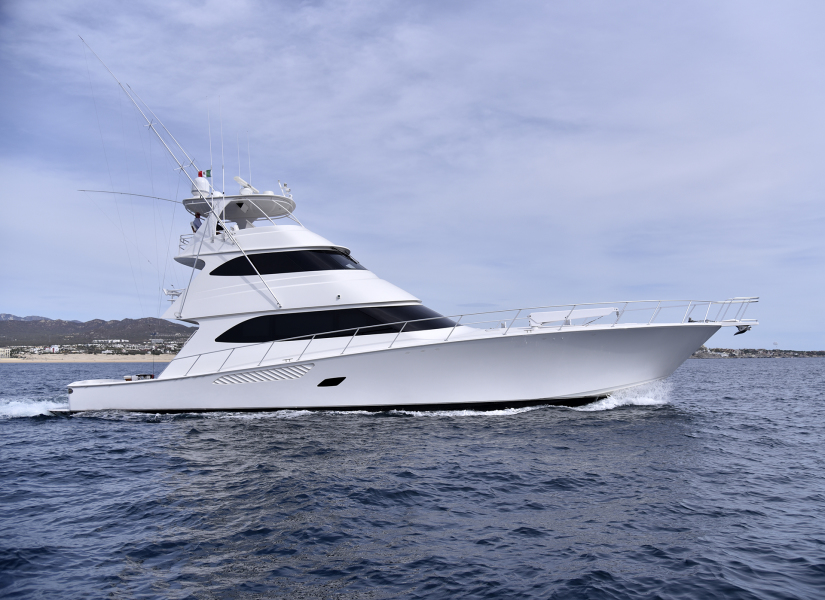