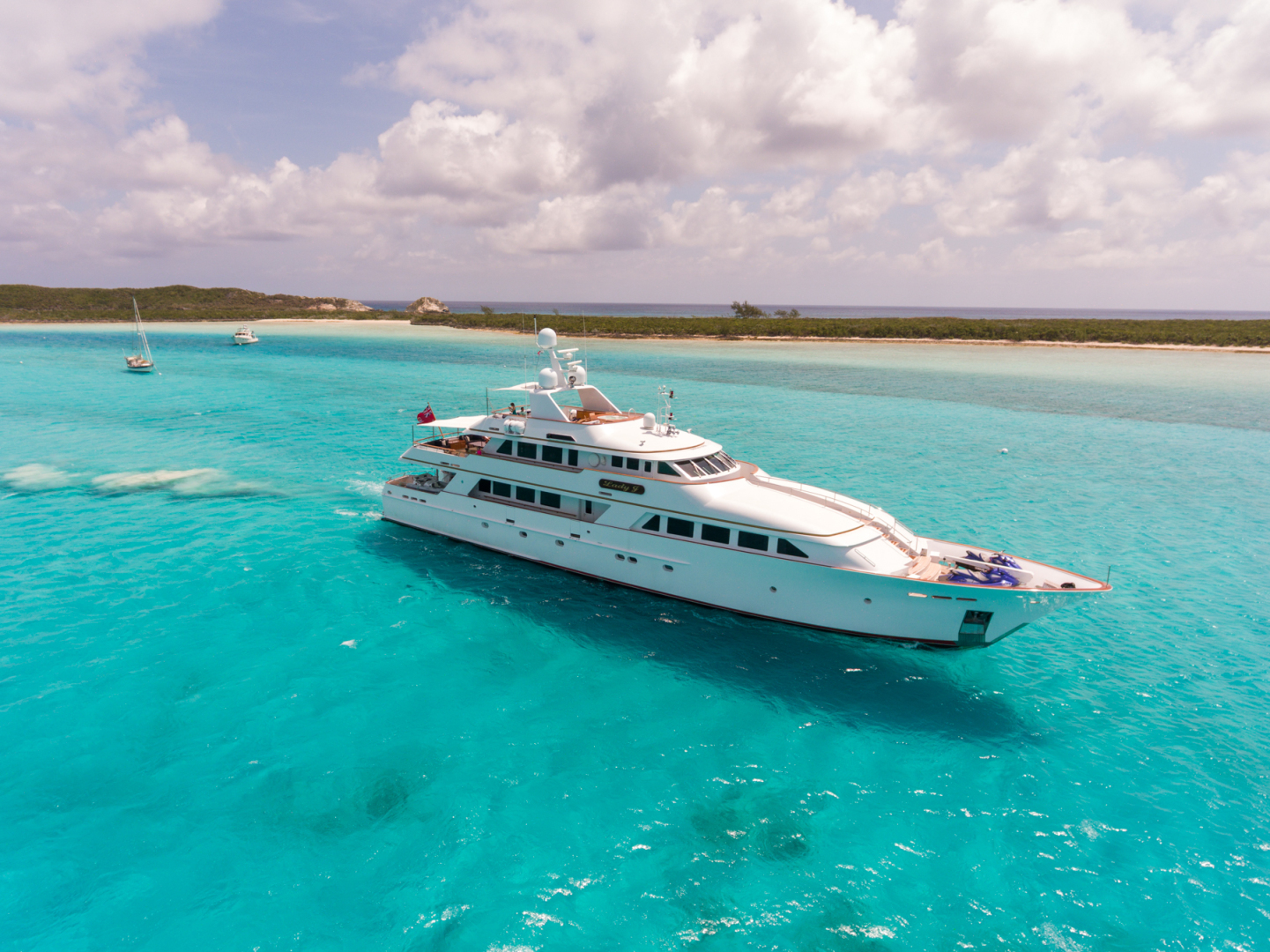 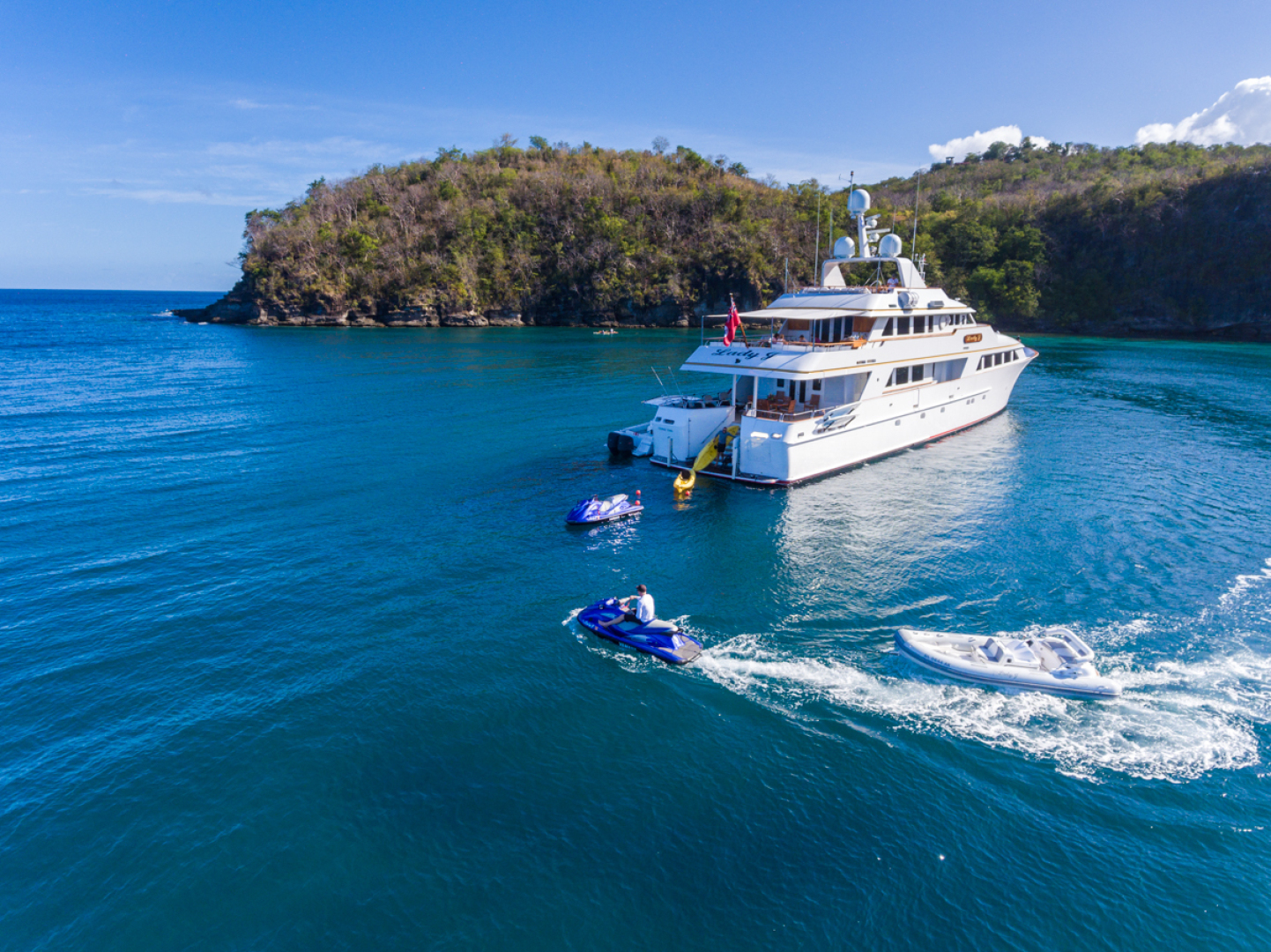 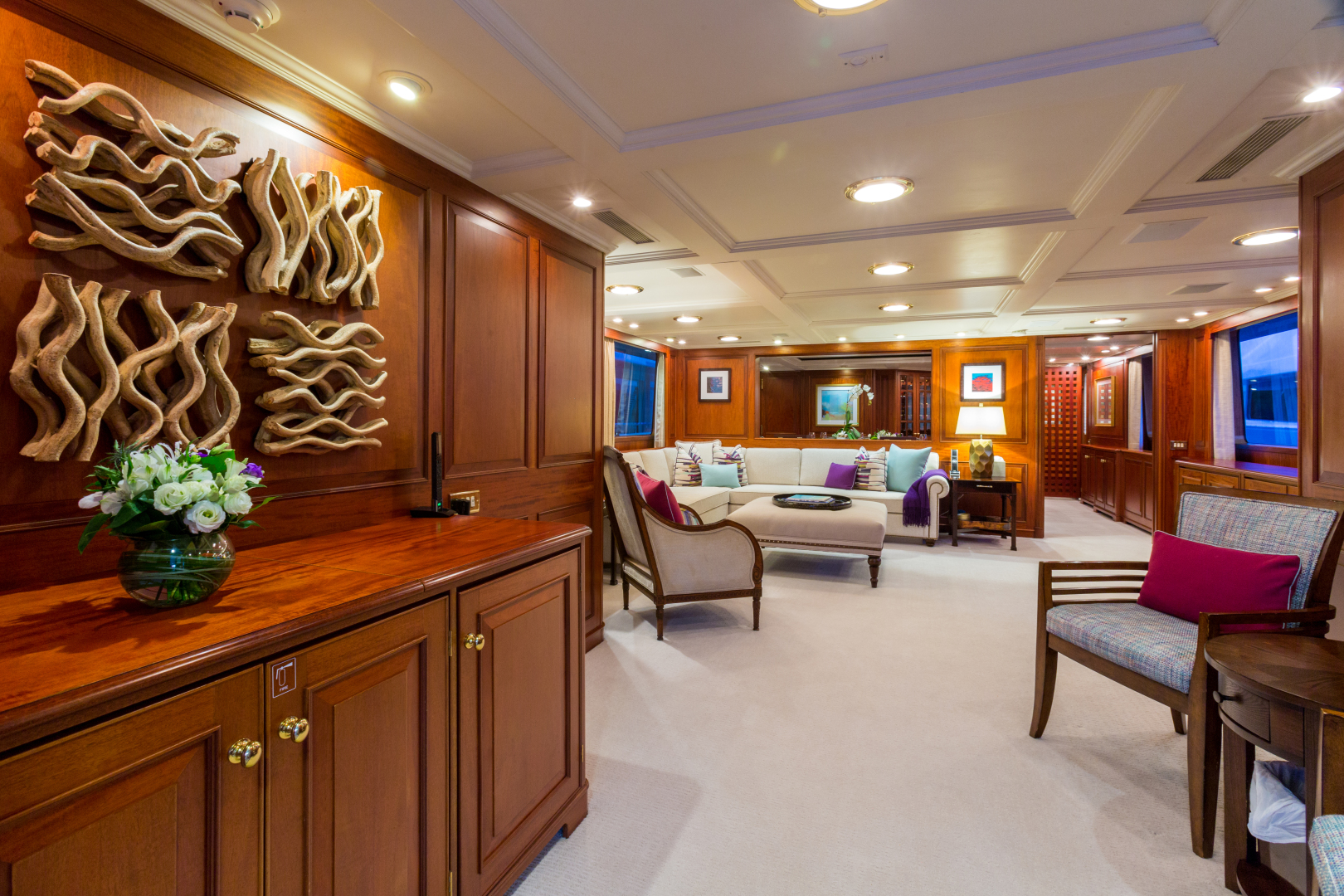 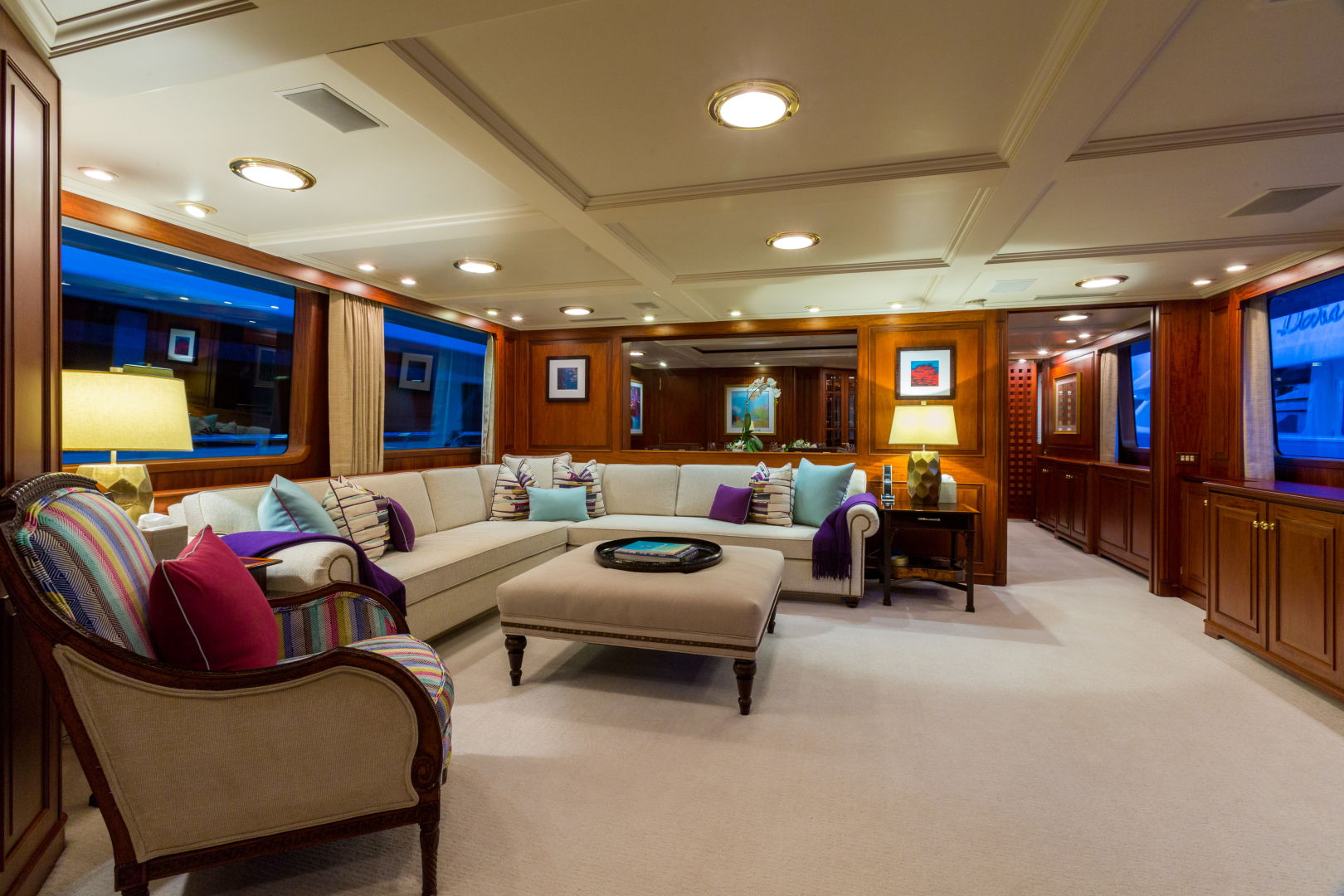 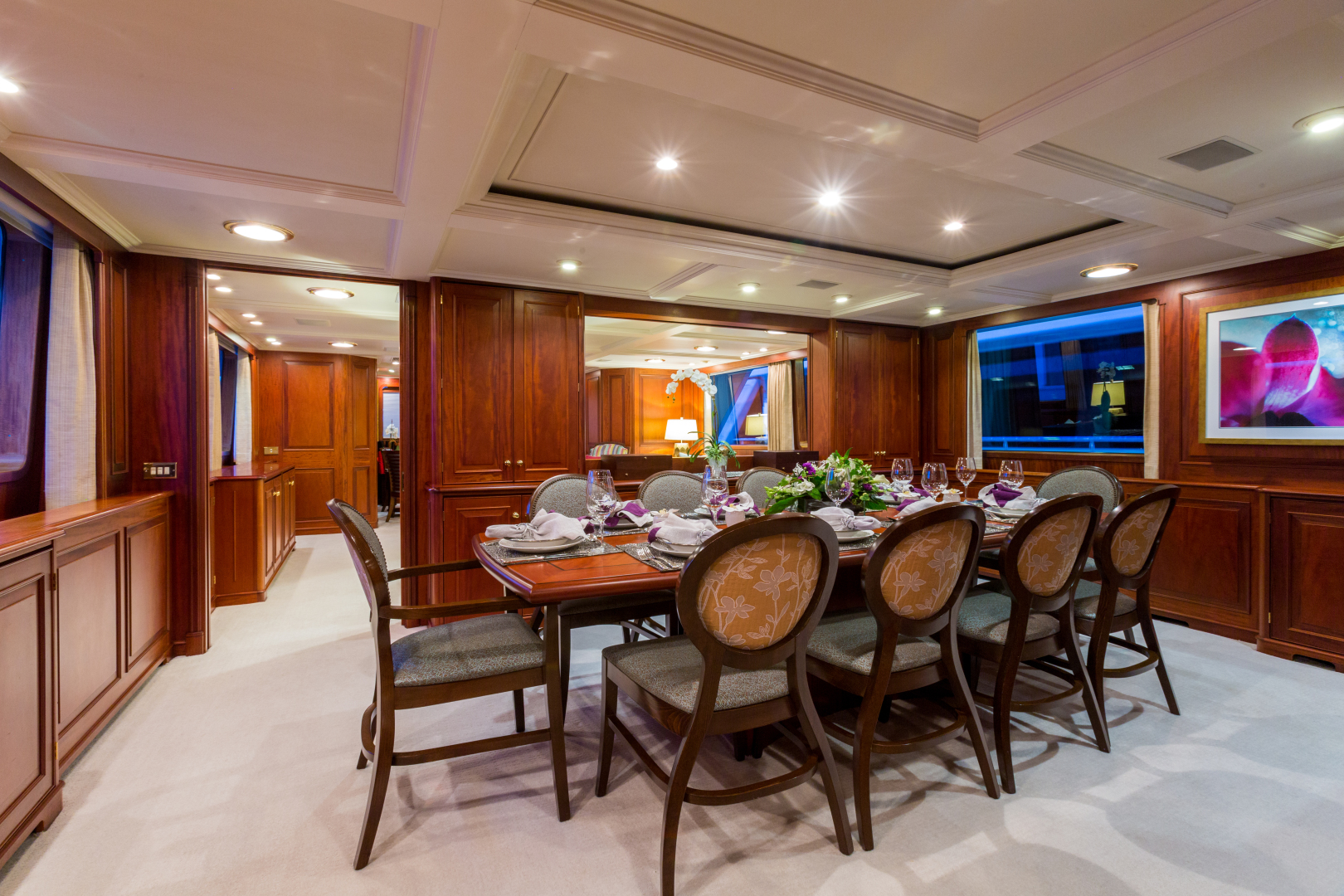 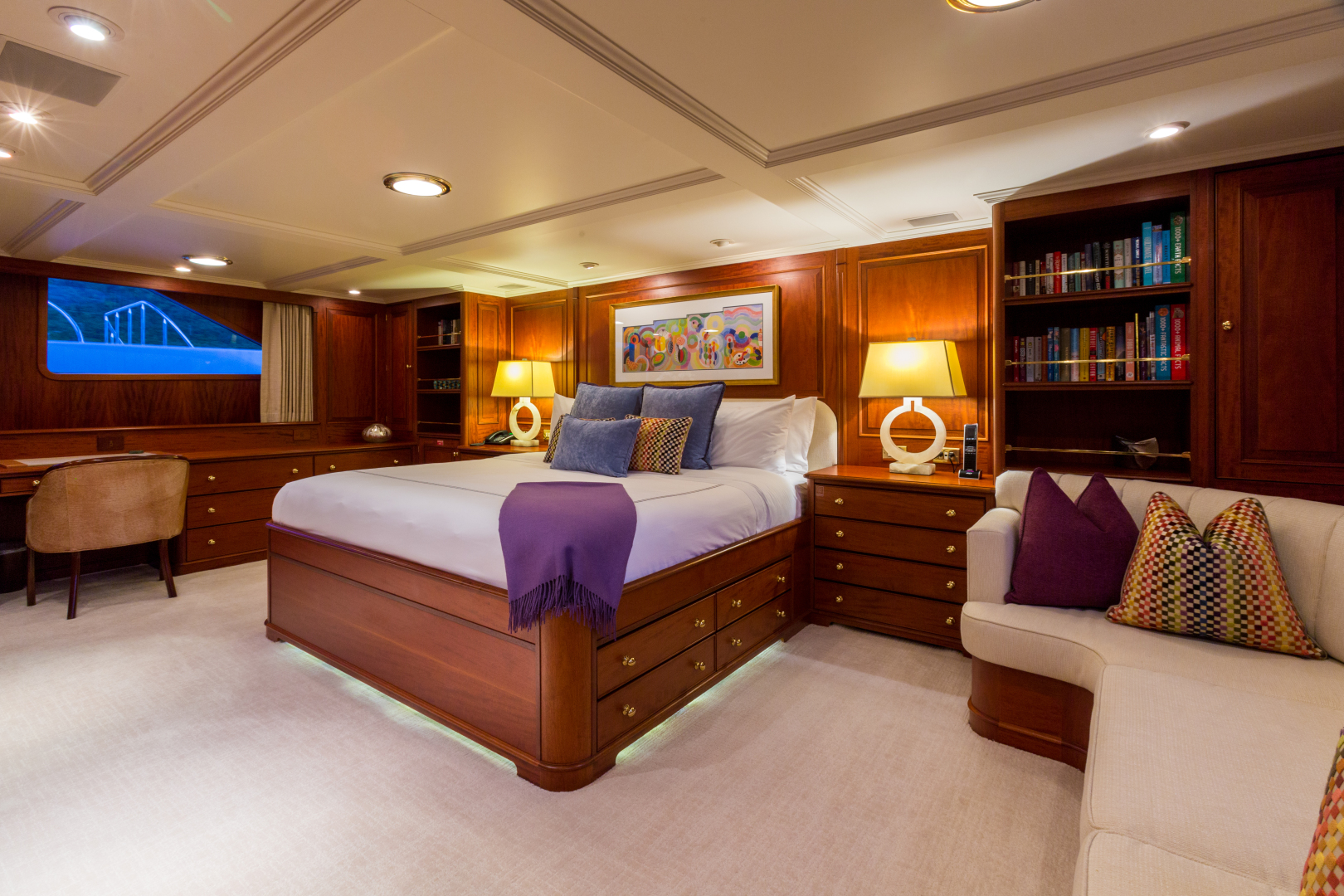 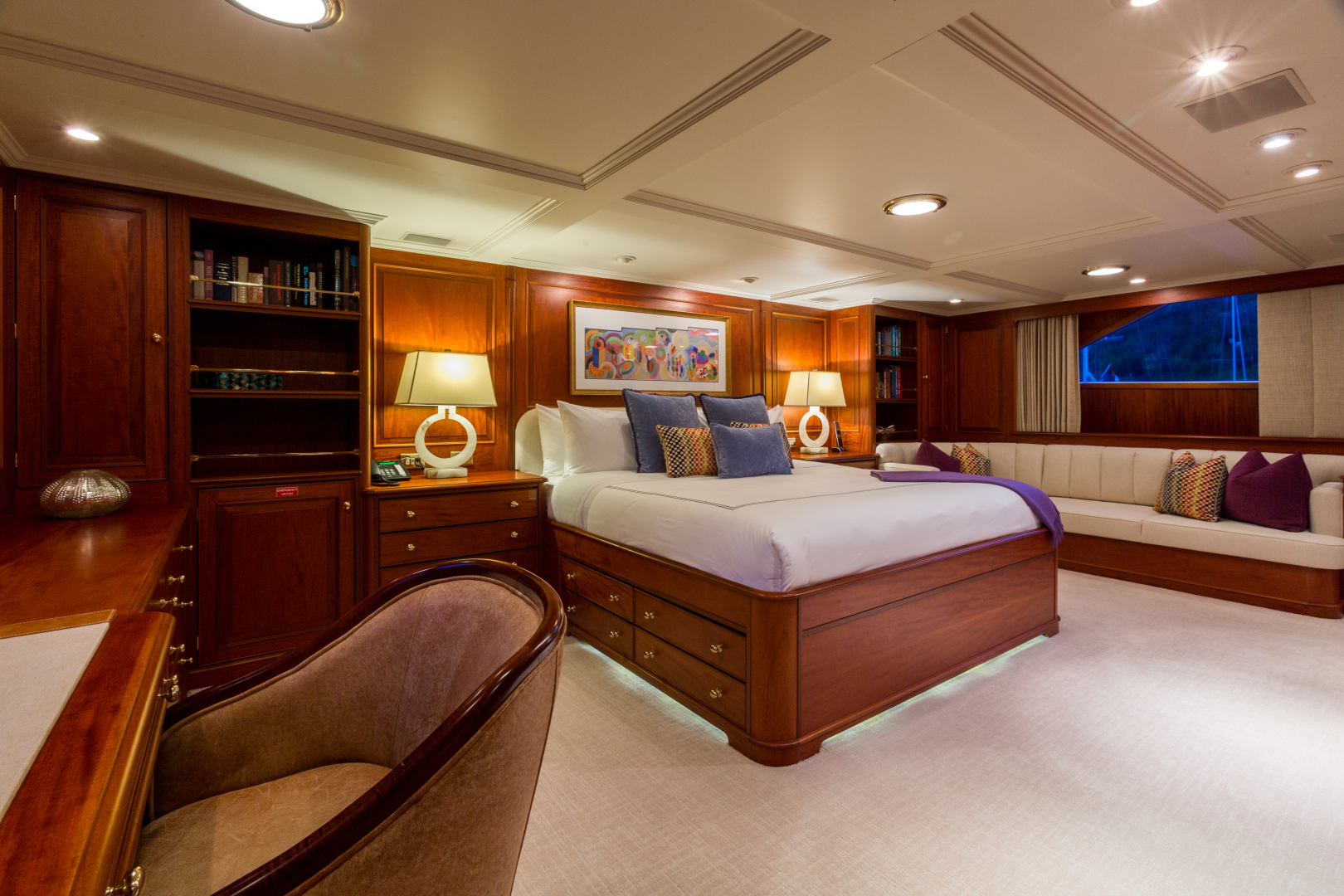 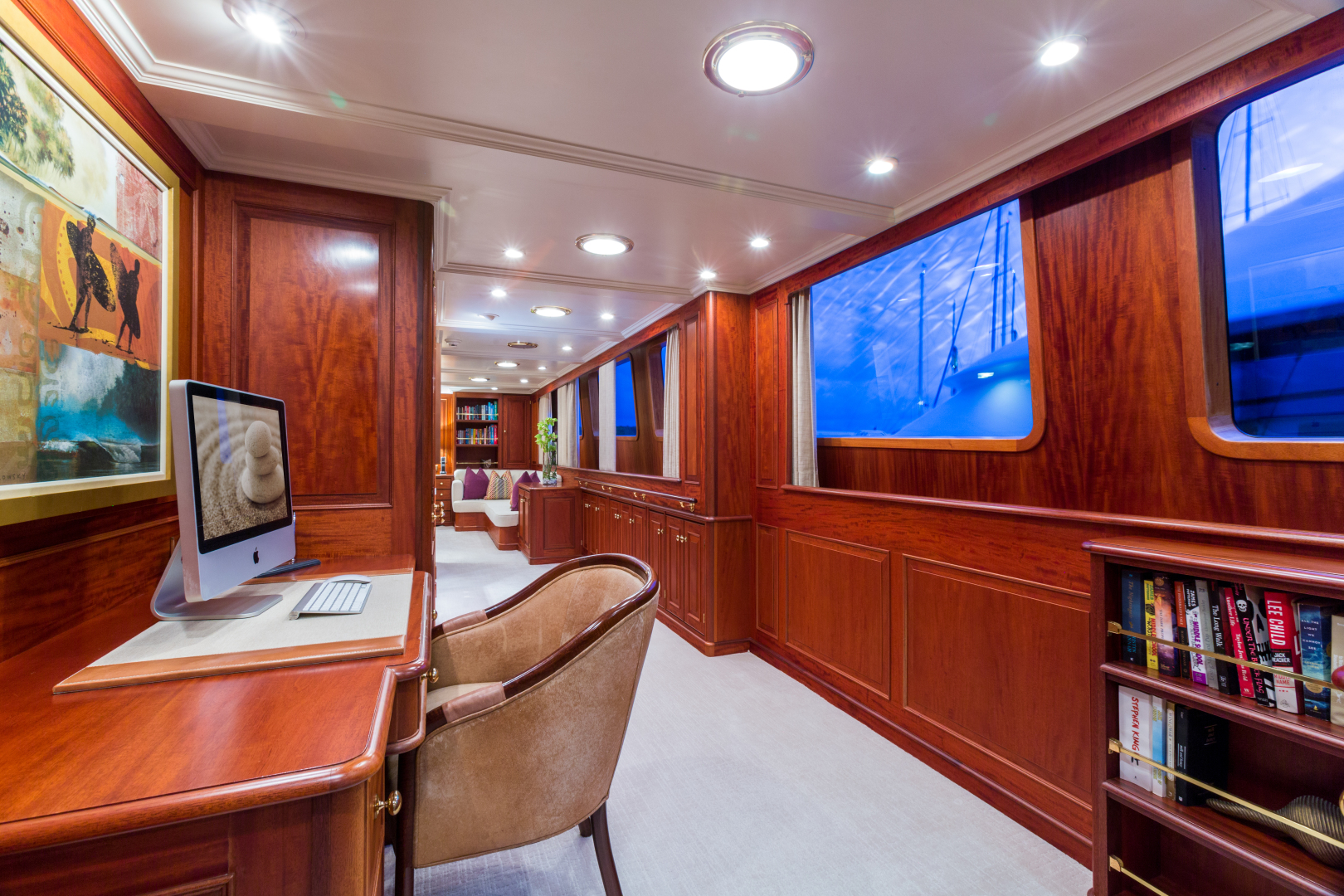 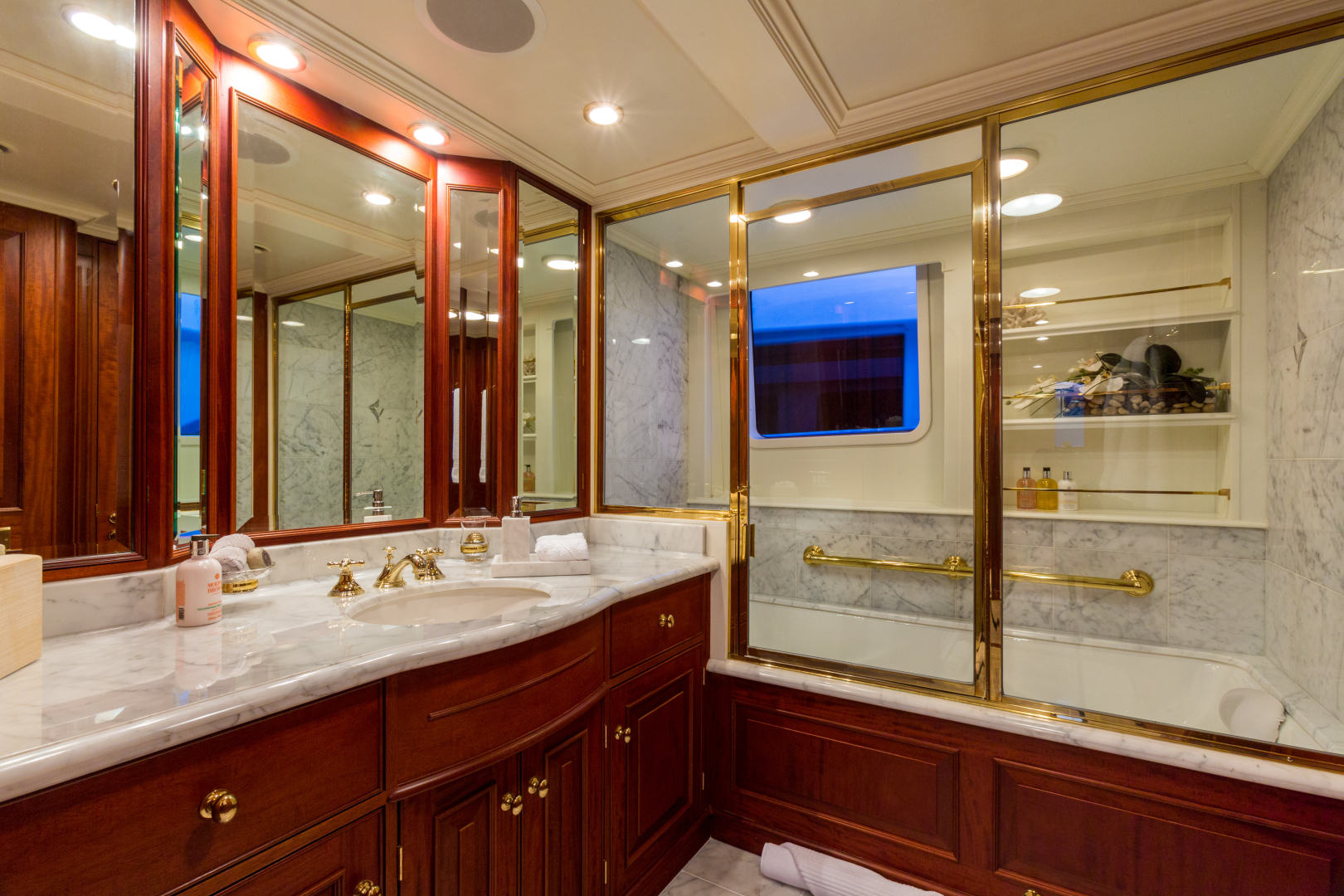 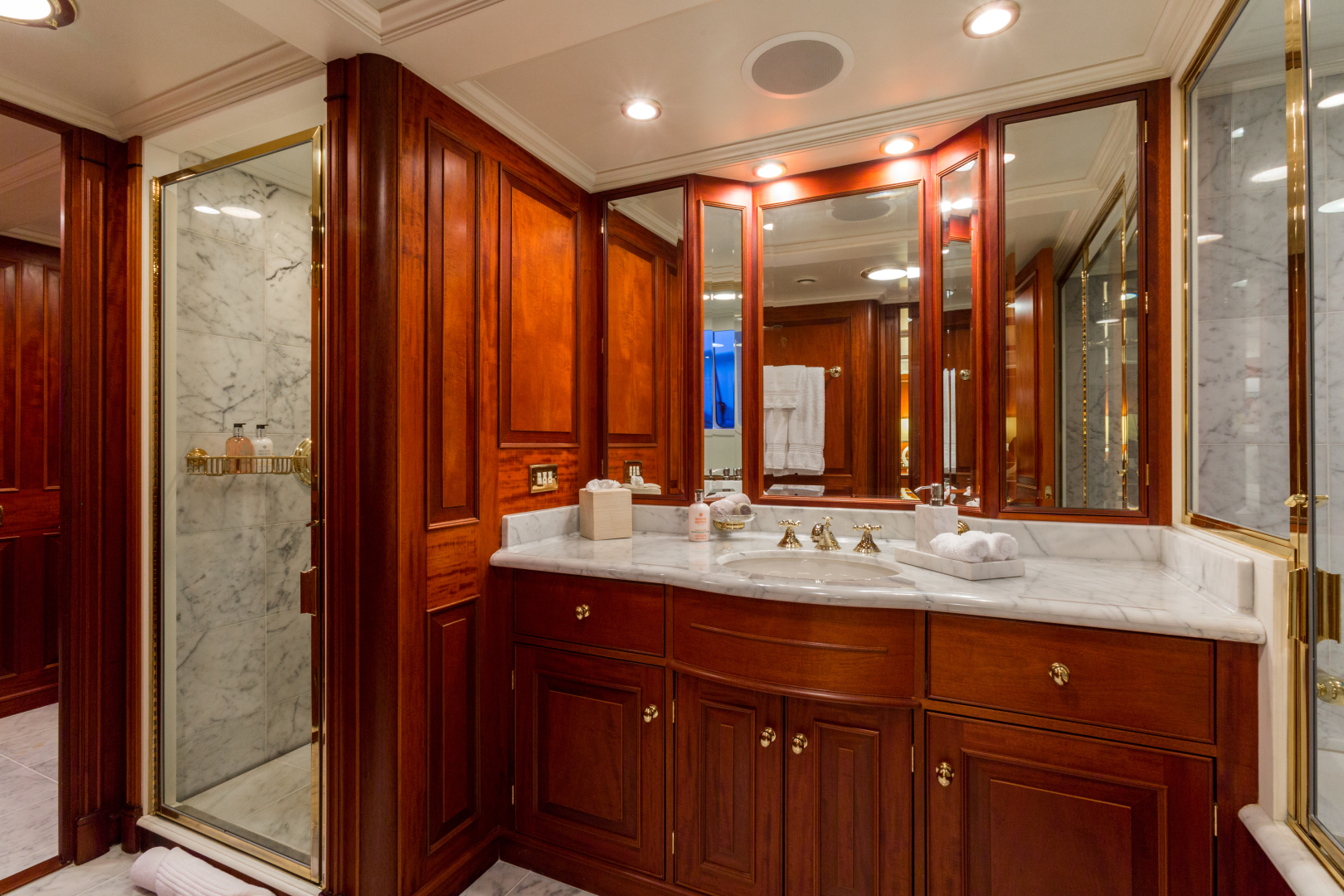 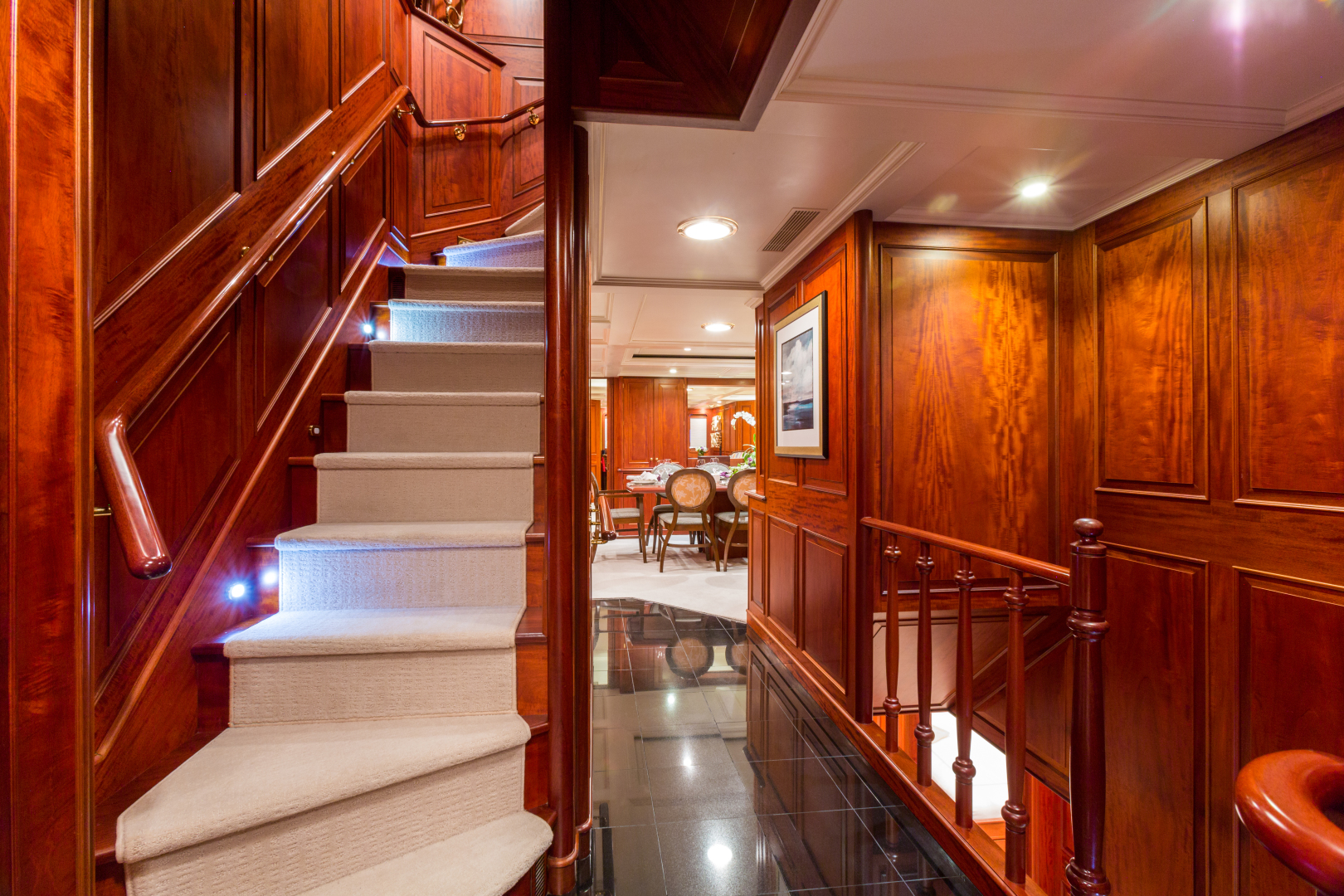 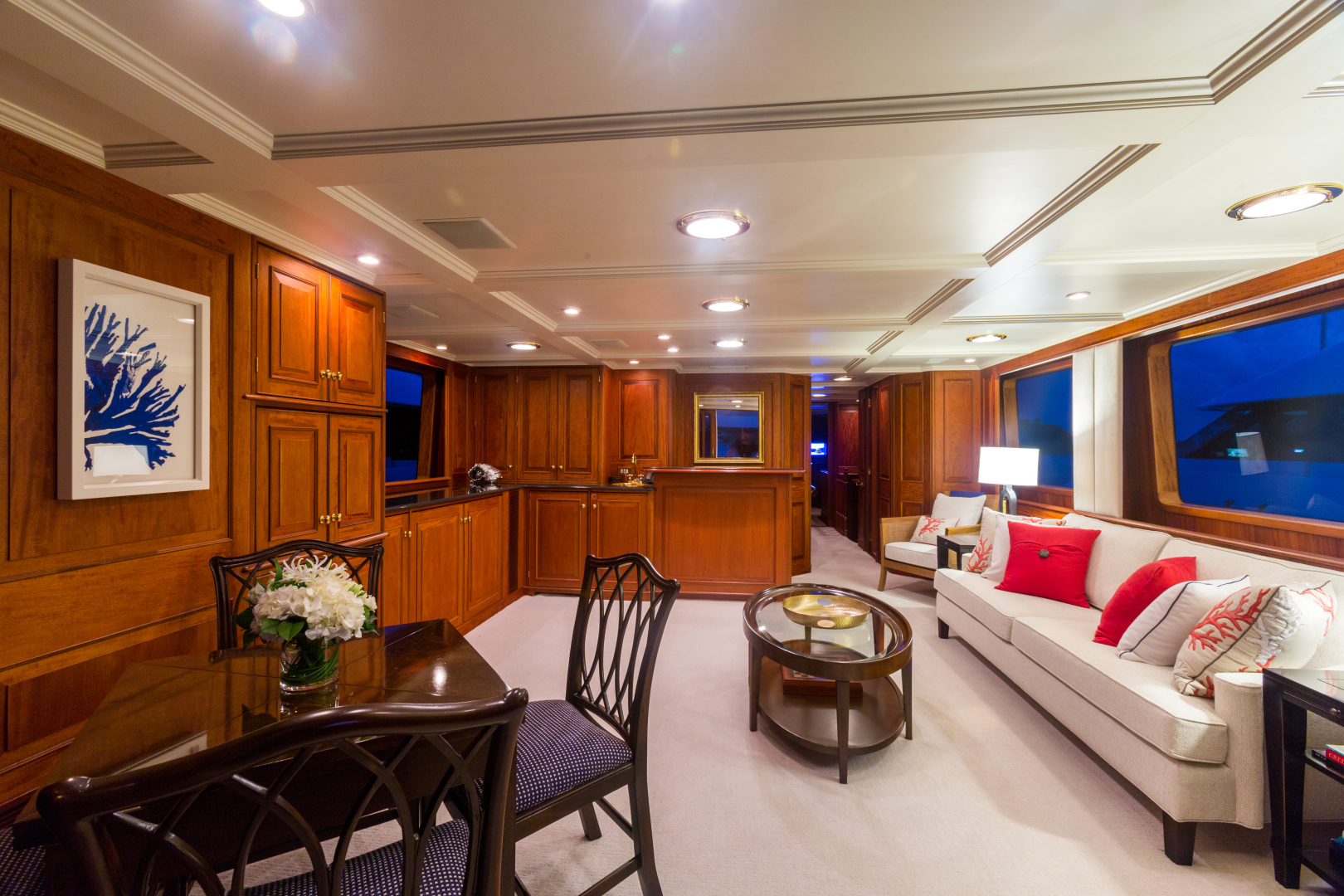 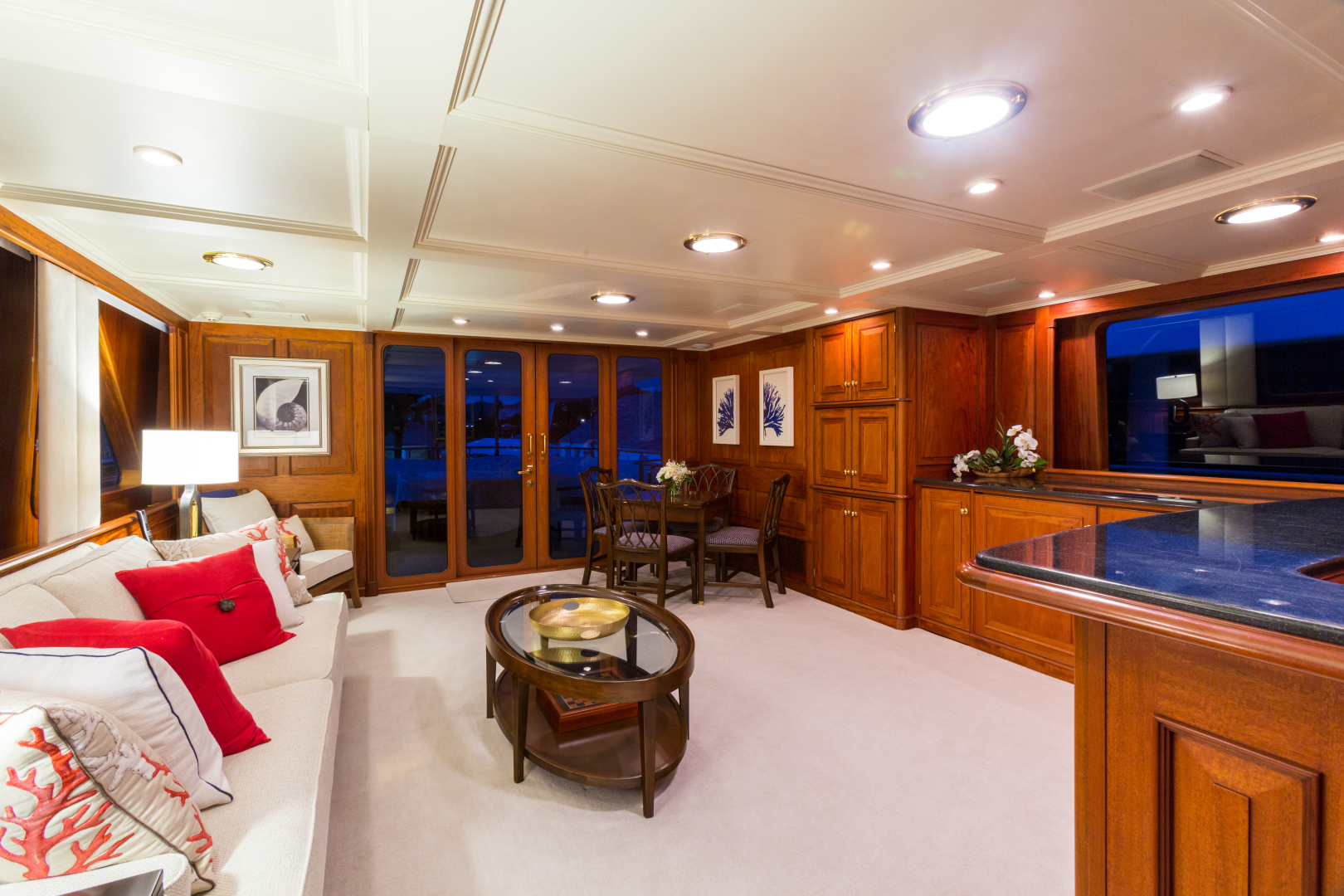 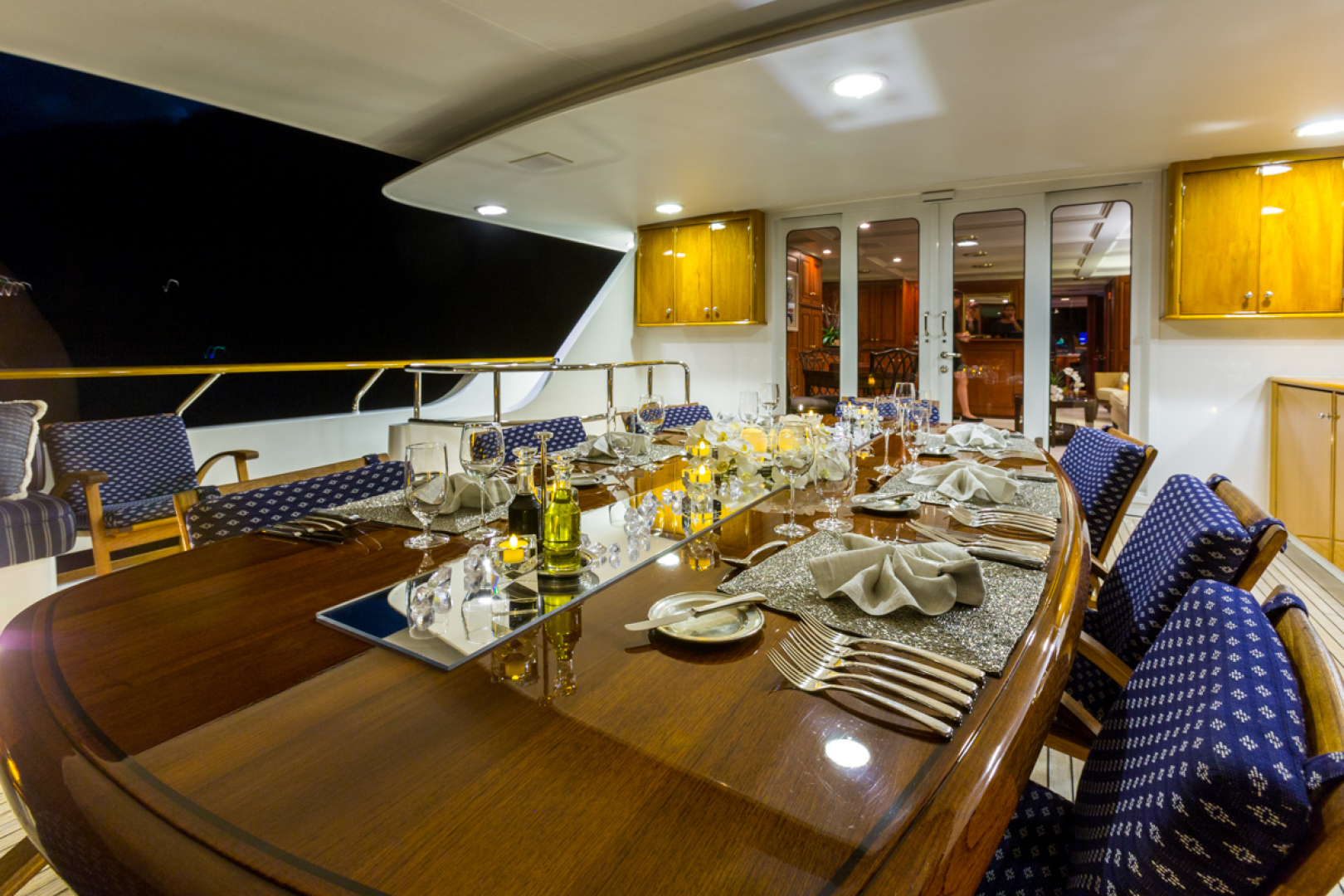 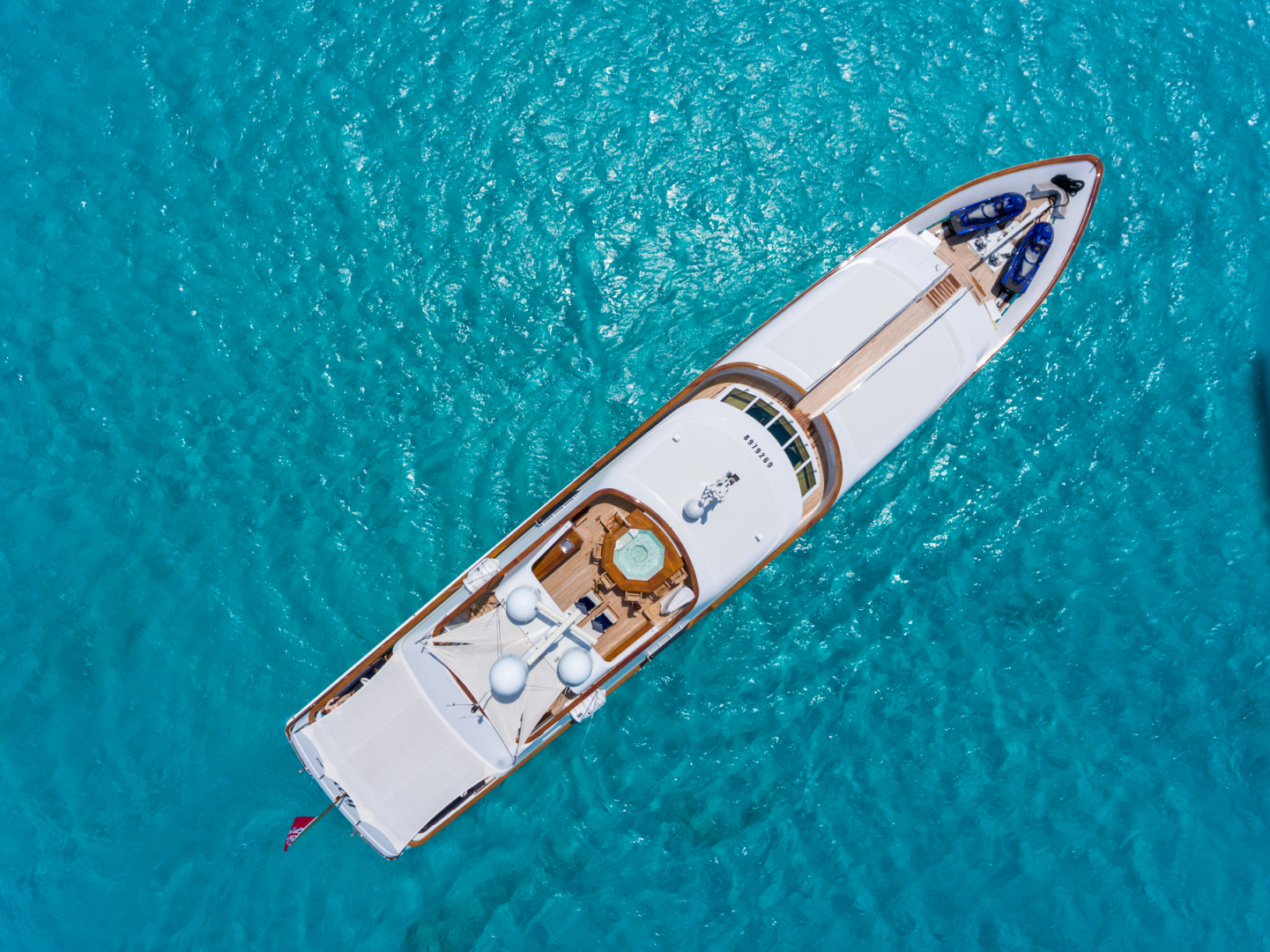 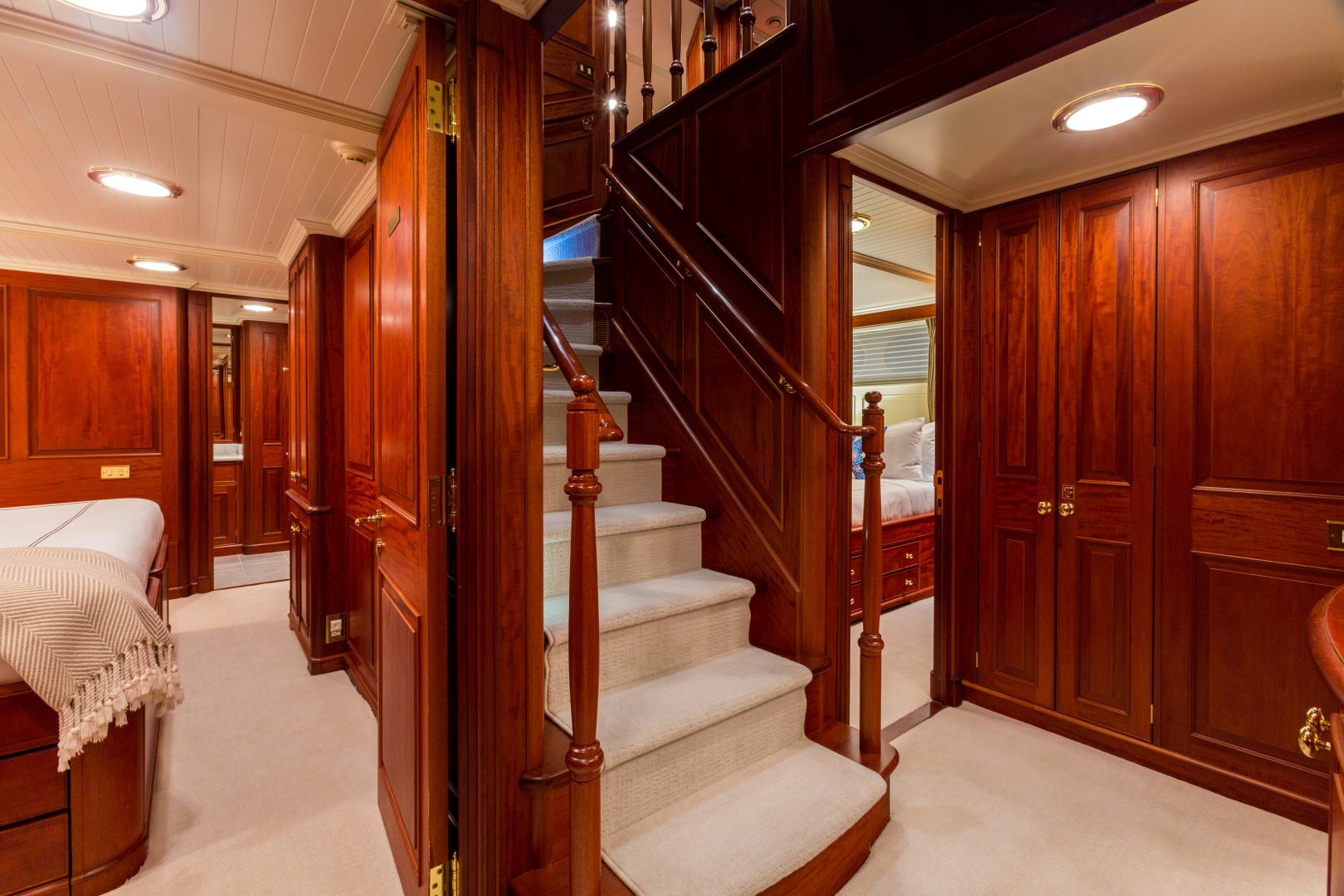 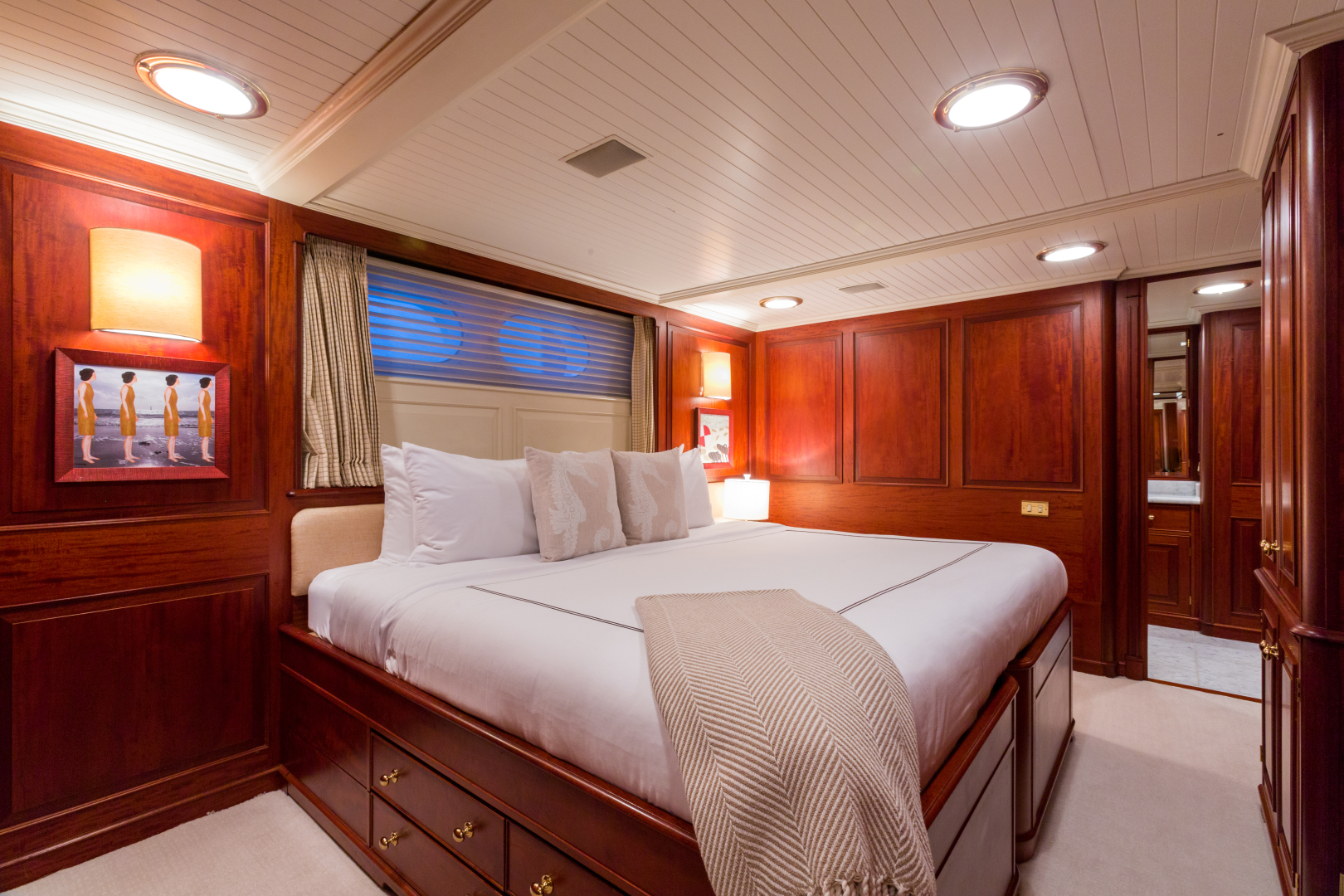 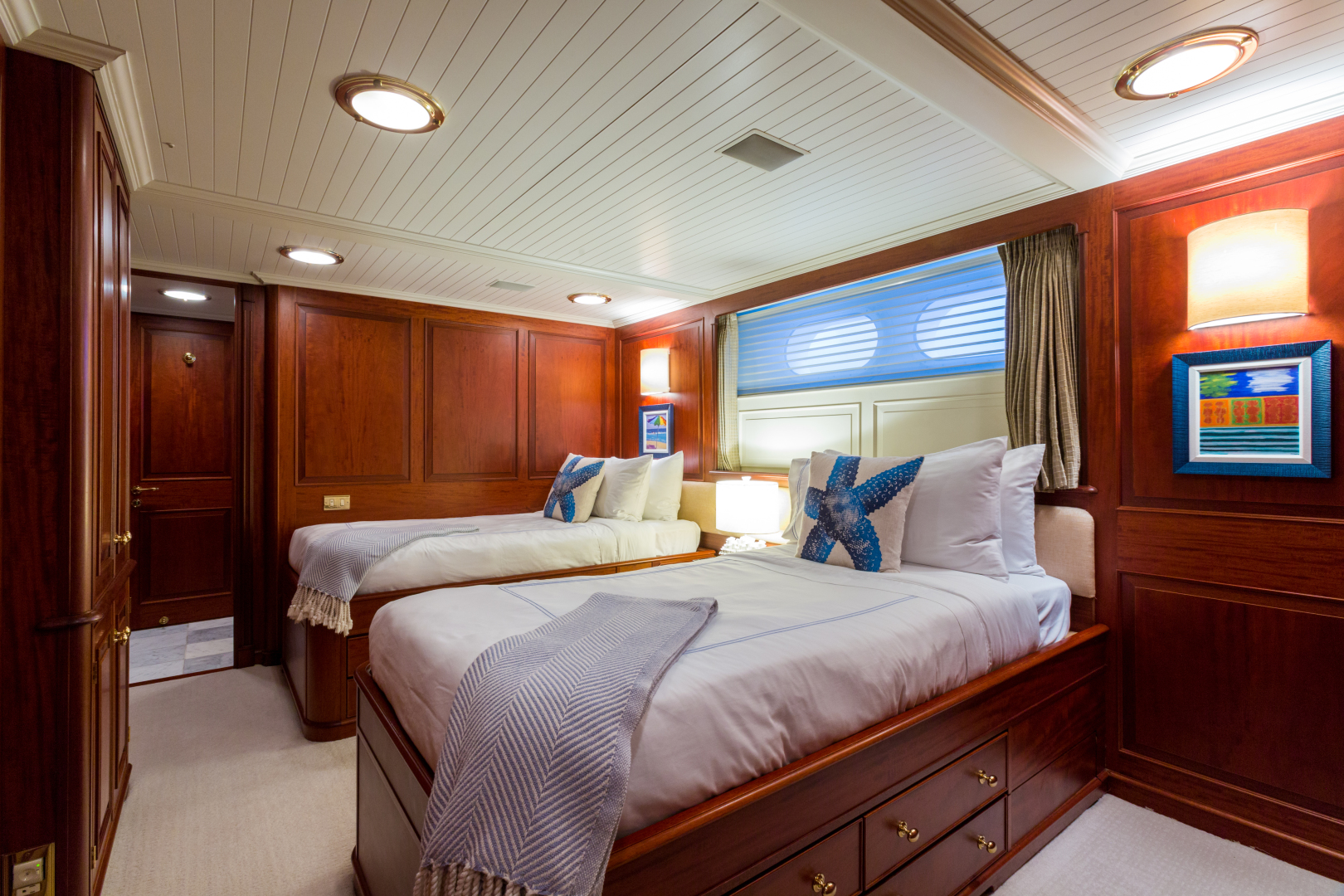 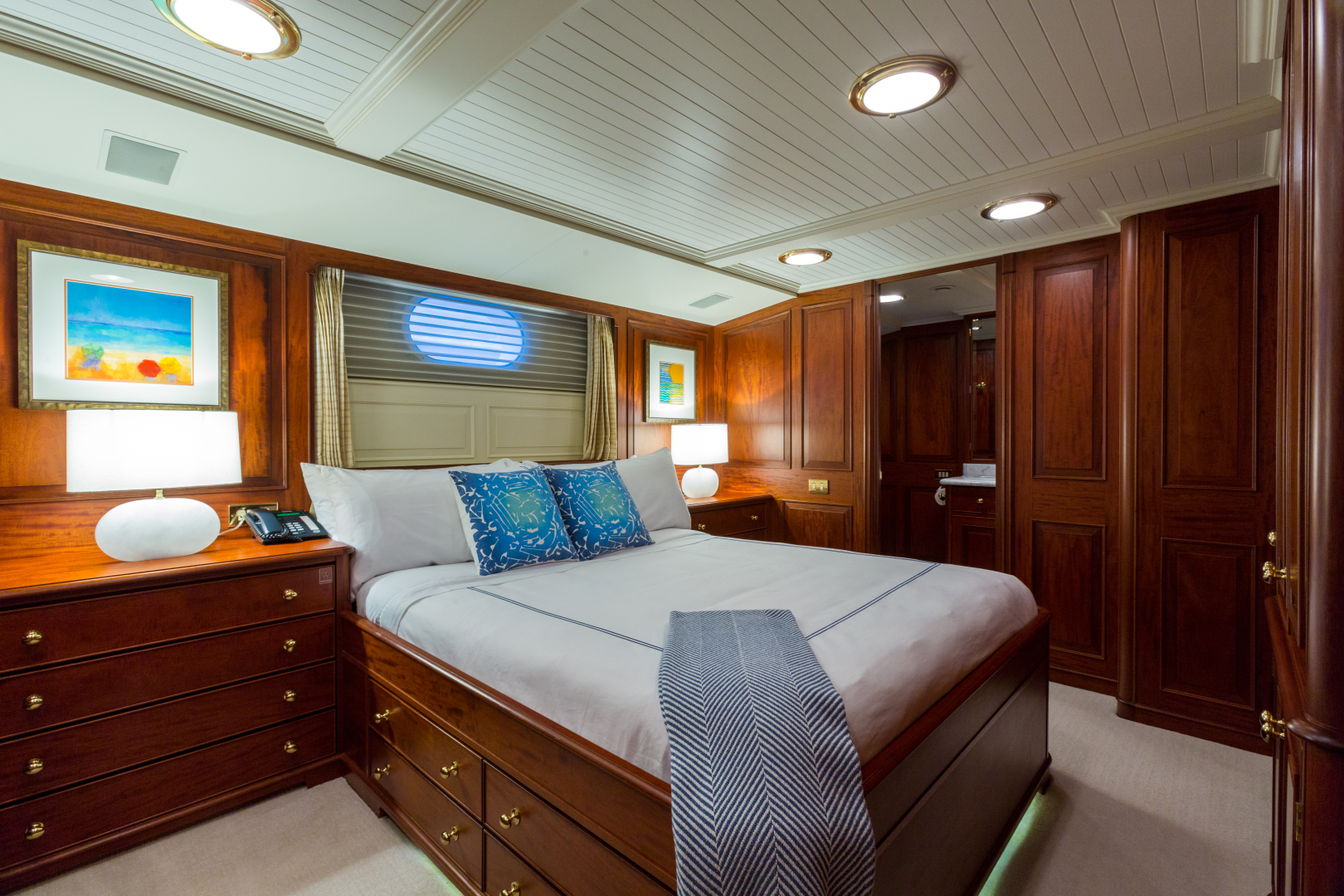 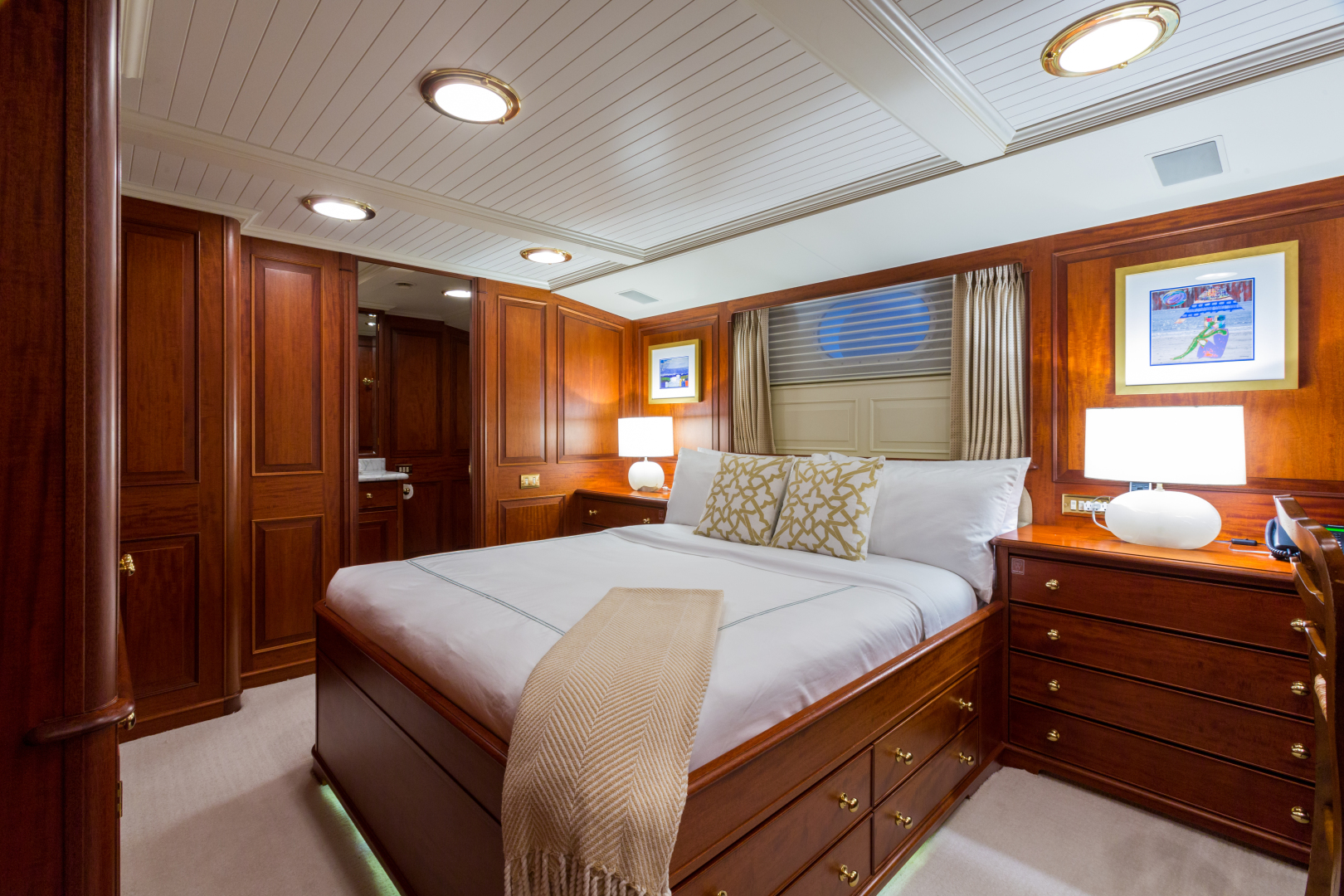 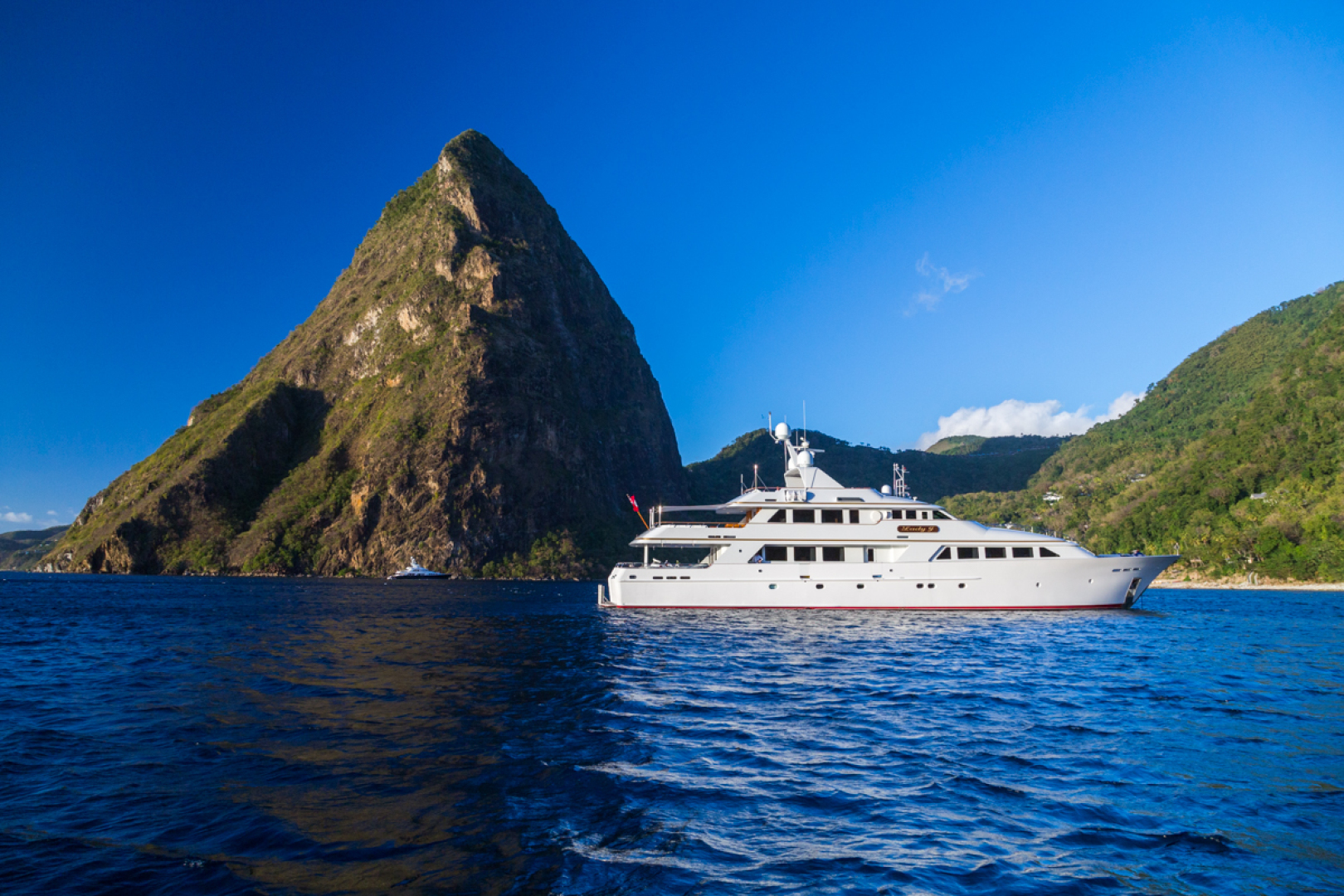 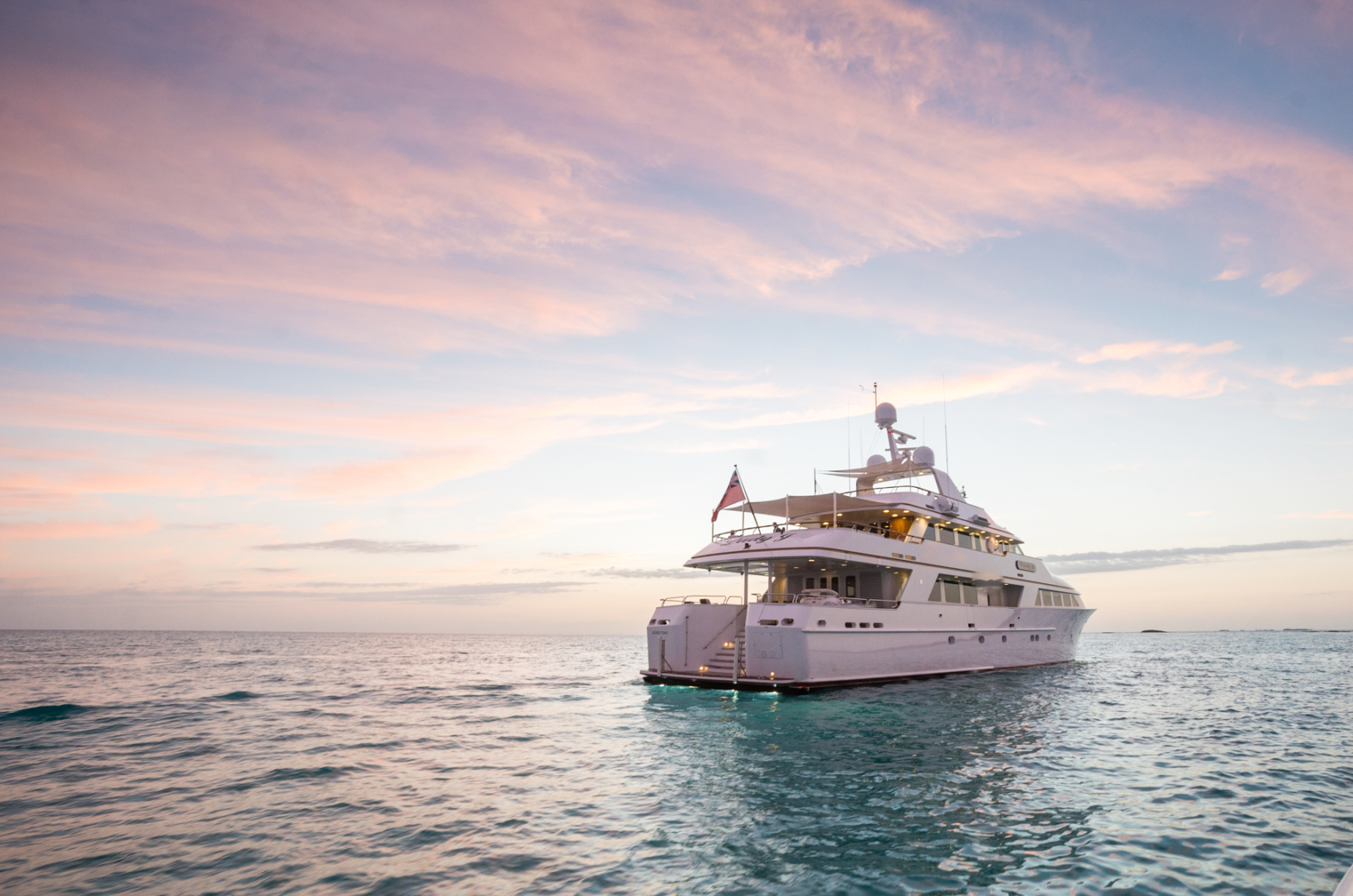 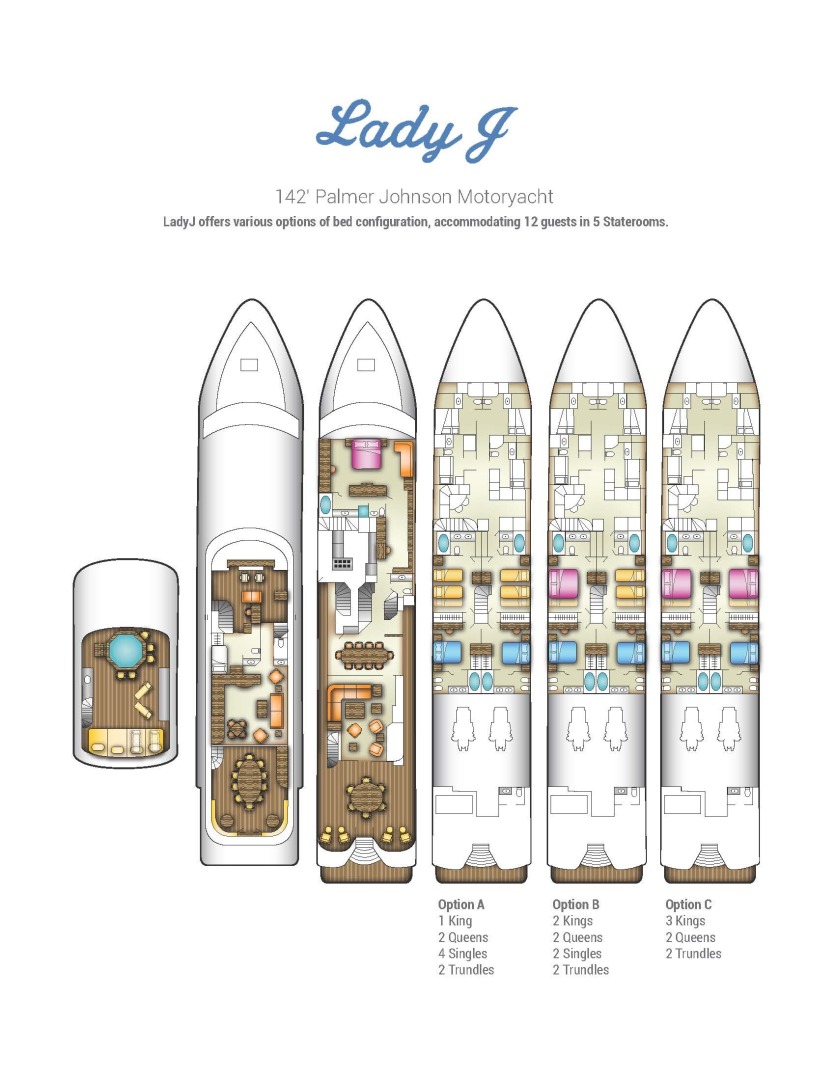 United Yacht Sales is pleased to assist you in the purchase of this vessel. This boat is centrally listed by Northrop and Johnson. It is offered as a convenience by this broker/dealer to its clients and is not intended to convey direct representation of a particular vessel

LADY J is in exceptionally good condition and boasts extensive upgrades and luxurious custom furnishings and fabrics with beautiful Cuban Mahogany raised paneling throughout. With classic styling inside and out, modern entertainment systems and an extensive assortment water toys, LADY J is the star of the charter fleet.

4. One of the best charter yachts in her class; large book of business ongoing for future revenue

6. 5 staterooms with master on the main deck

8. Consistently maintained and upgraded over the years

9. Shallow draft for easy cruising in the Bahamas

LADY J accommodates up to 12 guests in five staterooms. LADY J is configured with a king master stateroom, two queen staterooms, and two twin staterooms with trundles. For guest flexibility, the two twin staterooms are convertible to King-sized beds. Each stateroom boasts luxurious soft goods and linens. Every guest stateroom has a full entertainment system that includes flat screen TV/DVD/CD and IPOD connections, full time internet connection with WiFi, generous storage, and en-suite bathrooms, including a shower and tub.

The spacious and private master stateroom is full beam and located on the main deck. Upon entering through the owner's office to starboard one will find a desk, multiple hanging lockers and a small drinks refrigerator. Continuing forward through the private office, one reaches the master stateroom with king size bed, large sofa to starboard and her vanity to port. Additional hanging locker storage, a TV and entertainment system are found on the aft wall in front of the bed. His and her bathrooms have separate showers, separate toilet/bidet areas and a large Jacuzzi tub.

Down a beautiful spiral staircase is the marble guest foyer, leading to four well-appointed guest staterooms.

The forward guest staterooms are identical with twin berths and trundles, entertainment centers, hanging lockers, and ensuite heads with shower and bath. The starboard guest stateroom provides service access to the crew area. Each of these twin staterooms are easily converted to King-sized beds to accommodate a wider variety of guest needs.

Hull, superstructure, tanks and rub rail are constructed of aluminum alloy. The beautiful teak decks have all been replaced under the current ownership.

STEERING: Pilothouse and both wing stations

Air Handlers in each section of the vessel

GPS for navigation equipment and phones

Galley remodel- including all new appliances

Air Conditioning compressors, duct work and some of the air handlers were replaced.

Extensive upgrades in a number of areas including new interior/ exterior upholstery, bedspreads/ linens, furniture, large screen TV in the salon, dinnerware, stemware, etc. New additions also include a wet bar and a game table in the skylounge. New VSAT installed. A dining table for 10 on the main aft deck along with the 4 x wicker chairs with ottomans. 2 x lounges added to the sun deck. A crane was installed on the bow where the 2 new wave runners are stowed, leaving all decks clear for guest use.

LADY J was always one of the best boats to ever come out of the world renowned Palmer Johnson Yard. She has an enduring interior and has been continually upgraded. The biggest upgrade recently was the new Caterpillar C32 engines and ZF transmissions, but the overall maintenance schedule has assured that LADY J is always ready for her owner or charter guests to enjoy.

LADY J is US built.

A complete list of exclusions is available upon request. 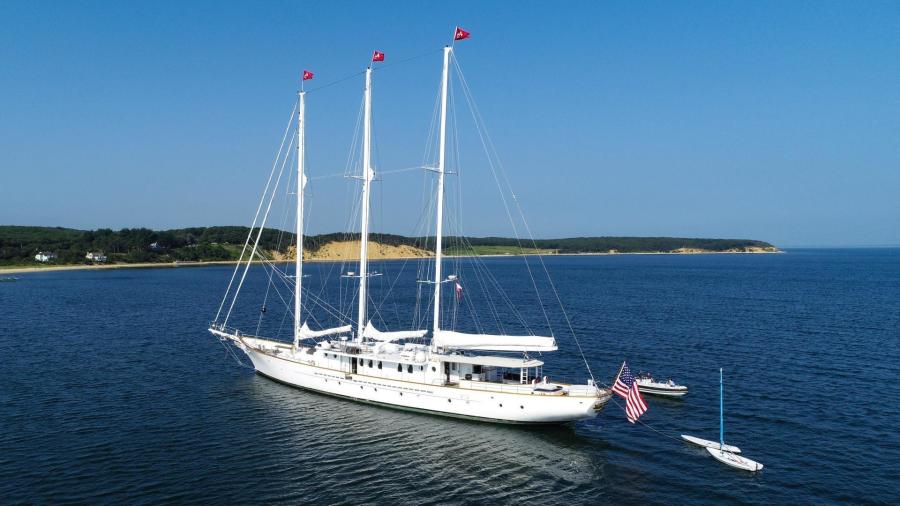 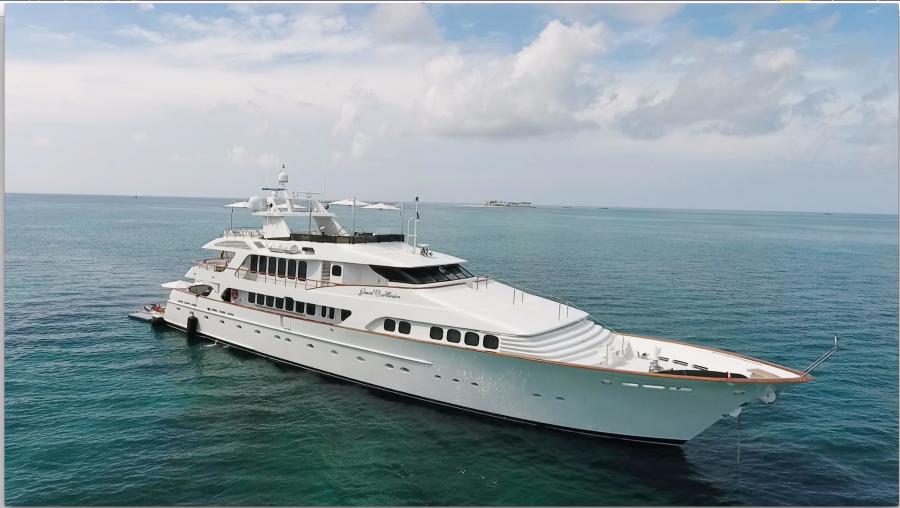 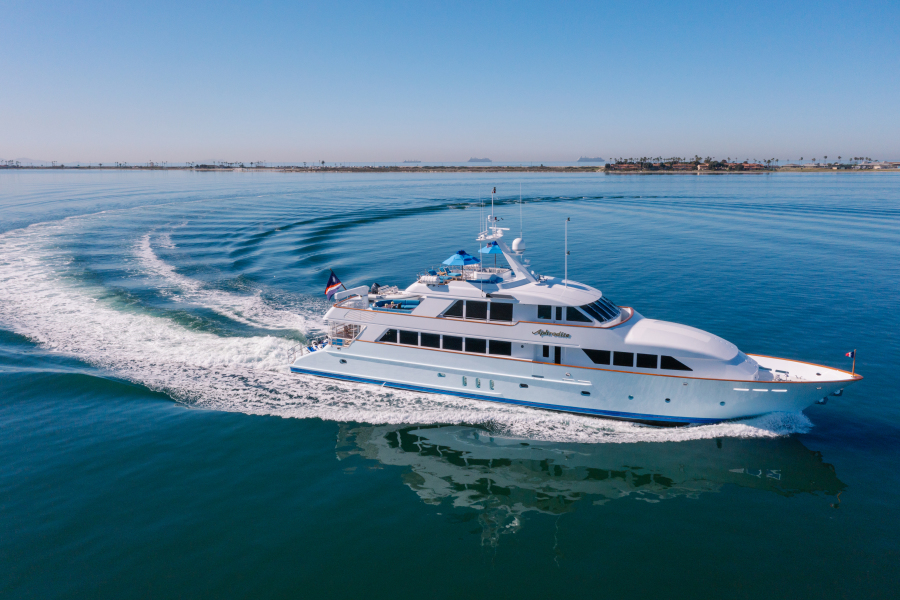