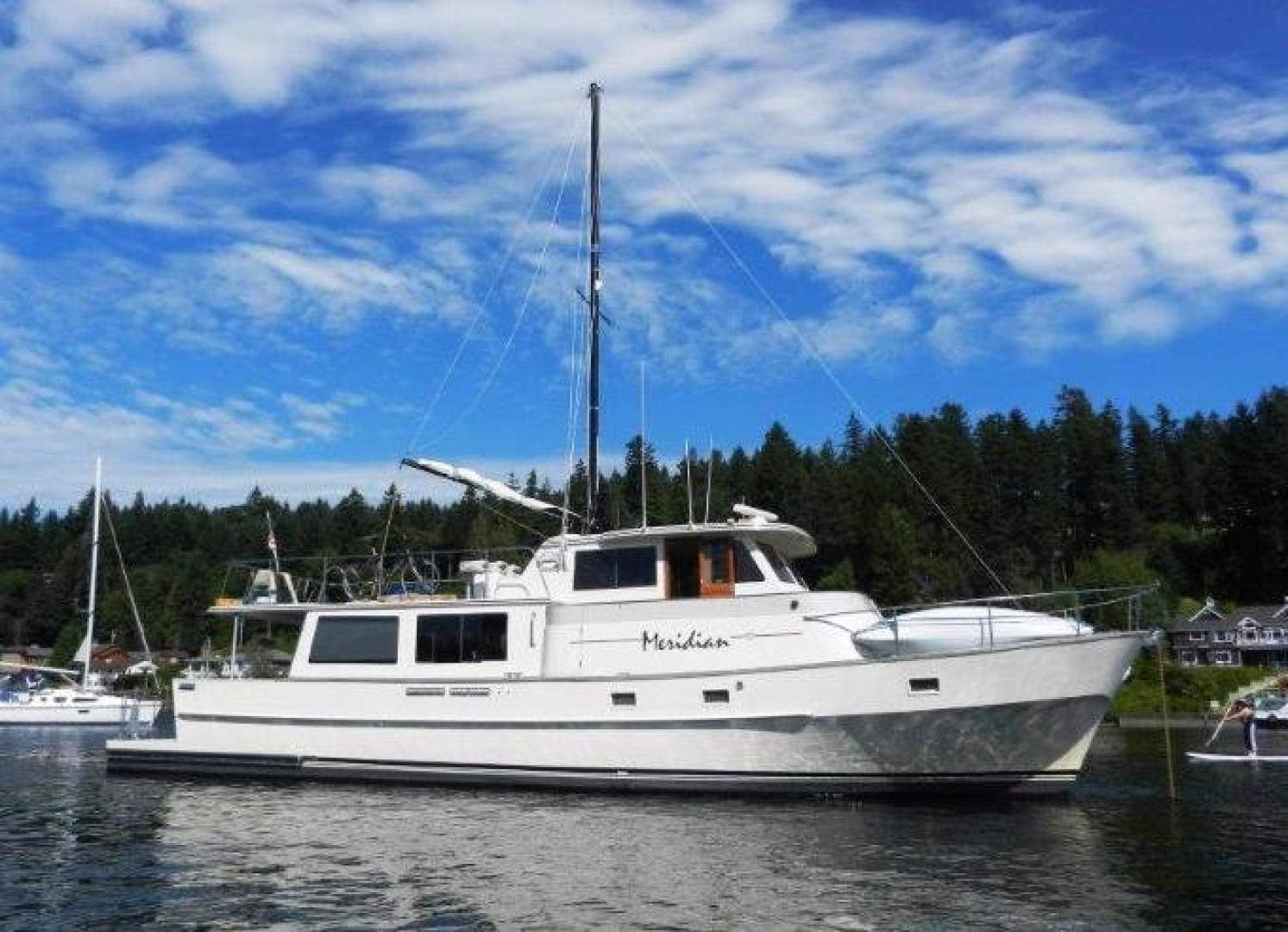 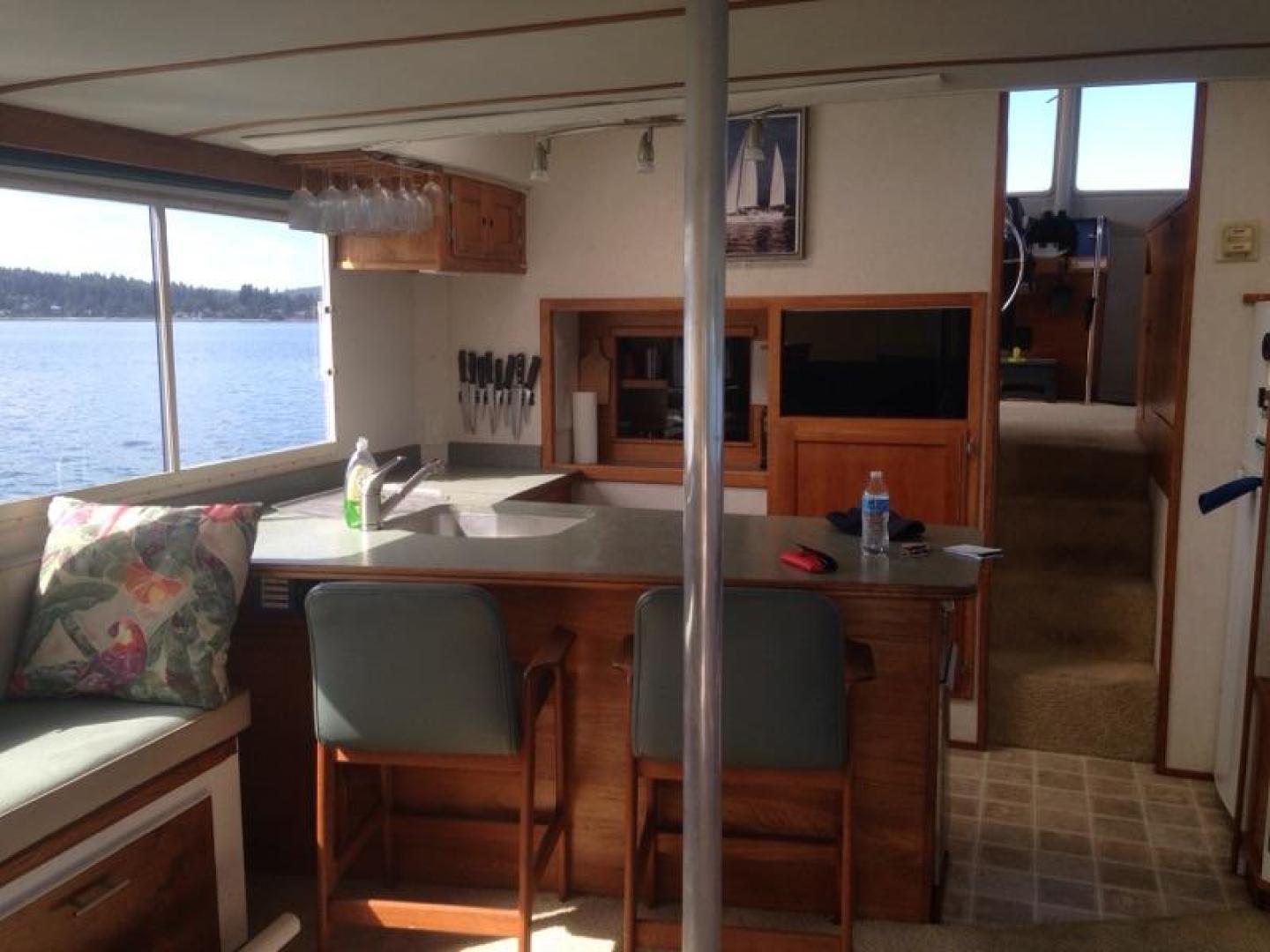 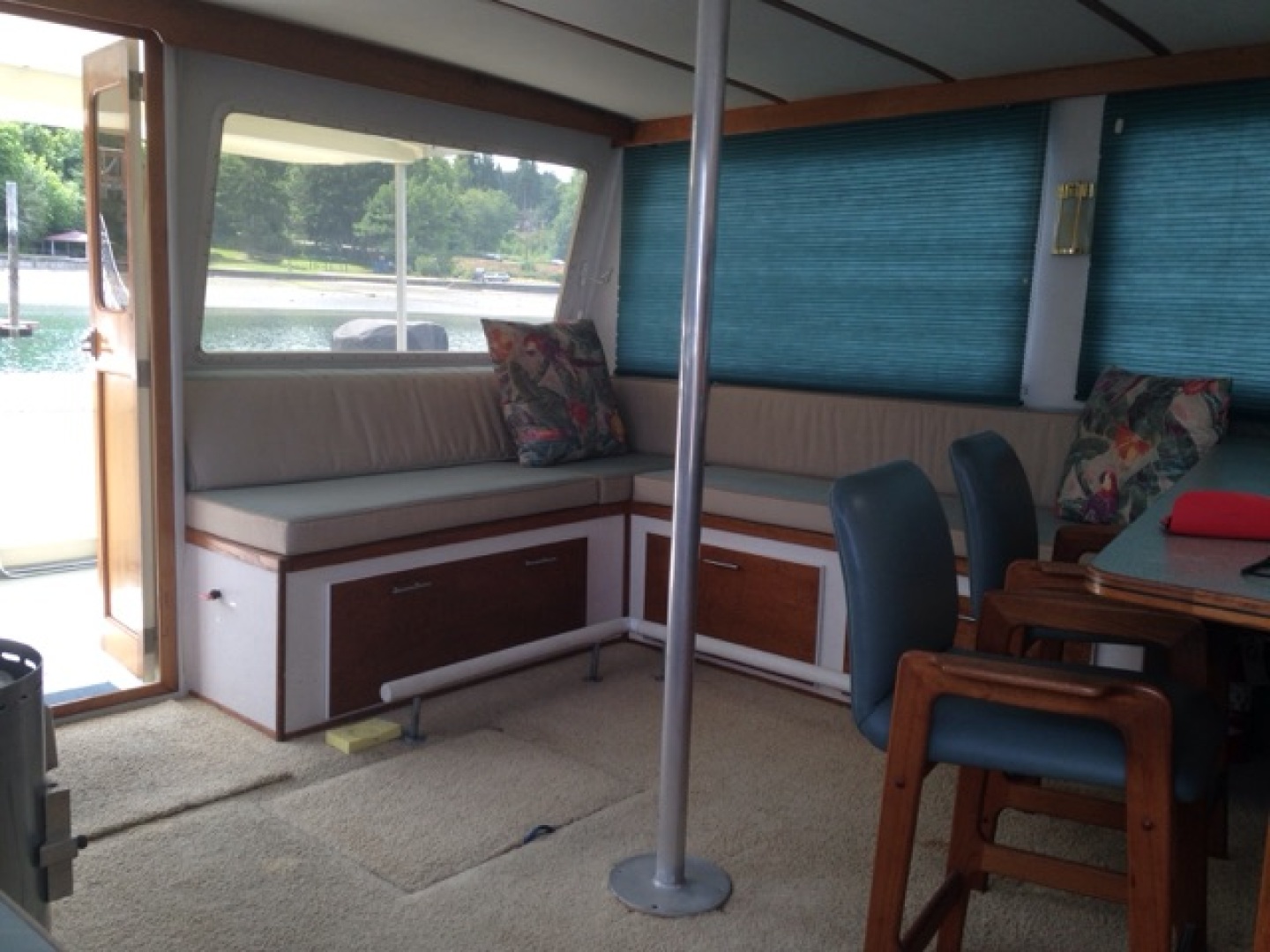 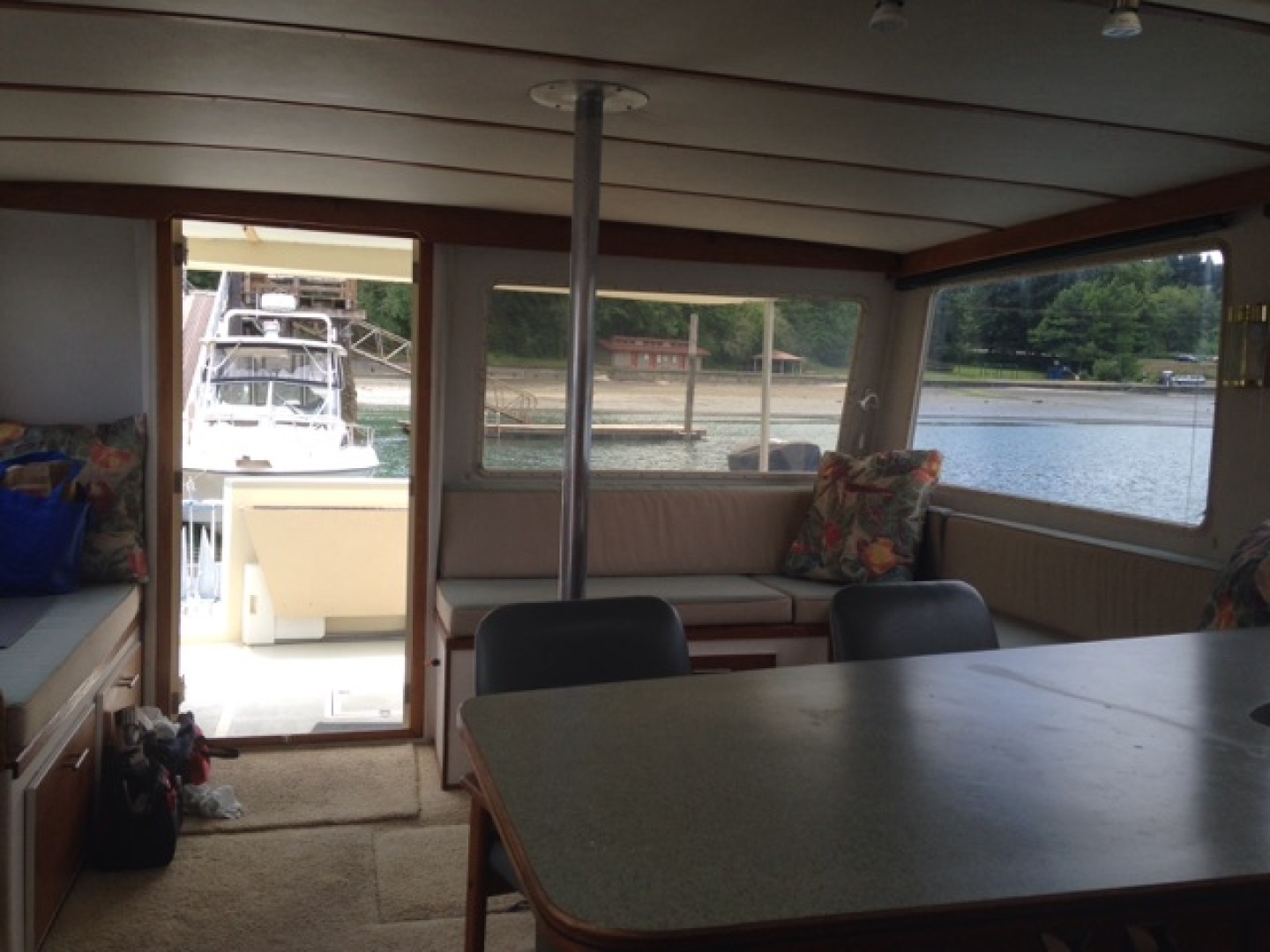 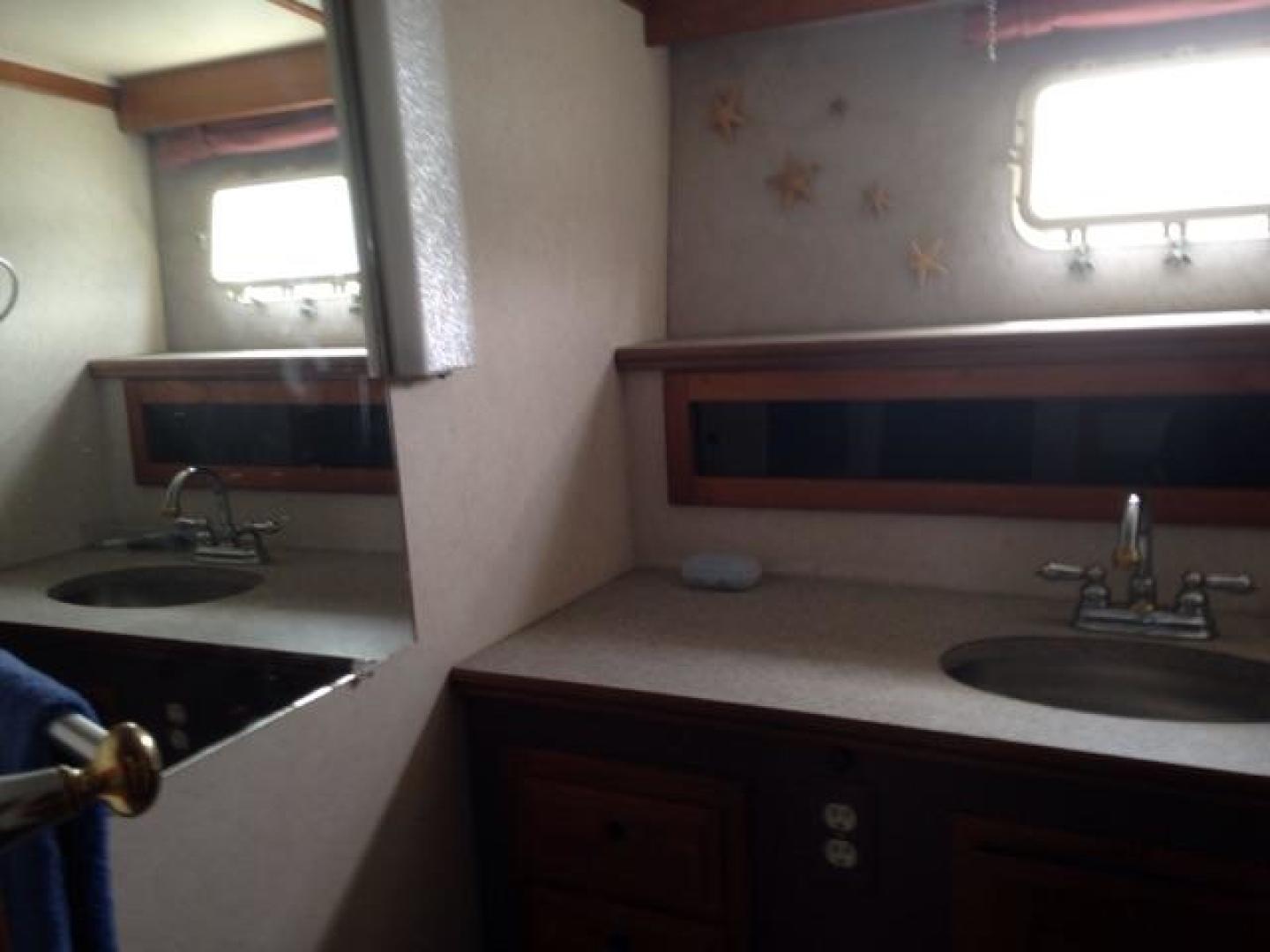 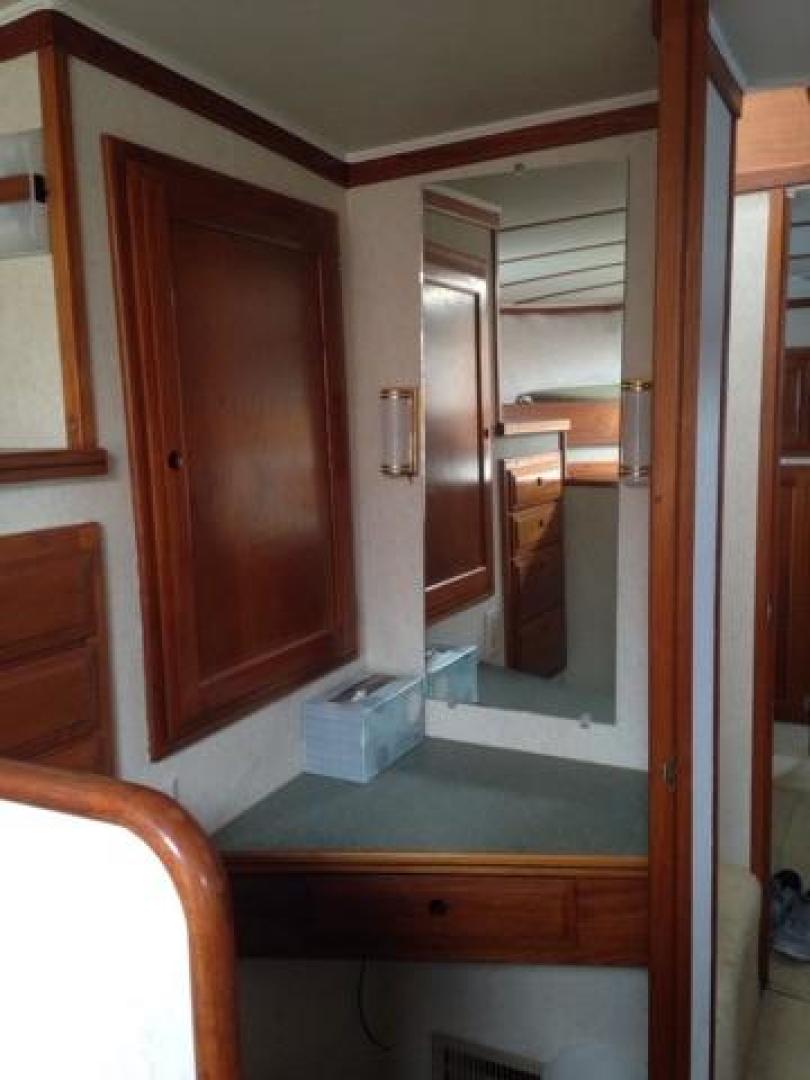 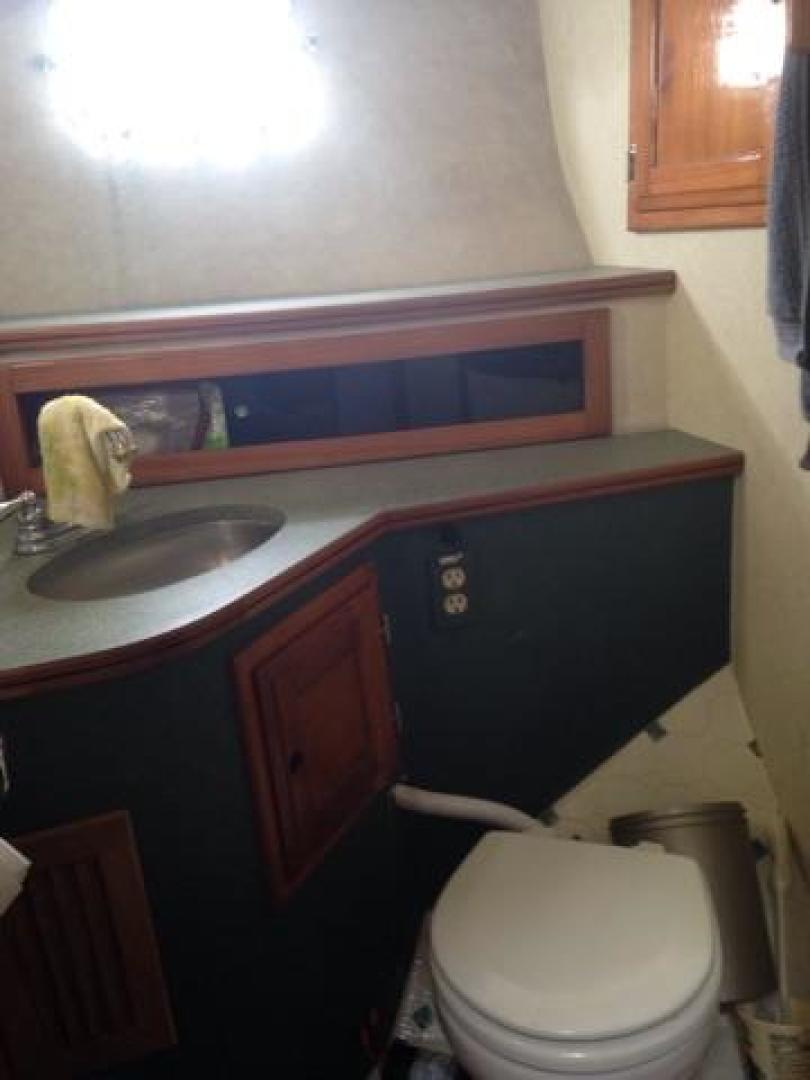 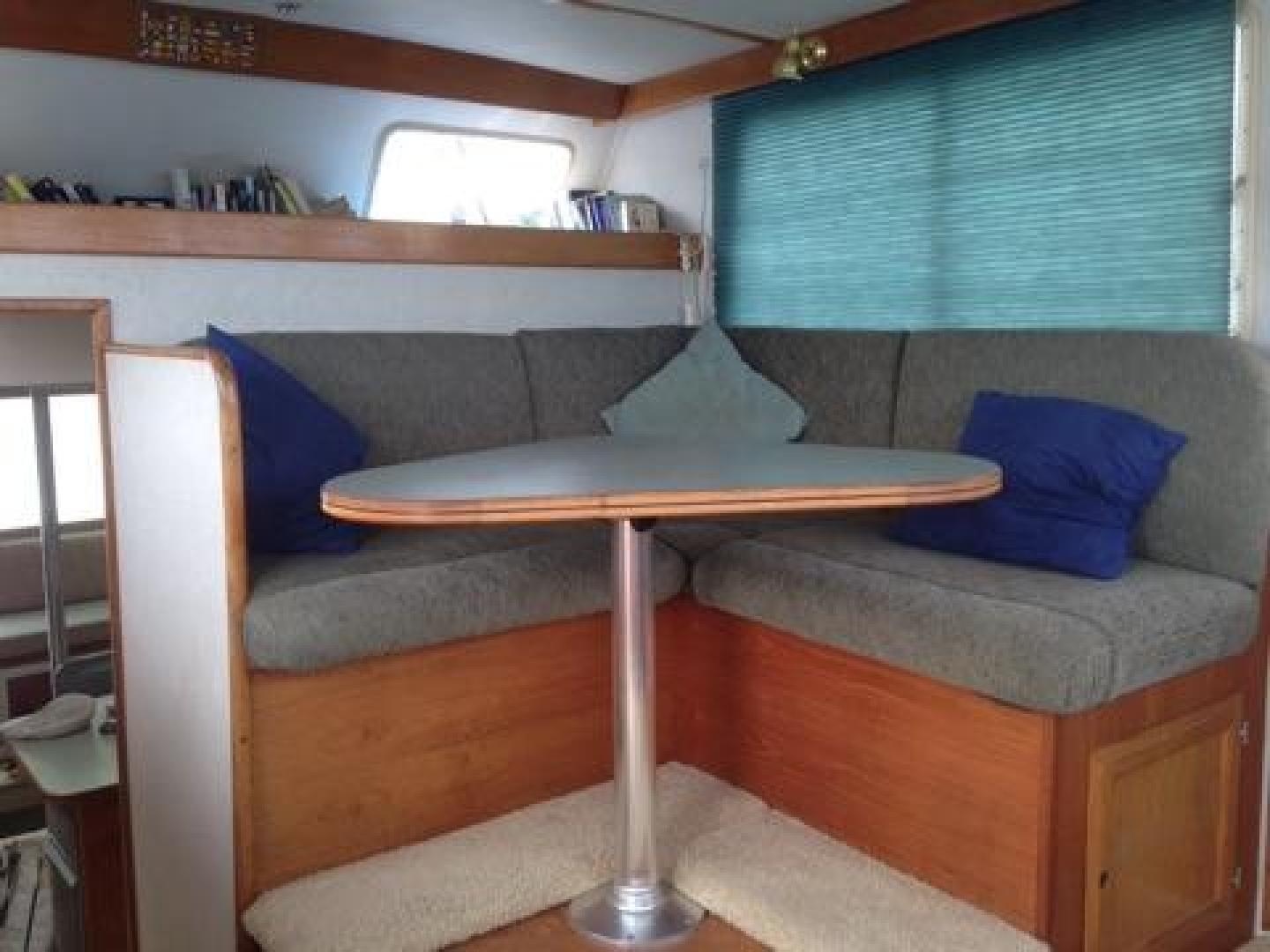 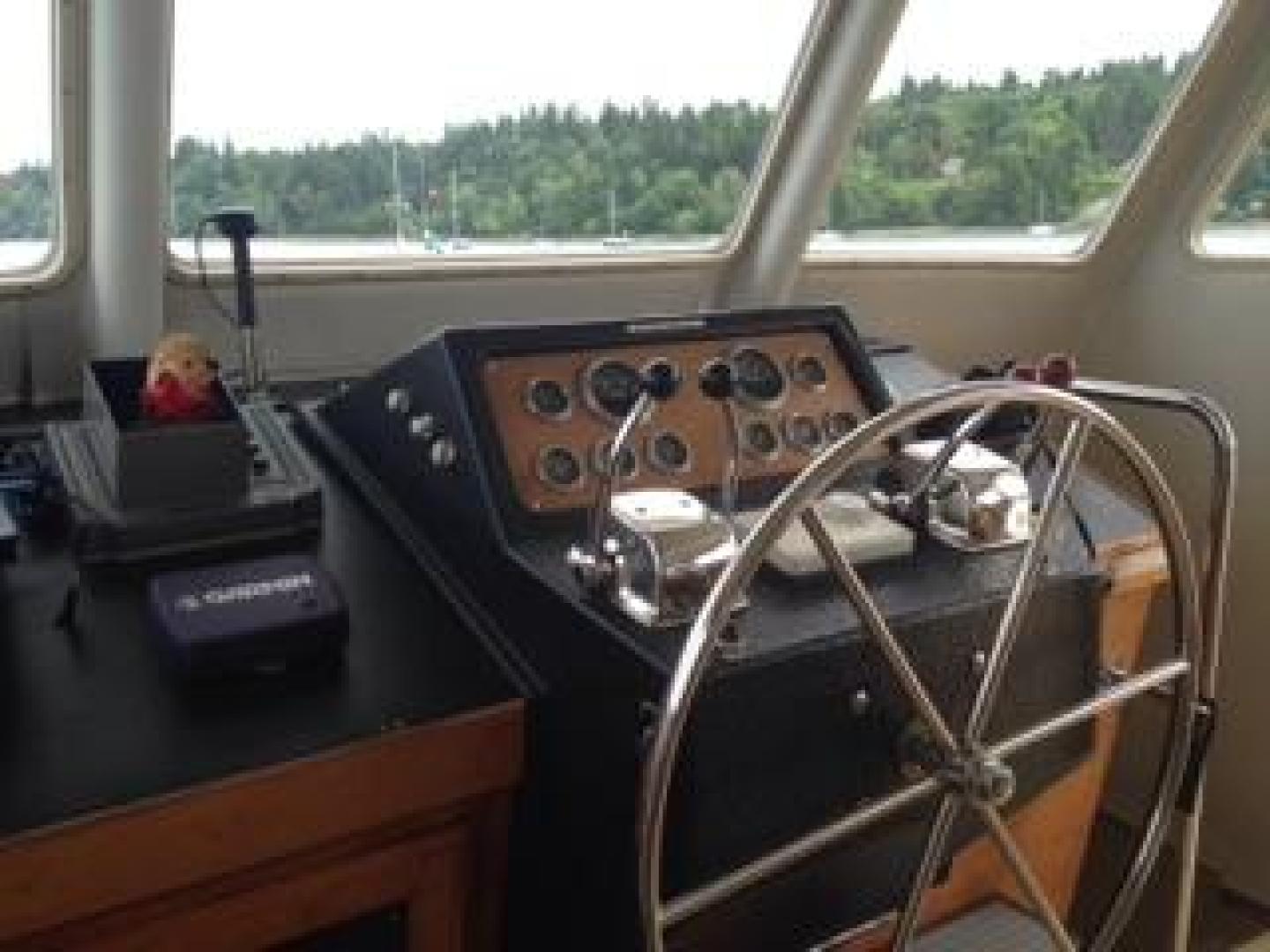 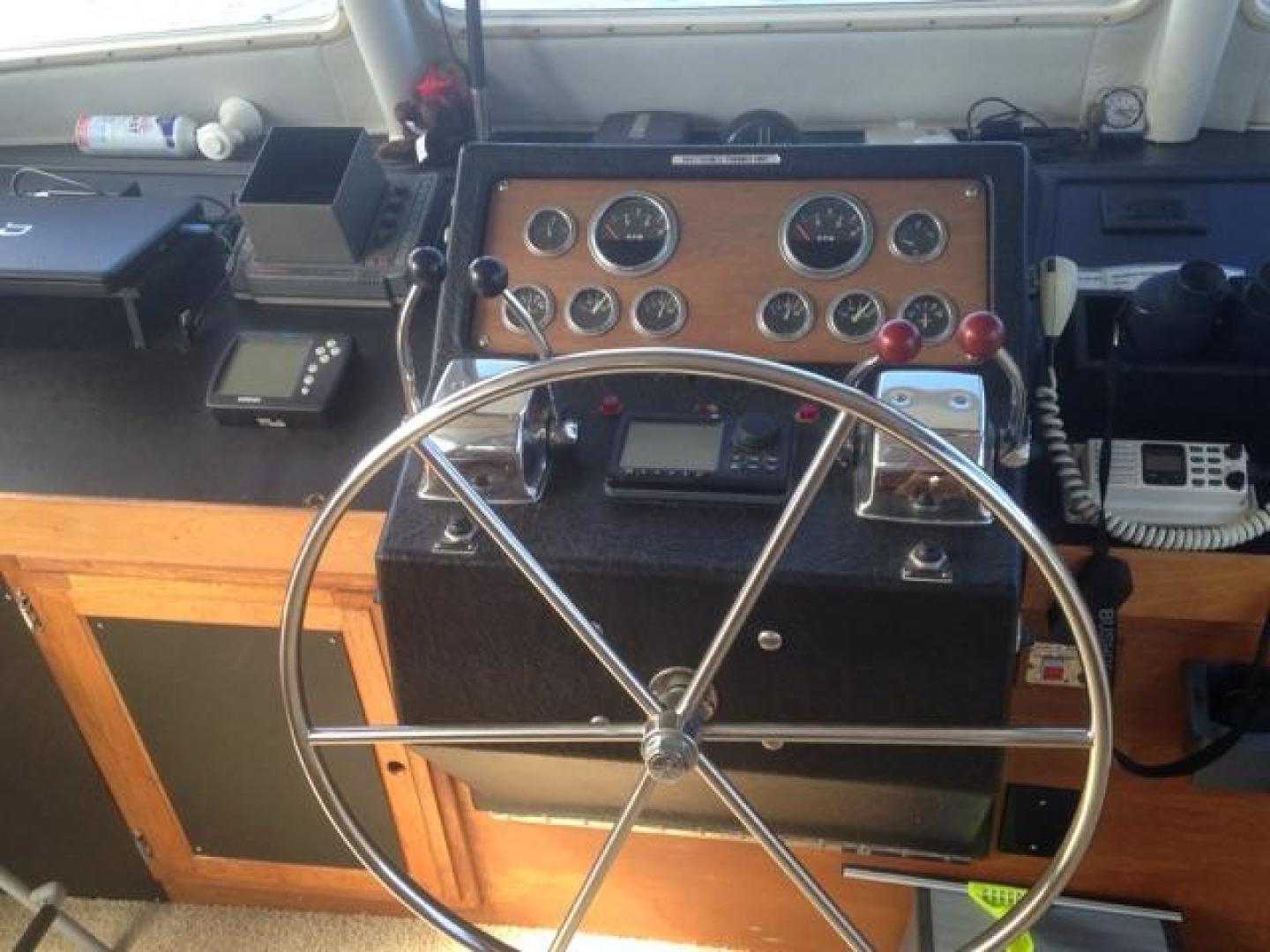 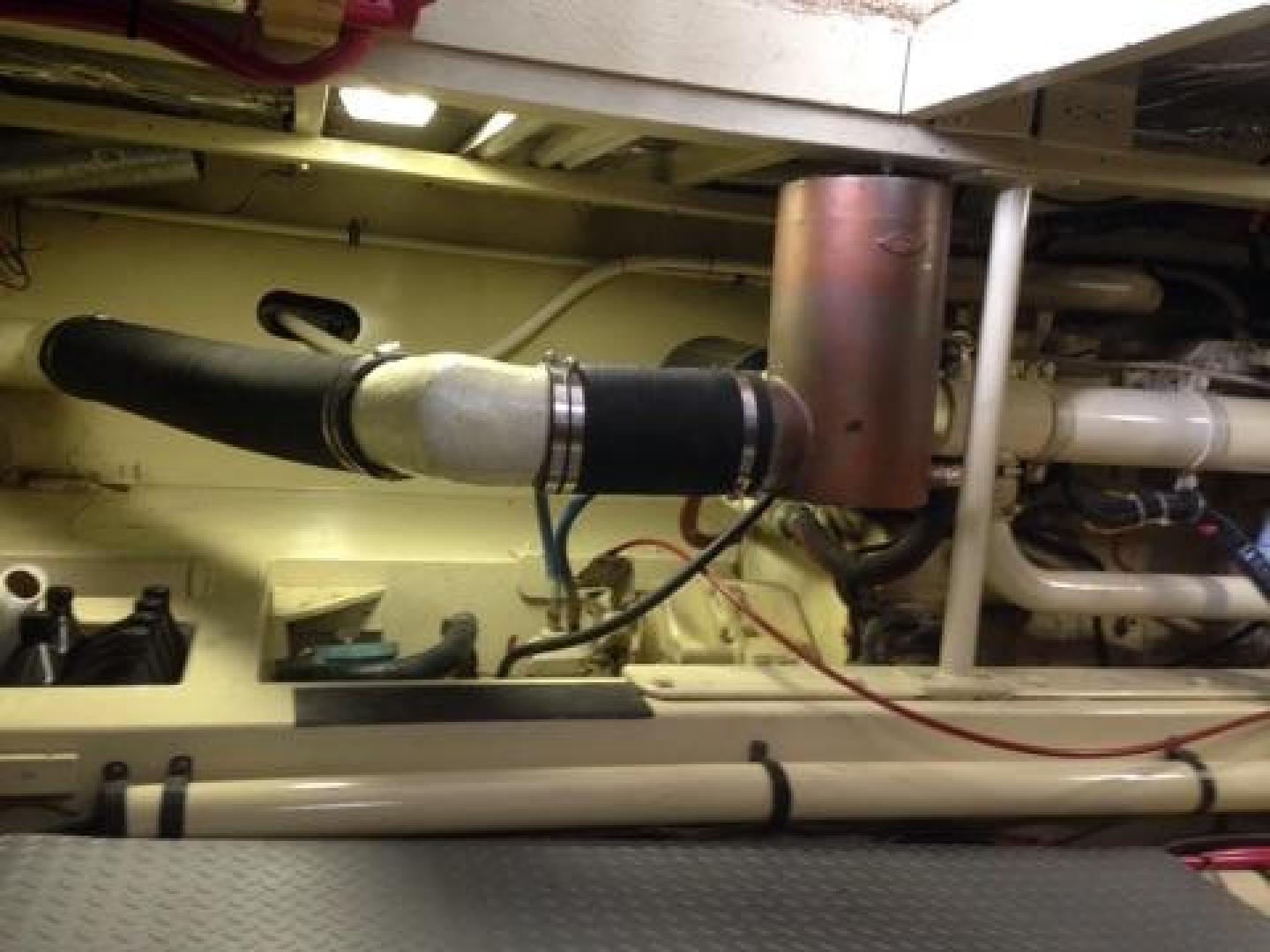 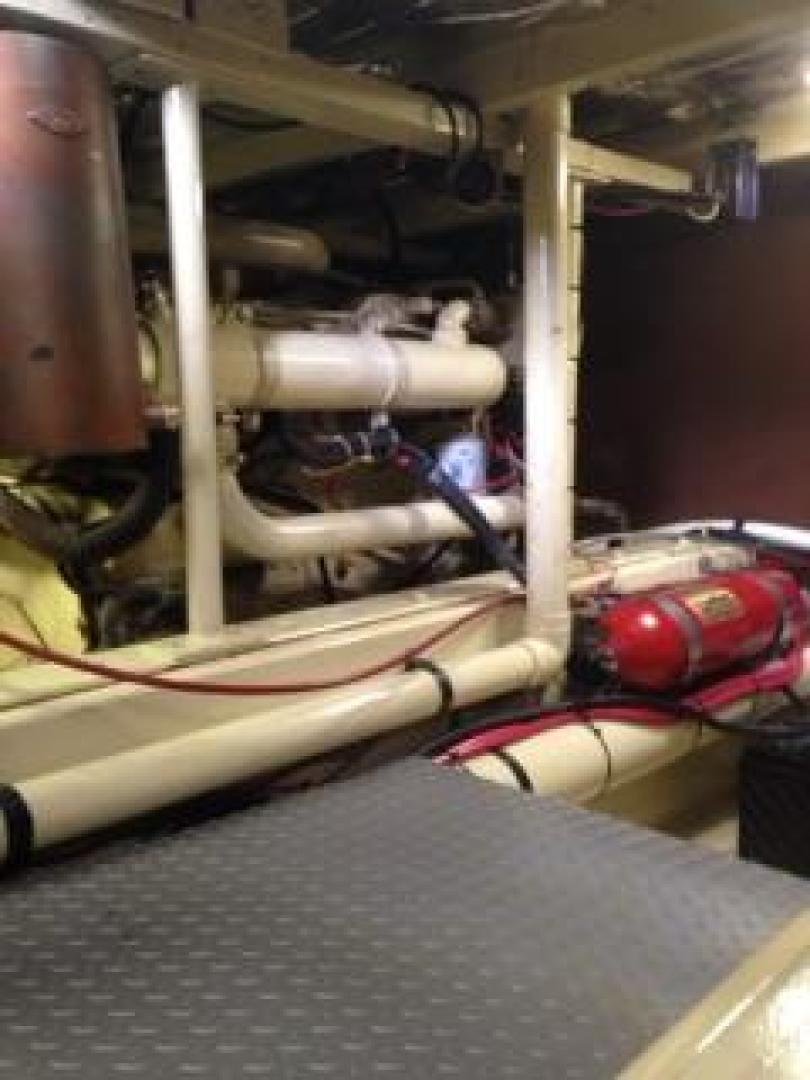 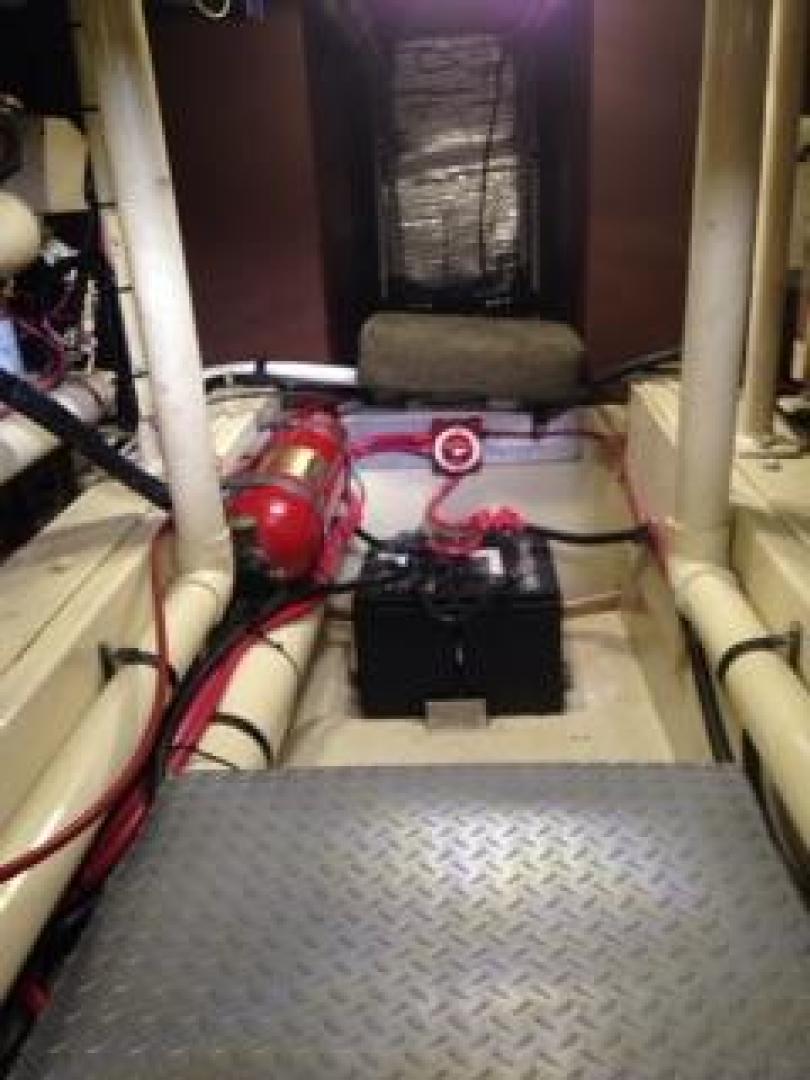 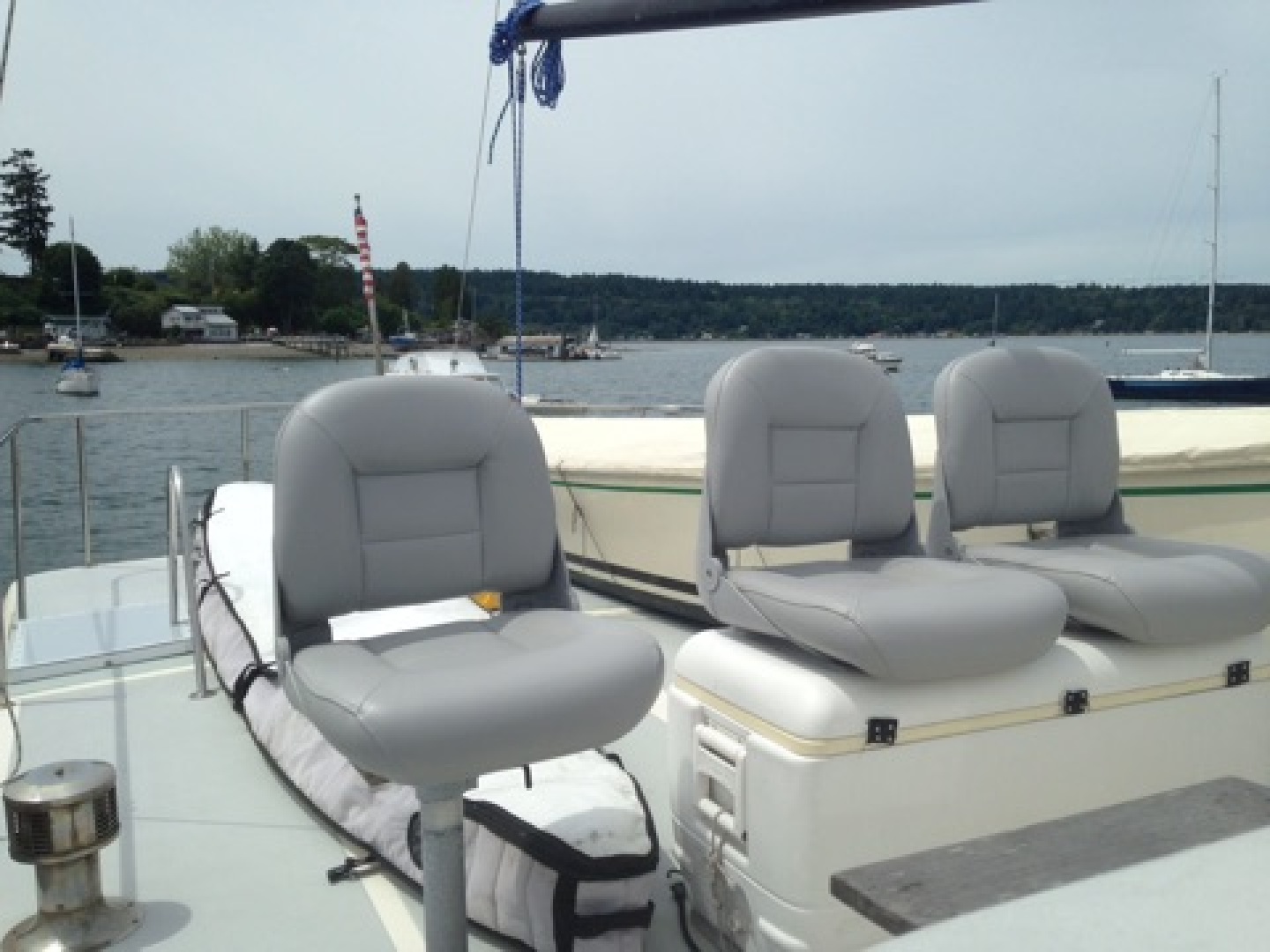 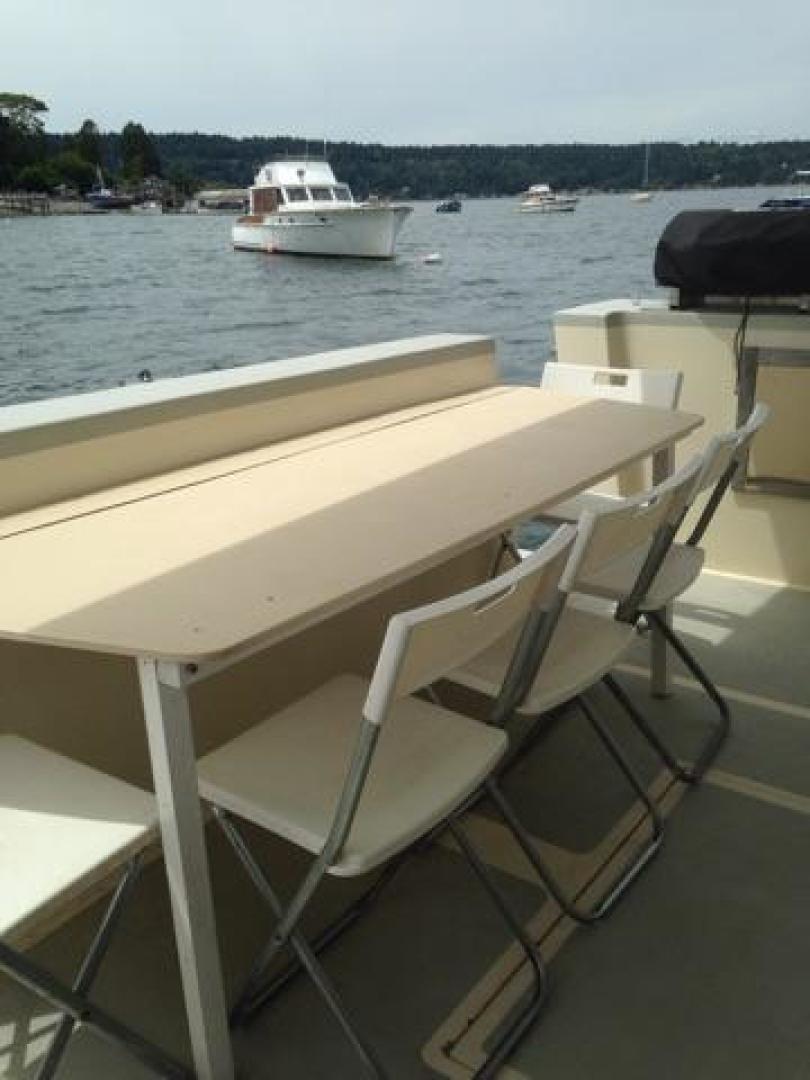 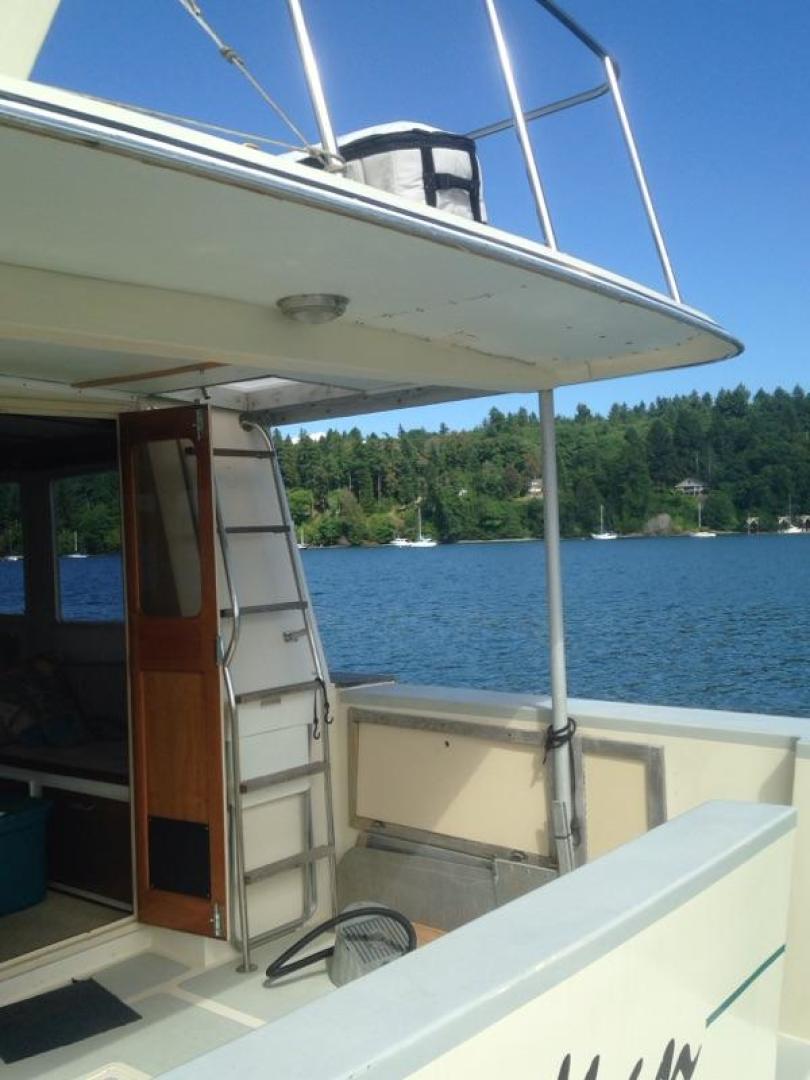 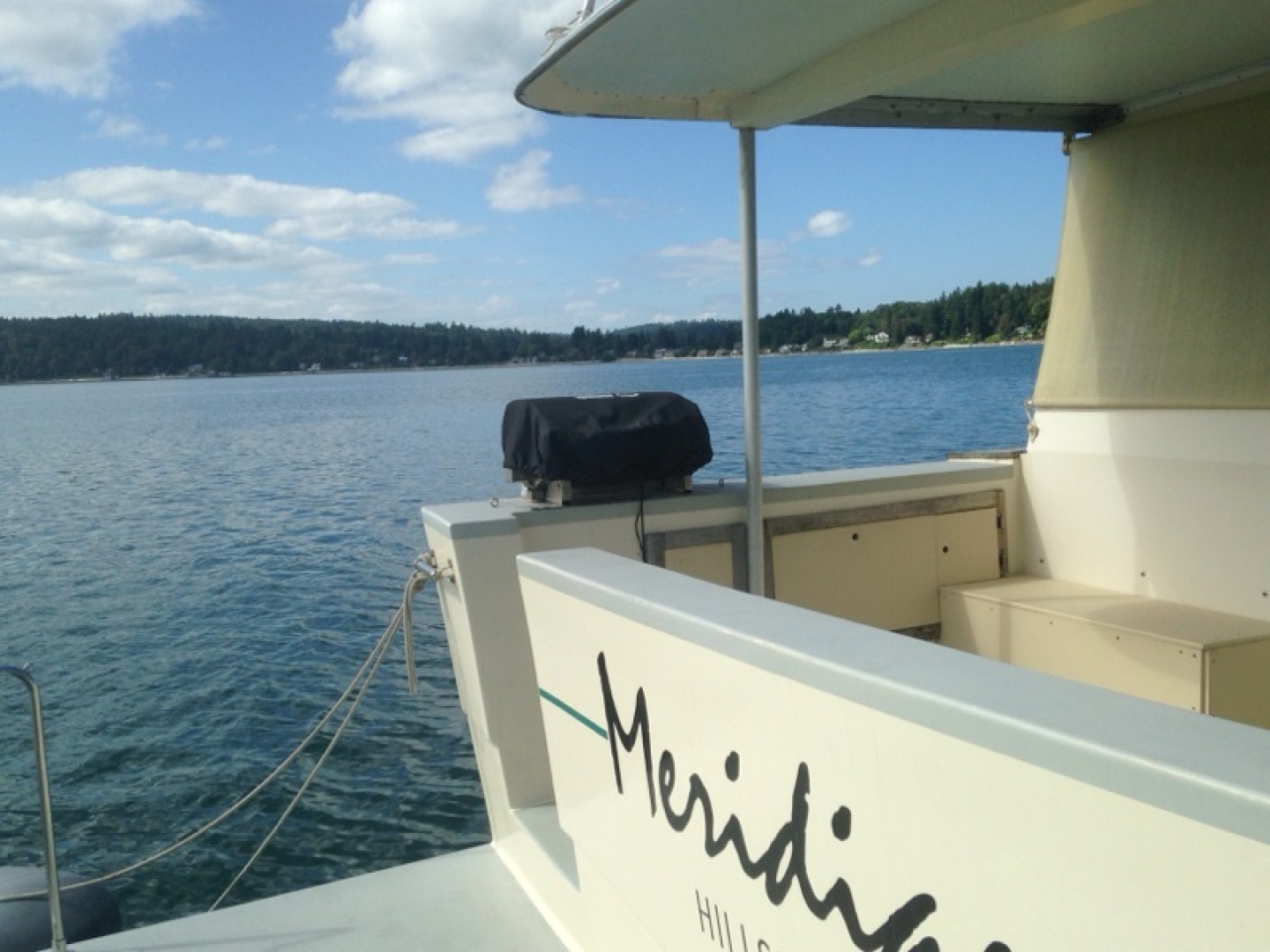 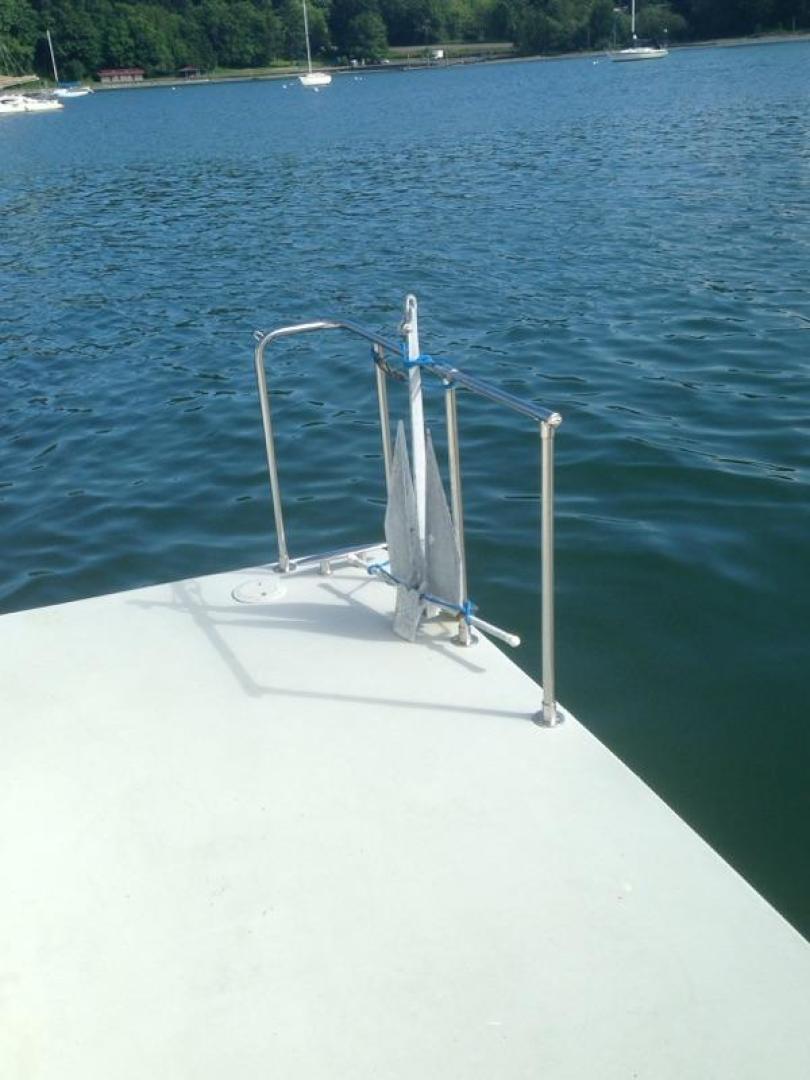 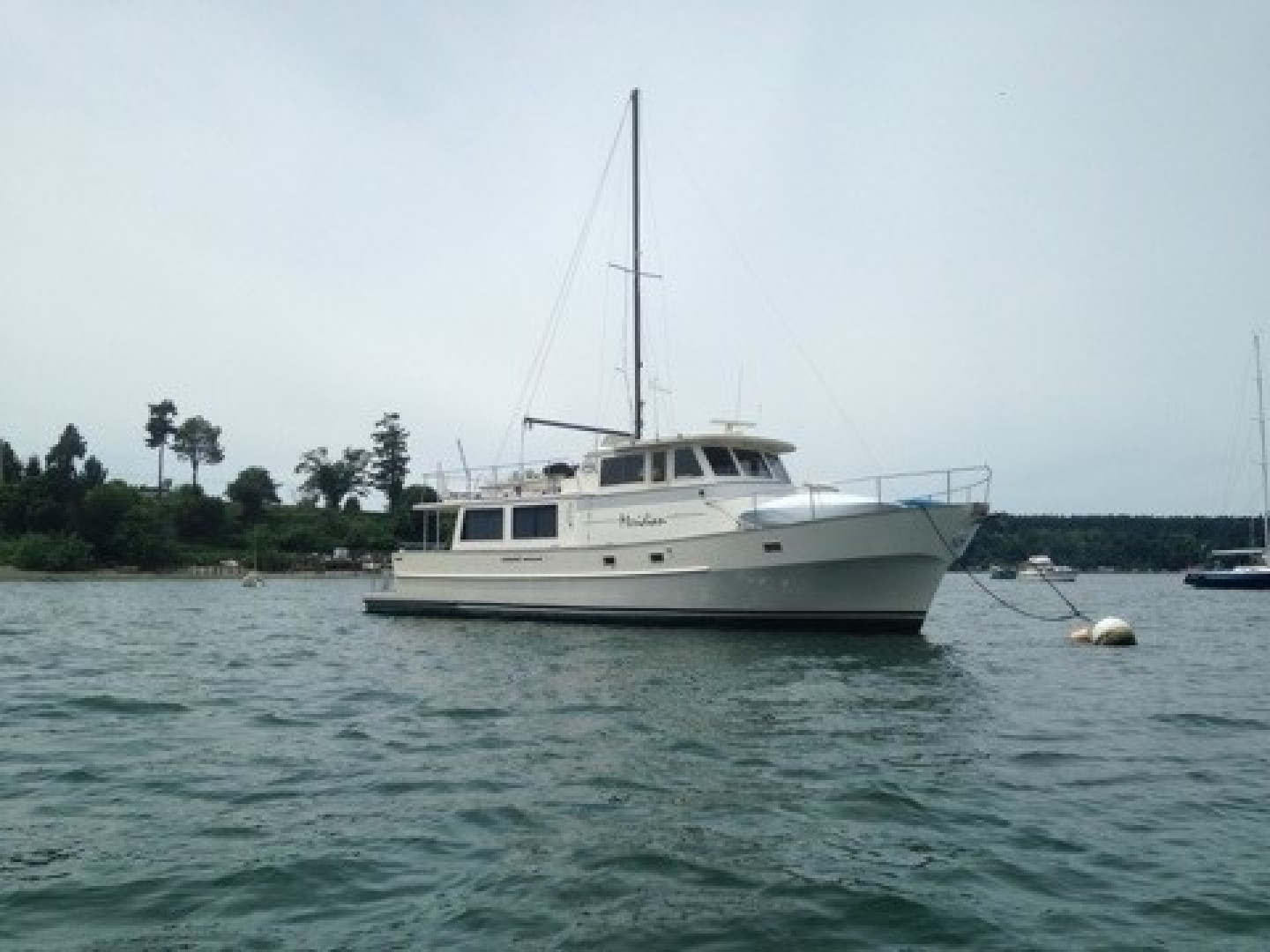 Meridian is a large, functional, efficient trawler, designed for the lowest possible maintenance, available at a modest price. It is an excellent family cruiser and has spent 8 trouble free years cruising the waters of the Salish Sea between Olympia and Desolation Sound in comfort and safety each summer for 4 to 5 months. The boat has accommodated three couples easily, and at times as many as three couples and five kids for three weeks. There is lots of deck space and room to store toys – including the 2 kayaks, paddle board, 16-foot sailing dinghy and 13-foot tender which she currently carries.


United Yacht Sales is pleased to assist you in the purchase of this vessel. This boat is centrally listed by All Ocean Yachts. It is offered as a convenience by this broker/dealer to its clients and is not intended to convey direct representation of a particular vessel

Meridian started out life in 1974 as a raised pilothouse Meridian 48, one of 17 built by the old Meridian company in Costa Mesa, before production boatbuilding moved to the east coast and finally to Taiwan. These boats have a large volume, virtually full beam salon. There are two separate cabins each with its own head and separate shower – a master cabin midships and a large fore cabin that can accommodate two adults in a big V berth and two kids. There is a large galley and a 7 foot by 13-foot cockpit. The hulls were very well built and there are no blisters after 45 years of service. Meridian is an excellent family boat, not a fine yacht. She is very functional, and designed to require as little maintenance as possible. The owner has done all the refits and maintenance work himself.

I bought the boat in 2011 in the Tacoma area, and proceeded to rebuild, refit, re-equip and extend it over the next 5 years. I have cruised it every year between Olympia and Desolation Sound and the Broughtons, BC, between mid-May and mid-October each year. The remainder of the time (7 months each year) it is hauled out, plugged in and has a heater in the engine room. So, no mold. I have averaged about 220 hours each year in the 5 months it is in the water on the twin Cummins 5.9’s, each 250hp, which were installed in 1992. They have about 3000 hours on them at present.

The owner is a very experienced professional in the Marine Industry with a company called Marine Construction Services, which has operated since 1992 in FL, WA and Hong Kong, and is in the business of project management of large yacht construction for wealthy clients world-wide. We have completed 12 newbuilds in that time, most around 150 to 180 feet LOA. Six of these were at Delta Marine in Seattle in fiberglass. the rest elsewhere in the world in glass, steel and aluminum as well as numerous refits. The owner has a 500-ton captain’s license, and operated both sail and motor yachts world-wide for 14 years. He also has a PhD, and some engineering and naval architect training and does surveys world-wide for owners, banks, insurance companies and Flag States. He has also built several boats for himself from scratch including a 64-foot aluminum ketch, and has most of the required boatbuilding, mechanical and electrical skills.

The major changes were done in response to the initial stability survey While the boat as built was safe, it had too much weight aloft.

1. In response, the flybridge was removed and the pilothouse roof strengthened with 2” balsa core and several layers of glass using vinylester resins. A windshield and three helm seats were installed at the forward end of the boat deck. A steel davit and heavy tender were also removed, along with the fake funnel – a total of 1800 lbs. The davit was replaced by an aluminum sailboat mast and boom which carries a steadying sail when required and is also used to lift the tenders and toys onto the boat deck.

2. The boat deck was extended aft 6 feet in aluminum and fiberglass to cover the cockpit and replace the previous canvas arrangement. The boat deck is now 18 feet long and 11 feet wide.

3. The hull was lengthened by five feet – adding a large comfortable platform 16” above the water line for boarding, fishing, dinghy handling, diving and so on, protected by a stout black polymer rub rail, with access through two open bulwark doors. The structure, built-in heavy-duty glass with ¾” bulkheads and hull sides in vinylester resin. created a lot of extra buoyancy. This adds to stability, and by lengthening the waterline the boat gained about 0.75 knots at cruising speed revs with a corresponding reduction in fuel consumption. The hull extension holds a fresh water ballast tank with the capacity of 750 gallons. This is potable water and can be used at any time.
Note:- All of the work and installations were completed at Delta Marine in Seattle in the winters of each year.

4. The 13kw generator was removed – reducing weight by another 800 lbs.

5. Decks and new cockpit were painted in non-skid Imron in 2012.

6. Lazarette with extensive workshop under large hatch in cockpit.

1. All new batteries. 2012. There are 6 x 8D house Gel cell batteries each of 120 amp-hour capacity, and two 4D’s for a total of 880 amp-hours. There are two AGM starter batteries each of 80 amps, wired in parallel, and in addition two tender batteries also each 80 amps, used for the electric outboards, that can be connected to the start batteries with a high amp switch. All this means that there is total redundancy. The vessel can operate for 24 hours without requiring any recharge. These batteries have never been discharged below 12 volts and are still in excellent condition.

2. Honda 2000 emergency generator purchased 2012. This is not required as long as the boat is motored 2 hours per day. It is quiet and a 2 to 3-hour operation is sufficient to recharge back to 13.2 volts in any-24-hour period that the main engines are not operated.

3. Balmar Alternator, 125 amps. This was installed on the port engine and charges only the house bank. Since the house bank is never discharged below 12 volts, the amps consumed (50% of capacity – 400 amps) can be replaced with about 3 hours of running. On the starboard engine is a Motorola 60-amp alternator that charges only the start batteries. Note that there is no cross connection provided between start and house banks. This prevents mistakes and as a result the main engines have never failed to start, even after the winter haul out, and the house batteries have never been below 12 volts.

4. Ground tackle. This was all replaced in 2017/18. The new windlass is by Maxwell, model HRC10 12 volts. Serial number BUD0664. There are 250 feet of 5/16 high test galvanized chain, and in addition another 200 feet of ¾” nylon rode is available. The anchor is a 60lb stainless Bruce, installed on a swivel. On the swim platform is a 20lb galvanized Danforth anchor, and in addition, 600 feet of polyester rode mounted on a reel for stern-to operations.

5. Fresh water pumps. There are two fresh water pumps on board, one installed in 2012, and a second, also 2012, which is carried as a spare. Hot water is supplied by a 10-gallon water heater that is heated by the port engine cooling circuit, or electrically from shore power when plugged in.

6. Black water holding tank and all plumbing. This is a completely new 40-gallon system installed by the owner in 2016. The system allows for discharge to the tank, or direct overboard when offshore. The tank can be pumped either overboard when offshore, or to a shore side facility. The heads were also replaced in 2013.These are 12-volt electric.

9. Salon built-in furniture 2015/16. This was constructed in ply, covered with vinyl fabric, and upholstered with 5” foam pads which are covered in Sunbrella fabric, by Canvas Supply of Seattle. When the backs are removed, the furniture creates 3 single beds. The seats are 20 inches high, allowing for uninterrupted views out the windows, as well as 23’ x 1.8’ by 3’ feet (124 cubic feet) of storage space in lockers underneath, which have access through doors on the face as well as hatches from on top.

10.  Folding cockpit dining table for 6 in Starboard, 2017. This allows dining for six in the shade of the boat deck, and sheltered from the wind. There is also a Starboard propane locker and two tanks.

12.Instruments and control 2015 to 2018. The original equipment consists of a Ratheon 10-inch Radar and a depth sounder, both working well. Additions are:-

1. Equipment on board when purchased in 2011

3. 14-foot paddle board- excluded from sale

This vessel runs at 8.3 knots at 1300 revs consuming 3.4 USG per hour. This modest fuel consumption has been measured over 2000 hours of operation and is accurate. The motors are capable of 2200 revs, but the boat is not been operated at those revs except for a few minutes at a time. It attains 15 knots and and burns 18 gallons per hour at those revs. At the cruising speed, the 800 USG fuel capacity with a 10% reserve gives the boat a 212- hour range which translates to 1,800 miles when operating at 1300 revs. We fuel just once per year and can therefore wait for the best deals and opportunities.

The engine room is well insulated and at cruising revs 67 decibels are recorded in the salon, but only 58 decibels in the pilot house, and less down below.

Meridian is a large, functional, efficient trawler, designed for the lowest possible maintenance, available at a modest price. It is an excellent family cruiser and has spent 8 trouble free years cruising the waters of the Salish Sea between Olympia and Desolation Sound in comfort and safety each summer for 4 to 5 months. The boat has accommodated three couples easily, and at times as many as three couples and five kids for three weeks. There is lots of deck space and room to store toys – including the 2 kayaks, paddle board, 16-foot sailing dinghy and 13-foot tender which she currently carries. 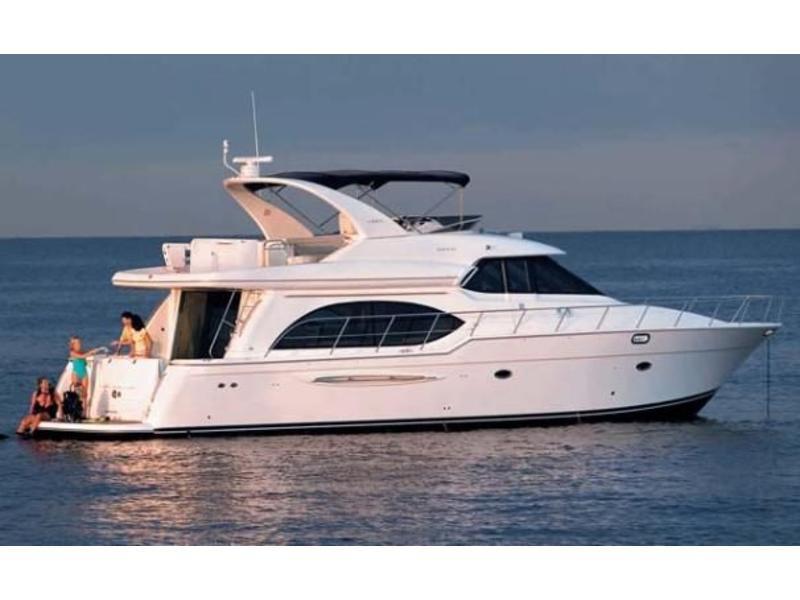