Specifications Details
A true must see! This ship has been refitted from 2005-2016!
United Yacht Sales is pleased to assist you in the purchase of this vessel. This boat is centrally listed by Bluewater Yacht Sales. It is offered as a convenience by this broker/dealer to its clients and is not intended to convey direct representation of a particular vessel

The vessel was originally constructed of conventional Navy lighter design with a plumb stem, rounded bilge and rounded stern. During the refit, the bottom was completely replaced and a raked stem was welded to the bow, adding an additional 12 feet to the overall length and creating a collision bulkhead by incorporating original bow as bulkhead. The hull is comprised of steel plating welded to a grid work of steel stringers and frames. It is constructed with four transverse watertight bulkheads dividing the hull into a forepeak, crews quarters, guest and owner berthing, engine room and lazarette. The main deck of the vessel is provided with welded bulwarks around the perimeter. Access to the engine compartment is gained through a hatch located at the after section of the cabin. The initial superstructure consisted of a fabricated steel hard top over the mid-body cabin space. The cabin has since been extended and the pilothouse completely reconfigured.

The main deck is configured with a raised foc'scle with welded bulwarks around the perimeter; the periphery of the 01 deck is fitted with stainless steel rails and stanchions. Access to the 01 level is provided by stairs located forward of the house.

The fantail is sheltered by the 01 deck, which is supported by steel columns. It is enclosed with steel bulwarks and stainless steel railing. The deck is accessed via the aft cabin. It is provided with two 18" hydraulically actuated gypsy heads intended for use while docking the vessel.

The superstructure consists of a fabricated steel hard top over the mind-body cabin space with access gained through hatches forward and aft. The Pilothouse is located forward on the centerline of the O2 deck and is accessed by port and starboard doors. The exterior of the pilot house is provided with controls on either wing for operation of the vessel while docking and undocking. The interior, which has been entirely reworked, will contain the vessel's navigation control stations with the helm located in the centerline. A Captain's lounge is been configured aft of the pilothouse which has been provided with Iroko paneling and fitted with safety glass windows.

The exterior of the cabin is comprised of painted steel where the interior, like the pilothouse, is undergoing refurbishment. The cabin is comprised of an upper level main saloon with a galley/small food preparation area, laundry located to starboard and a head and small bar to port from which the pilothouse is accessed via a spiral staircase. The salon is located forward in which a small fireplace has been installed. The side walls have been provided with Iroko wainscoting and the bar has been installed. A small laundry and food storage area is provided forward in which a washer/dryer and freezers have been installed. Access to the lower staterooms in the form of a steel spiral staircase. The interior is provided with safety glass panels on both sides.

The engine room is accessible from the fantail through a catwalk installed beneath the stack in which all exhausts pass. The area is provided with a hydraulic oil tank and diesel fuel day tank. The engine room has been suitably laid out, is well lit and provides good access to all engines, auxiliary equipment and electrical panel board. A small utility room had been provided aft of the engine room which contains much of the steering apparatus and spare parts. A watertight door is installed through the bulkhead for access to the steering quadrant. With the exception of the battery installations, the engine room is complete although some additional upgrades may be necessary in future maintenance periods.

Both Engines are air start with pressure provided by a compressor located on the starboard side of the engine room. The engines are securely mounted to the stringers.

All of the wiring within the vessel is bundled and identified with no exceptions observed, 240 volt, 100 amp 3 Phase AC power is provided by the ships' generators, all of which can be paralleled and are located in the engine room. The wiring had been reconfigured to accommodate two phase converters, both of which have been installed in the engine room. Numerous other transformers have been provided to convert both shore power and generator power to the various electrical needs of the vessel.

A bilge manifold has been configured to access all watertight compartments. All of the valves are marked to indicate the compartment they serve.

The vessel has been provided with several welded steel sea chests created for raw water supply to the propulsion engines, generators and auxiliary equipment.

Progress observed during the most recent survey indicates that the primary work effort has been focused on the completion of the living quarters, which for all practical purposes, has been completed. The quarters have been delineated through the creation of guest and owners staterooms on the lower level, aft, with additional quarters provided forward for members of the crew. Insulated bulkheads and cabin sub floors and finished floors, plumbing and electrical lines have been run and air conditions ductwork installed. Sewage tanks have been installed under the companionway sole and under the bunks of both forward staterooms. The joiner work to all cabins and crew quarters is complete with the exception of some minor trim. The woodworking is of high quality. Access to the quarters is provided via a spiral staircase from the forward section of the salon. A passageway has been provided for access to all cabins and the crew's quarters. The lower compartments have been sectioned in the following manner: the owners' stateroom, head and shower, aft and to port; two additional two man cabins with heads and showers are provided forward of the master suite with a similar arrangement of two 2 man cabins created on the starboard side. Forward of the two starboard cabins is a two bunk captains quarters where a head and shower has been provided. Forward of the captain's quarters, a laundry has been provided in which twin Kenmore He2 washers and dryers have been installed. 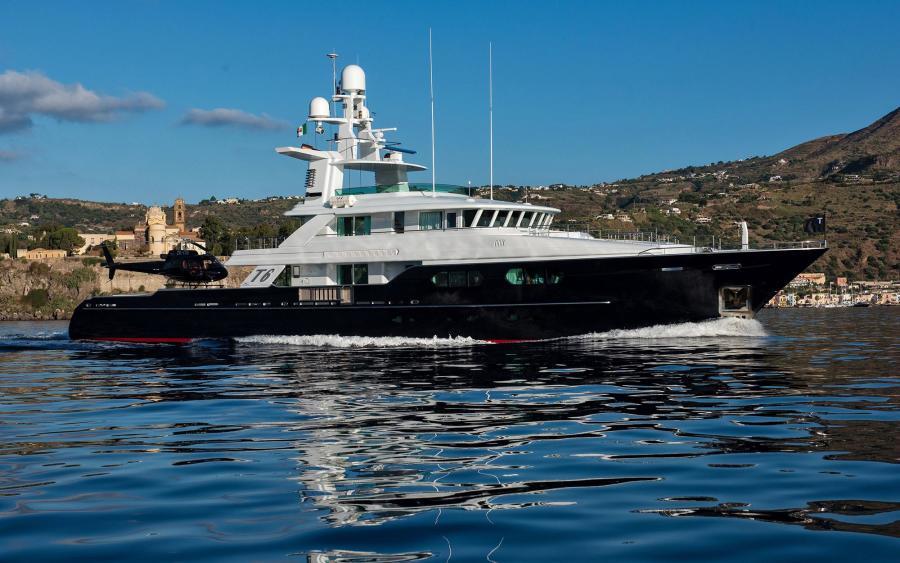