True North is a 2001 Broward 118' Raised Pilothouse MY listed for sale with United Yacht Broker Samantha Gauld. Samantha can be reached at 1-978-590-2806 to answer any questions you may have on this boat. United Yacht Sales is a professional yacht brokerage firm that has experience listing and selling all types of Broward Yachts and similar boats.With over 200 yacht brokers worldwide, we have the largest network of boat buyers and sellers in the industry.

The maintenance log and 2015 survey are available for review. Engine overhaul in 2015 with detailed records. Corporate owned, the Board is ready to sell this outstanding Broward yacht.

This yacht comfortably accommodates 8 people in 4 luxurious staterooms plus 5 crew in 3 cabins. The interior features a rich mahogany finish throughout complimented by a spacious thoughtfully designed interior. The main deck features a gracious salon with full bar and entertainment center. Forward the main salon is the formal dining area. The large aft deck with walk up bar and a convenient galley forward complete the main deck.

The flybridge can be accessed from either the raised pilothouse or the aft deck spiral staircase. The flybridge features a main helm station to port. Aft the helm is a full bar to starboard and a large table with settee to port.

Day head to port with toilet forward, marble tiles and countertop, mirrored wall panels, access to doghouse and entertainment equipment locker, stairwells to starboard to access pilothouse and lower guest accommodations, doors to port and starboard for access to side decks and boarding gates, access forward for the Formal dining, galley and crew accommodation.

This area is accessed from the galley stairwell and comprises of three crew cabins and a laundry space. Forward to starboard is the Captains’ cabin, with a large bed outboard to starboard and a TV mounted on the forward bulkhead. Inboard to port and forward is the bathroom with head and separate stall shower. Aft of the Captains’ cabin to port is the large shared bathroom with head and separate stall shower. Aft are the two crew cabins which are mirror images of each other and come with upper and lower bunks and good storage in lockers and drawers.

The Gym is accessed from the watertight hatch on the transom and comes with a large fridge and freezer installed aft to starboard. There is good storage to port and starboard in built-in cabinetry. The day head is forward to starboard and comes with a toilet, sink and separate stall shower. The gym equipment is installed in the center of the space with the engine room entrance forward on the centerline.

Aft to port is raised “L” shaped bench seating with table in front, helm on centerline, storage in step drawers and below seating, safety equipment stored above port lockers, stairwell to starboard to access guest areas and galley.

SIDE AND FORE DECKS:

This area is accessed from the watertight transom door via the gymnasium. There is full standing headroom with excellent access to all the machinery to carry out all service work.

Our Broward Yachts listing is a great opportunity to purchase a 118' Motor Yachts for sale in Casa del Campo, - Dominican Republic. This Broward is currently listed for $1,999,999. For more information on this vessel or to schedule a showing, please contact United Yacht Sales broker Samantha Gauld at 1-978-590-2806. 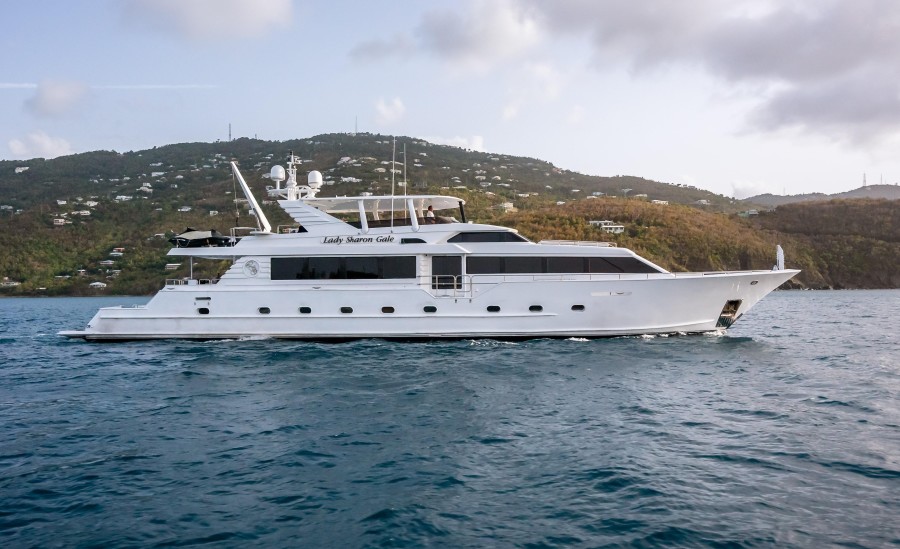